The Dallas Telegraph College opened in 1889 and admitted both men and women as students (if not from the beginning, certainly by the early years of the new century).

Below, the text of a 1908 ad — published in a San Antonio newspaper in hopes of drawing students to Dallas from around the state — rather optimistically promised hard-working students the possibility of earning an “enormous” salary and maybe even becoming the head of a railroad!

The Dallas Telegraph College is a school of more than state reputation. Prof. L. C. Robinson is president, with J. E. Hyle as superintendent. As is well known, telegraphy is not only one of the pleasantest of studies, but offers a brilliant career to the man who ‘makes good.’ A great many railroad presidents started as operators. The men who have made good now head railroad systems at enormous salaries. What one man has done, another may do. The Dallas Telegraph College has been a chartered institution for fifty [sic — this should be “twenty”] years. Why not send for one of their beautiful catalogues?

According to a 1912 article by Lewis N. Hale on Texas schools and colleges in Texas Magazine, the students learned to ply their trade by tapping (…as it were) into the actual railroad telegraph lines which, rather conveniently, ran right through their classrooms. A very murky photo from that Texas Magazine article is below. 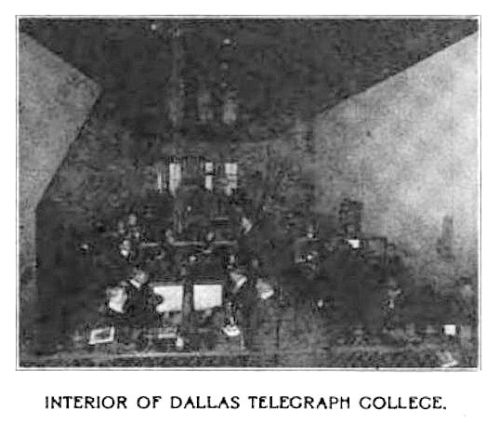 The goal of students was to secure employment in a nice, well-appointed office, such as the Seattle headquarters of Western Union, shown below. 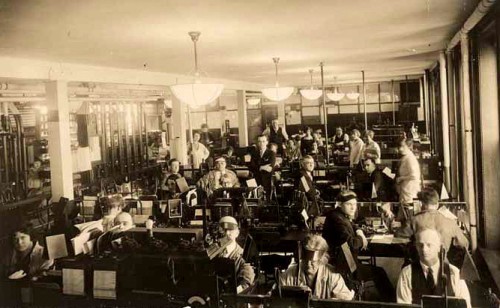 Next stop: an enormous salary!

Western Union photograph from the University of Washington Library’s Museum of History and Industry Collection, with details here.

An entertaining read on the history of telegraph service in Texas by Mike Cox can be found here.

The Handbook of Texas entry on telegraph service in Texas can be found here.

Absolutely EVERYTHING that you (and Ed McMahon) would ever want to know about the telegraph and telegraphy is here.

One Comment to “Start Your Brilliant Career at Dallas Telegraph College — c. 1900”