The Republic National Bank Building: Miles of Aluminum, Gold Leaf, and a Rocket

THIS is another great idealized image of a great building, The Republic National Bank Building, built in 1954. The blurb on the back of this postcard reads:

40 stories, cost 25 million dollars, the world’s tallest building faced in aluminum and glass.The mighty half-billion candle-power beacon atop the 150-foot spire is visible up to 120 miles.

This building was built to be the tallest building in Dallas — to dwarf the rival Mercantile (by a whole 53 feet!). Which it did for a while — it boasted of being the tallest building west of the Mississippi. Until … the Southland Life building came along a few short years later and knocked it off its pedestal (although, dammit, it was the “WORLD’S TALLEST BUILDING FACED IN ALUMINUM AND GLASS”!). For years, the powers-that-be seemed overly concerned with the “tallest” building thing and engaged in architectural pissing contests for years.

But forget the exterior. INSIDE. Lordy. Legendary bank president Fred Florence went all out, with Life magazine saying the lavish interior reflected Florence’s belief that a bank’s design and appointments should be “an outward showing of solvency.” This included generous helpings of gold leaf, inlaid teak, and endless marble imported from Italy and Peru (“nearly as long as a football field”). One wonders if Florence muttered something about “Rosebud” on his deathbed. Of its forty-one teller’s cages, two were — for some reason — reserved exclusively for women. There was a full-time gardener on staff. And, of course, there were “gold curtains in the executive washrooms.” There was “all-season air-conditioning.” There was a motor bank in the basement. And, if they couldn’t have the tallest building in town, they were damn sure going to have the fastest elevators in the elevator-using world. And they did.

And then there was that rocket. I love that rocket. Sixty years later, it’s still one of the most recognizable buildings on the skyline. 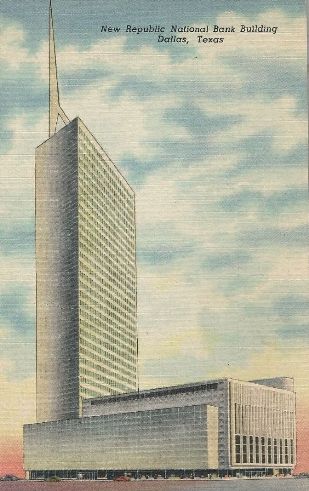 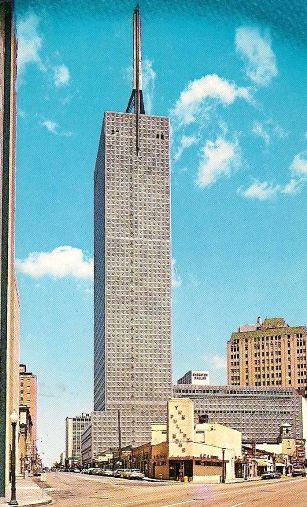 The missed-by-my-mother’s-generation Pulley Bone diner is in the foreground (click for larger image).

An absolutely fantastic collection of photographs apparently shot by Life magazine to accompany the article from their Feb. 28, 1955 article (linked below) but not used (and, seriously, check them out) are on an unassuming message board. Scroll down a little ways and you’ll see 13 large images of the interior and exterior — see them here. (UPDATE: These photos seem to have disappeared. I’ll keep the link in hopes that user “Dallas boi” will repost!)

Scroll through the 4-page spread “Dazzler for Dallas: Its New Bank is Huge, Handsome and Full of Gold” in Life magazine (Feb. 28, 1955) here.

And here are a couple of readers’ responses to the story, which appeared in a later issue (Mrs. Ward Derhammer is not amused):

Republic National Bank Building info from the Republic Center website can be found here, from Wikipedia here, and from the Dallas Public Library here.

All postcard images (except the first one) are larger when clicked.

10 Comments to “The Republic National Bank Building: Miles of Aluminum, Gold Leaf, and a Rocket”