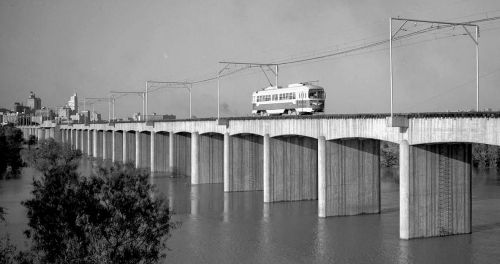 Streetcar on the Trinity River Viaduct (click for larger image)

A few days ago I posted a photograph of a streetcar pulling into Oak Cliff, having just crossed the Trinity River Viaduct (link below). In this photo, we see what streetcars of the period looked like actually crossing the viaduct.

Photos of these double-ended streetcars taken from a distance present a bit of a Pushmi-Pullyu problem in determining which direction they’re heading, but if you enlarge the photo at the Denver Public Library link just above, you can see the silhouette of the operator at the eastbound end of the car, driving the car toward Dallas. UPDATE: I’m wrong! The car is moving toward O.C., not Dallas! That motorman silhouette is a figment of my imagination! See the comments below for tips on how an amateur like myself who’s never actually seen a streetcar can tell which direction one is moving. (Thanks, Bob and Bob for the correction!)

Streetcars ran back and forth across the Trinity River on a special trestle just south of the Oak Cliff Viaduct/Houston Street Viaduct. It had been in use since 1887 (through various renovations) and was demolished in the early 1970s to build the present-day Jefferson Street Viaduct. The streetcar shown is from the Dallas Railway & Terminal Co. fleet.

My previous post mentioned above, “Waiting for a Streetcar on a Sunny Winter Day in Oak Cliff — 1946,” contains a fantastic photo taken by the same photographer, four months earlier, showing people waiting for the approaching streetcar just after it’s crossed the river; that photo can be seen here.