The drawing above was architect J. N. McCammon’s design for a new 14,000-square-foot concrete-and-stucco building of a new Lakewood development, at Abrams and Gaston (a stone’s throw from land now occupied by the parking lot of the Lakewood Whole Foods). It was to be built by Rae Skillern, whose Skillern’s drug store would anchor the development, with a Wyatt Food Store also occupying a large chunk of the property. The “retail village” was to be modeled (…somewhat) after the much-lauded Highland Park Village shopping center, and its design was described in articles as being “modernistic.”

Construction was to begin in early 1934 and be completed in 90 days, but things hit a bit of a roadblock when Lakewood residents objected to a shopping area in their “high-class” residential neighborhood (charming though Skillern’s design might have been…). A zoning classification change from “local retail” to “residential” was sought by concerned Lakewood inhabitants, but the City Plan Commission nixed this and gave the builders the go-ahead.

Skillern’s No. 4 opened in December of 1934 at 6401 Gaston and humbly hailed its newest emporium as “America’s most beautiful drug store.” It was, by far, the largest in the local company’s quickly expanding chain, and it featured a large, varied inventory, beautiful fixtures and innovative merchandising, a large soda fountain (with curb service), a “perfume bar,” and an open view into the “prescription department” where customers could watch the pharmacists doling out their medications.

The small shopping area quickly became a popular shopping destination (along with the larger Lakewood Shopping Center across Gaston), and the big, new Skillern’s — which sat at the point of the triangular-shaped “village” — was its focal point.

Skillern’s left its cool building sometime around 1971, after a fire caused heavy damages in November, 1970. It moved across the street, into the equally cool old Gaston Avenue Pharmacy (known familiarly as Doc Harrell’s drug store, the place with the iconic conical roof), not long after Harrell’s death in 1969. The Lakewood outpost of the Mickey Finn’s chain of pool halls opened in the old Skillern’s space in February, 1972. In 1978 the property was condemned by the city to make way for the weird Abrams Bypass, which cut through that northeast corner of the Gaston-Abrams intersection; several buildings in the immediate vicinity deemed to be in the way of progress were demolished, including Rae Skillern’s “modernistic” drug store, a Lakewood landmark for over 40 years. Pity.

Skillern’s was located on the northeast corner of Gaston and Abrams at the tip of a triangular-shaped piece of land. The drawing at the top shows Abrams running vertically (to its west), and Gaston running horizontally (to its south). It would have faced the old Dixie House space. The Abrams Bypass skewed everything, but it was about where the little triangular “park” is now — between Abrams Parkway and Abrams Road, just west of the Whole Foods parking lot. (UPDATE: I now know that that greenspace has a name: Harrell Park!) Below is an aerial photo of what this part of Lakewood used to look like. Gaston is in yellow, Abrams is in blue, the Skillern’s building is circled in red, and the Lakewood Theater (for reference, because this all looks pretty freaky to us today and it’s hard to get one’s bearings) is circled in white. Looking northeasterly. 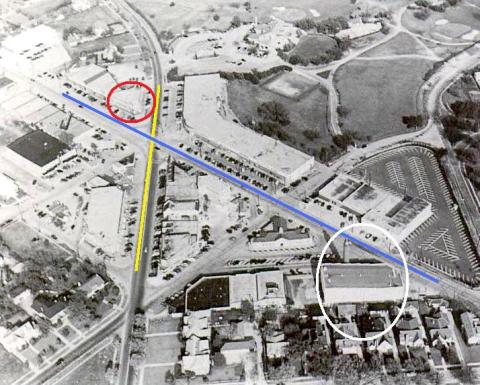 An interesting account of the how the bizarro Abrams Bypass happened can be found in the D Magazine article “Why Lakewood Doesn’t Trust Itself” by Charles Matthews (Oct., 1978), here. A Dallas Morning News article on the same topic — “Lakewood Plan May Benefit Bank” by Henry Tatum (March 12, 1978) — can be found in the Dallas Morning News archives.