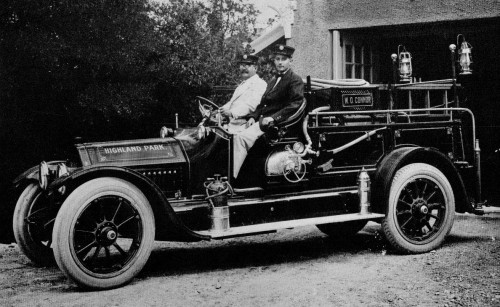 Above, Ed McGoldrick — who was both police chief and fire chief for Highland Park — sits behind the wheel of HP’s new fire engine. It even had a  name — “W. O. O’Connor,” after the mayor. Seated next to Chief McGoldrick is most likely Capt. Scott Hughes of the Oak Lawn fire station. The engine was tested, deemed satisfactory, and accepted into service on June 4, 1914 on the day the new Highland Park City Hall was officially opened. (Click article below to see larger image.)

J. E. McGoldrick was apparently something of a peace officer renaissance man. He was an officer on the Dallas Police force from about 1902 to 1912, and then became head police and fire honcho in Highland Park from 1912 to 1917 (where he was also the Street Superintendent). At the same time he was serving as HP Chief Peace Officer, he was also appointed to head the Game Commission of Dallas County. In 1917, he resigned his position in HP to accept a job at SMU where he “would have charge of buildings and grounds” (DMN, June 6, 1917). In 1924, he was appointed Chief Peace Officer of University Park.

That SMU move seems like a bit of a weird detour for a career policeman, but even weirder is the following sentence, which appeared in the blurb about his University Park appointment:

“[McGoldrick served as the chief peace officer of Highland Park] until 1917 and then undertook confidential duties for the United States Government. During the past two years he has been connected with Sanger Bros.” (DMN, Oct. 5, 1924)

James E. McGoldrick died in October, 1927 when he suffered a heart attack while eating his lunch in a drugstore at Main and Lamar. He was 54. His obituary mentioned that he had been “connected with a meat market” in his post-public-service life.

But back to the photo. It’s great. There’s nothing quite like the smell of a new fire engine. And Chief McGoldrick looks very proud.

Photo from a postcard issued as part of the Park Cities Bank “Heritage Series” in the 1970s; the credit line on the postcard reads “Donated by the Town of Highland Park.” Thanks to the Lone Star Library Annex Facebook group for use of the image.