The Nellie Maurine: When a Pleasure Boat Became a Rescue Craft During the Great Trinity River Flood of 1908

107 years ago today — after days and days of torrential rains — the Trinity River reached a crest of over 52 feet, and the resulting flooding caused loss of life and property and almost incalculable widespead damage on both sides of the suddenly surging river. Bridges and train trestles were washed out, cutting off any way for Dallasites or travelers heading west on trains and interurbans to get from Dallas to Oak Cliff, and vice versa. Ever the home of the entrepreneurial capitalist, the owner of one of the only large boats in the area, the Nellie Maurine, offered his water vehicle to be used as a ferry for those souls desperate to cross the river. For a price.

In September of 1906, E. L. Gale built a large boat in Dallas. It was designed to carry freight as well as passengers on pleasure trips between the “wharf” at the base of Commerce Street and the under-construction Lock and Dam No. 1 at McCommas Bluff. The boat was named after his daughters Vanelle and Maurine.

The Nelle Maurine is a model bow, flat-bottomed boat, seventy feet in length, sixteen-foot beam on the water line, and twenty feet including the guard rail. She is a propeller boat, draws twelve inches of water, and is driven by a 40-horsepower engine. In the event it be found that the engine is not of sufficient power to give the boat the required speed, it is so arranged that it can be changed to 80-horsepower with but very little trouble. With full cargo aboard, the vessel will require a depth of about thirty-three inches of water. (Dallas Morning News, Sept. 29, 1906)

Gale envisioned great success in establishing shipyards and a wharf in Dallas. Though the much hoped-for “navigable Trinity” was still not a reality, many believed a trade route waterway between Dallas and the Gulf of Mexico was inevitable. A person could make a great deal of money by being in on the ground floor of such an industry.

The boat, initially a propeller boat which was converted to a sternwheeler in the summer of 1907, had trouble in operating along the short stretch of river with any kind of regular service — the water level was either too low or too high (when the water was high, the boat could not pass beneath the “Zang boulevard bridge”). The Nellie Maurine was often moored near a large cottonwood tree waiting for the river to cooperate. When it did cooperate, the boat was in demand as a pleasure craft, often offering moonlight treks down the river, complete with onboard dance band. The fare for a daytime round-trip to McCommas Bluff was 50¢; the privately chartered night-time cruises were likely quite a bit higher. 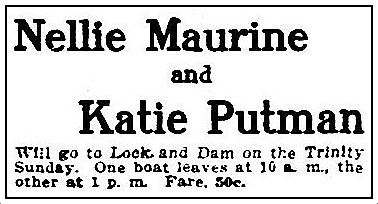 When the Great Flood of 1908 hit on May 25, there was absolute bedlam, beginning in the middle of the night when one man set off several “dynamite bombs” one after another in order to awaken his neighbors who were unaware of the sudden and unexpected rise of the swollen river and who were in imminent danger. When Dallasites went to bed on May 24, the river was at an already high 28 feet. By 3:00 in the morning, just a few short hours later, it had risen to an incredible — and incredibly dangerous — 41.5 feet. By that afternoon it was over 51 feet, and by nightfall, it had surpassed all records and was at more than 52 feet. West Dallas and downtown were underneath water. Homes and livestock were washed away. Electricity was out. Telephones were out. Roads and railways were impassable. There was absolute panic.

For numerous reasons, people were desperate to cross the river. As all roads and bridges across the Trinity were submerged or destroyed, the only way across was by boat. The Nellie Maurine’s owner saw an opportunity to make a lot of money — by charging people to ferry them back and forth across the Trinity, something that probably rubbed people the wrong way. When city authorities asked permission to use the Nellie Maurine to survey the damage, they were rebuffed when Gale (or his captain) insisted the city pay a fee and the city refused. Dallas County Sheriff Arthur L. Ledbetter and Criminal District Judge W. W. Nelms were having none of that and seized the boat, deputizing the crew and ordering them to set off for the west bank of the river. As it turned out, the damage was far worse than anyone could have expected, and the boat was used to rescue stranded people, some of whom were pulled from treetops. (The account of this survey, titled “West Dallas Trip Proves Thrilling,” is pretty gripping — see link below.)

When the city was done with its search-and-rescue mission, it UN-seized the boat, and the Nellie Maurine began operating as a ferry again, transporting frantic people back and forth across the river. If you wanted to cross the river, you’d have to cough up one dollar — maybe even two, a hefty price to reach safety. (According to the Inflation Calculator, $1 in 1908 would be the equivalent of about $26 in today’s money). It was rumored that this ferry service was generating $1,000 a day (almost $26,000 a day in today’s money!).

The Nellie Maurine provided a much-needed service during the Great Dallas Flood — and they also made a substantial profit, which — depending on your business philosophy — is either ingenious or appalling.

Below, a few images of the Nellie Maurine. I’m not sure what ultimately became of her, but I have found no mention of the boat past 1910, a year before E. L. Gale died. (Click pictures for larger images.) 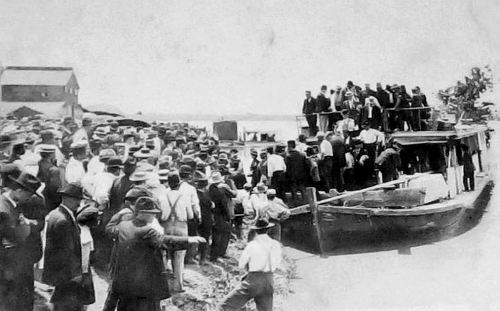 Two photos of the boat taken during the flood (the boat had lost its pilot house when it was caught under the Commerce Street bridge earlier that day). (These two “real photo postcard” images found on eBay.)

Below, a post-flood photo from 1909, showing builders and contractors onboard, about to head to Lock and Dam No. 1 to check on its progress.

Clippings and photos from The Dallas Morning News, as noted.

Read about the introduction of the Nellie Maurine (or the “Nelle Maurine”) to Dallas newspaper readers in an article published in The Dallas Morning News on Sept. 29, 1906, here. (The second photo above accompanied this article.)

Read the account of what was seen from the boat when it was commandeered by city officials in “West Dallas Trip Proves Thrilling,” published in the DMN on May 26, 1908, here.

Read more about the flood in these articles from The Dallas Morning News:

The Trinity River flood of 1908 was a story that made national headlines. The death-toll reports were all over the place, from 4 to “hundreds.” I think the official number of lives lost was only 4 or 5, which is pretty amazing, considering the the massive destruction caused by the flood. An interesting first-day report can be found in the Wichita (Kansas) Beacon, in a late edition from May 25, 1908, here. “Trinity Is On a Rampage” — indeed.

An incredible photo of the washed-out T & P railroad trestle can be found in a previous post here.

7 Comments to “The Nellie Maurine: When a Pleasure Boat Became a Rescue Craft During the Great Trinity River Flood of 1908”