The First Methodist Episcopal Church, South (now First United Methodist Church of Dallas) was built in 1924 and 1925 at Ross and North Harwood. It was a large undertaking, and its construction meant that three of the four very large houses in the 1900 block of Ross Avenue, between North St. Paul and North Harwood, had to be demolished, including the house built by Mrs. Miranda Morrill in 1886 at the southwest corner of Ross and Harwood.

For many years, large houses like this — owned by the city’s wealthiest bankers, industrialists, and real estate men — lined Ross Avenue, just to the north of the central business district. But by the 1920s, more and more non-residential development began to encroach into this part of town.

The photograph at the top is pretty amazing, because it shows some of those grand houses in their last days. The north side of the 1900 block of Ross (the block now occupied by the Dallas Museum of Art) contained four lots. In the 1925 construction photo above, there are three houses and a business.

In the detail above, at the far left we see the home of land baron William Caruth (in the book Dallas Rediscovered, William L. McDonald called this little pied-à-terre his “townhouse”) — for decades it sat at the northeast corner of Ross and St. Paul (which had previously been named Masten). Next to it is something that looks like scaffolding or a tower (what is that? — is it a photographer’s perch to document the construction?). Next to it is another grand house, home of several wealthy occupants over the years. And then … a car dealership and garage. How this happened is a mystery, but this 1921 building — which replaced a beautiful house and which sticks out like a sore thumb — belonged to the Flippen Auto Co., complete with showroom on the ground floor and garage and repair facilities on the second floor — it may have had one of the first car elevators in town.

Next to the Flippen Auto Co. was the grandiose Conway House, with its columns and portico; it was built around 1900 at the northwest corner of Ross and Harwood and was the childhood home of pioneer female fashion illustrator Gordon Conway. In 1921 — after a few years as a music conservatory — it became the home of the Knights of Columbus. 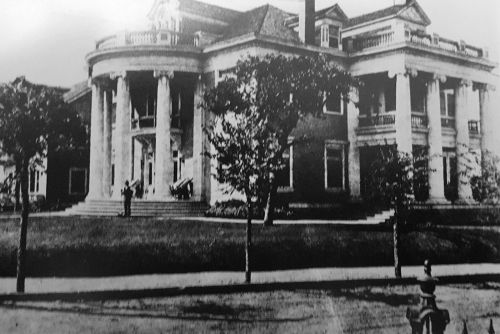 And here’s a photo showing both the Flippen Auto Co. and part of the former Conway House.

On the northeast corner of Ross and Harwood, we can see a large house facing Harwood. Forget the house — on that corner was a tiny little gas station. And glory be, I stumbled across a great photo of the Acme Oil & Supply Co. complete with Texaco pump — probably from around 1919 or 1920. 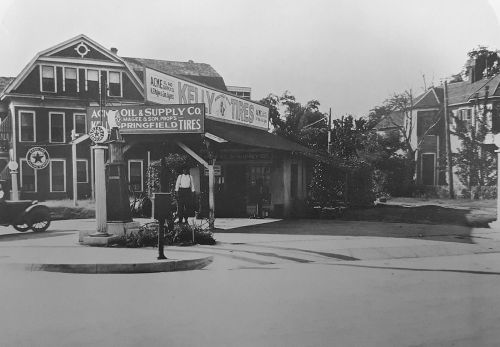 But back to the construction of what is now the First United Methodist Church of Dallas — a lovely building which still stands and faces the Dallas Museum of Art. Here’s a photograph of the construction from May, 1925.

And here is the postcard filled with an artist’s conception of people to-ing and fro-ing. 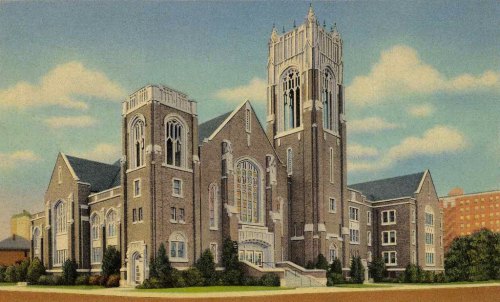 And, finally, an aerial view taken above the church in the early 1980s, looking north, showing the same block once bookended by the Caruth and Conway mansions, now leveled to make way for the Dallas Museum of Art.

I think I prefer the view from 75 years earlier.

The two photos taken in 1925 during the construction of the church are from the book Church at the Crossroads, A History of First United Methodist Church, Dallas (Dallas: UMR Communications, 1997); the entire book has been scanned and may be viewed at Archive.org, here (all the photos are at the end).

The photo of the Morrill house is from Mark Doty’s book Lost Dallas (Charleston: Arcadia Publishing, 2012).

Photo showing the Flippen Auto Co. and the Conway house from Diane Galloway’s book The Park Cities, A Photohistory.

Photo of the Acme gas station is from Dallas: The Deciding Years by A. C. Greene (Austin: Encino Press, 1973).

The construction of the First Methodist Episcopal Church, South was announced in a Dallas Morning News article on Oct. 5, 1924. 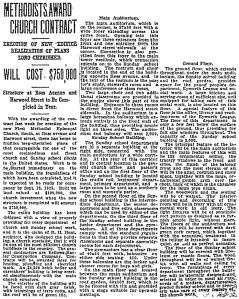 All that’s left of those grand homes is the Belo Mansion. It’s something!