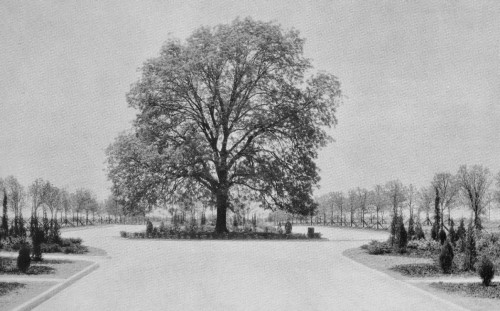 Ever since I realized that 2015 was the sesquicentennial for what may the world’s most famous pecan tree, I’d planned to do a nice post worthy of such an occasion. Except that, as usual, time seems to be slipping away from me, and I have time today to post only a few photos of one of my very favorite local landmarks.

The pecan tree — or, the Pecan Tree (it deserves to be capitalized) — is in Highland Park on Armstrong Parkway at Preston Road, and if you grew up in the Dallas area, driving past the huge tree decorated with lights is an annual Christmas ritual. I remember when I was going through my sullen teen years how I always rolled my eyes when my parents said we were going to go see the Pecan Tree — but when we got to the tree and saw it … it was just wonderful.

The tree began life in 1865 (!) as a sprout in the middle of a cornfield owned by the Coles, one of Dallas’ pioneer families. In October of that year, young Joe Cole, just returned from the Civil War, was working the field and discovered the little plant in a furrow, crushed under the wheels of his wagon. The story goes that Joe, still overwhelmed from the horrors of war, got out of his wagon and replanted the sprig, taking pains over the years to make sure it grew into a large healthy tree. And it did.

I discovered recently that the very first house I lived in was Joe’s old farmhouse, part of which, somehow, was still standing across from North Dallas High School into the 1980s. I’ve always felt a kinship with that tree, and it’s nice to know that my very first home was the home of the man responsible for the tree that has given so much pleasure to so many people. Thank you, Joe!

Below, a short, six-and-a-half-minute film about the history of the tree, produced by KERA: “Million Dollar Monarch,” directed by Rob Tranchin. 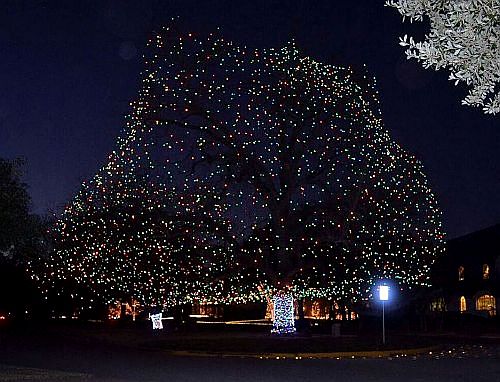 UPDATE: Sadly, the Pecan Tree did not make it to its 154th Christmas. The Highland Park landmark was cut down in October, 2019, a victim of age and disease. The nearby “sister tree,” which was grafted from the older tree in the 1950s, has taken its place on center stage. Several articles on this sad development can be read on the Park Cities People website here.

First two photos were reproduced as promotional postcards by the Park Cities Bank in the 1970s; thanks to the Lone Star Library Annex for allowing me to use these images. Source of other photos as noted.

Read about the tree on the Highland Park website, here.

More about the history of the tree can be found in a 1933 article from The Dallas Morning News, with memories from the then-92-year-old Joseph Cole: “Million-Dollar Tree of Dallas, Big Pecan Centering Parkway, Set Up by Hand of Man Now 92” (DMN, March 5, 1933).

A 2012 report on the aging tree can be found in a Dallas Morning News article by Melissa Repko, here.

This famed Pecan Tree was planted in the fall of 1865, which would make this its 150th anniversary. I haven’t seen any mention of this. I know the tree has been in bad shape at times throughout the years, but I’m pretty sure it’s still standing. I haven’t seen the tree this year, but it was still looking pretty impressive last year. Happy 150th, Pecan Tree!