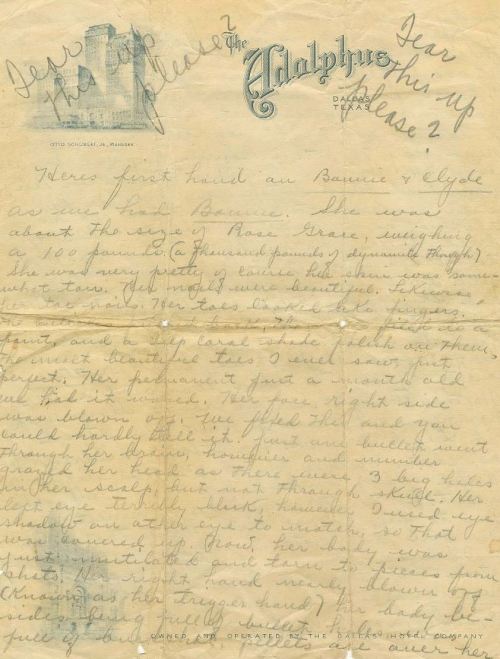 This amazing (and amazingly gruesome) first-hand account of an unnamed McKamy-Campbell Funeral Home undertaker details the incredible amount of work required to prepare the bullet-ridden body of celebrity outlaw Bonnie Parker for burial. This odd little historical document comes from the absolutely fantastic George W. Cook Dallas/Texas Image Collection housed in SMU’s DeGolyer Library. The four-page handwritten document can be viewed in its entirety on SMU’s Central University Libraries’ website here. Below is the full account, transcribed by SMU, with a few corrections/additions made by me.

Heres [sic] first hand on Bonnie & Clyde as we had Bonnie. She was about the size of Rose Grace, weighing a 100 pounds. (a thousand pounds of dynamite though) She was very pretty of course her skin was somewhat tan. Her nails were beautiful. Likewise her toe nails. Her toes looked like fingers. The cuticles pushed back, the nails filed to a point, and a deep coral shade polish on them, the most beautiful toes I ever saw, just perfect. Her permanent just a month old we had it waved. Her face, right side was blown off. We fixed this and you could hardly tell it. Just one bullet went through her brain, however and number grazed her head as there were 3 big holes in her scalp, but not through skull. Her left eye terribly black, however I used eye shadow on other eye to match, so that was covered up. Now, her body was just mutilated and torn to pieces from shots. Her right hand nearly blown off (known as her trigger hand) her body besides being full of bullet holes was full of buckshot, pellets all over her

[Page 2] body. We received body ten minutes of nine. Joe and I sewed on her until three that afternoon. At that time they say 25,000 people were lined up outside. It took 2 hours picking dirt, rocks etc. from her hair then to wash it and have waved. A tattoo on right leg two hearts one read Roy, the other Bonnie. Roy you know was her Husband (Roy Thornton now in Pen) All fluid the undertaker in Arcadia La. used leaked out she was torn up so she was a a [sic] mass of blood, caked & dried. Several hours in bathing her. Had to scrape some of it off, and used gold dust to remove most of it. Had skin slip that night account Fluid leaking from it, began to smell the next morning, turning dark, smelling worse. The last day was rotten so to speak The odor was awful. Her Mother thought [sic] sat in room alone with her head over casket. How she stood it Lord knows. The other children couldn’t. Mother fainted 2:30 that night I asked if she wouldn’t like to go home, she went. By then the entire house smelt. We had to keep her so Sister Billy that was in jail in Ft Worth could get out & come to Funeral. She was buried in an all steel metal casket. Paper said $1000.00 wrong about $600 maybe less. Paper said $1000.00 vault Wrong there was no vault Page 2

[Page 3] Buried in an ice Blue Neglegee [sic] (is this spelled right) She was dressed in expensive clothes when killed. About 40,000 people came to view her. Paper said $1,500.00 damages done to Funeral Home. Wrong about the extent of $2.50. They did not tear windows etc as stated. The woman next door though turned Hose on Them to keep her flowers from being walked on. We had 38 officers stationed (3 shifts) all over house and front & back yard keeping crowd in order and all of us as well. 4 operators on the 4 phones. They rang every minute for two days & nights. More people came to see Bonnie then [sic] to see Clyde. Our new Porch Furniture was damaged. We had a Rubber mat about ½ inch in thickness all over Funeral House. Officers

[Page 4] stationed to keep people on it so as not to wear rug out (Big movie Star) my picture was shown in Movies. The paper stretched their stories. She was not to become a Mother as stated. She was diseased slightly though as stated. Now you have it first hand as I worked on her. Joes [sic] & My work was praised very highly in every other line in papers. And if I do say it, It was good. And she looked swell no trace of disfigures showing. The crowd did not steal anything to take home. All paper talk. Example crowd lined up as Far as Fair Park, now judge how it looked. They brought their Lunches. Such Fools.

Below, two photographs of the McKamy-Campbell Funeral Home, located at 1921 Forest Avenue in South Dallas, besieged by curious spectators.

I’m unsure who the “Rose Grace” was who was mentioned on the first page.

First photo of the McKamy-Campbell Funeral Home is reproduced all over the internet; the second photo is from the files of the Dallas Police Dept., Dallas Municipal Archives, via the University of North Texas’ Portal to Texas History database, here.

Even though the identity of the person who wrote this account is not known, he (…it was probably a man) mentions that he was seen in newsreel footage of the funeral of Bonnie Parker. My wild guess is that he can be seen in this clip from a longer newsreel on the funerals and burials of Bonnie and Clyde at the 2:34 mark. I could never find who his co-worker “Joe” was.

Is this our man laying flowers on Bonnies casket?

If you really want to see the state of the bodies of Bonnie (and Clyde) — before and after their time with their undertakers — they’re easy to find via your favorite search engine.