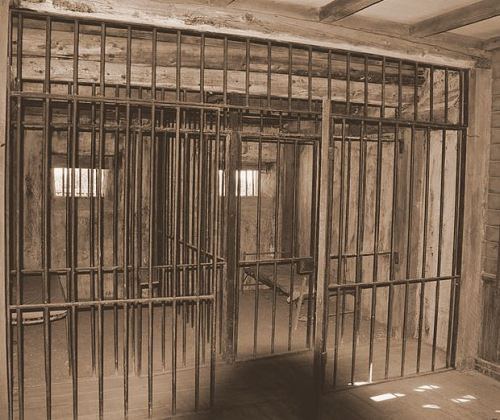 Today, a few snippets from the police and court reports about Dallas people doing things they shouldn’t have been doing. (All clippings are larger when clicked.)

Drunkenness seems to have been the most common reason for arrest in the 1870s and 1880s (and probably still is today). The city “popped it to” a lot of people back in the 1880s.

A “crazy boy” from Collin County eluded lawmen by running off into the Cedars (back when the area we still call “The Cedars” was actually full of cedar trees).

A 14-year-old vagrant was given the scared-straight treatment. (Click for larger image.) 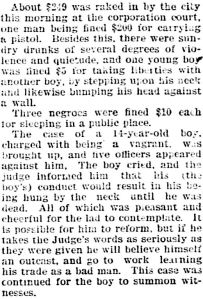 But the real jackpot for the city looks like it might have been in ferreting out adulterers and violators of the Sunday Law (which in the 1880s usually meant selling alcohol on a Sunday, although it was a violation to operate any business or place of amusement on a Sunday).

In the adultery case below — in which the cheating couple was actually living together outside the bounds of legally-sanctioned wedlock — both parties were fined: the woman’s fine was a surprisingly high $100 (in today’s money about $2,500!), but the man’s fine was — let me find a chair — an unbelievably exorbitant $500 (equivalent today to over $12,000!!). And those who pooh-poohed the Sunday Law took an equally incredible hit. Sunday Law scofflaws such as Mr. R. F. Eisenlohr (who ran a respected market and pharmacy) (and who was the father of noted artist E. G. Eisenlohr) were punished with more than slaps on the wrists — in 1880, they were getting “popped” to the tune of five hundred bucks. (These fines seem excessive. Perhaps because they’re cases brought by the state rather than the city or county? I know that at this time the state was hell-bent on enforcing the Sunday Law because, basically, it was being flagrantly disregarded everywhere, so I’m wondering if a fine this steep was meant to send a message to others. But the adultery fine still seems outrageously high.)

And sometimes crime beat reporters (and enterprising undertakers) have something of a slow day and can just kick back and ponder.

Top photo is from Flickr — as I recall, it is not a Texas jail — it might be one in Missouri. As I understand it, the 19th-century Dallas cell most drunks and vagrants would have been thrown into was nowhere near as luxurious as the one seen in this photo. More on that to come.

Interested in what those court fines of yesteryear would be equivalent to in today’s money? Check out the handy-dandy Inflation Calculator, here.