Bonne and Clyde were famous for being from West Dallas, but each actually spent a good amount of time in East Dallas. Working. Earning an honest living. Bonnie worked as a waitress, and Clyde worked in a mirror and glass company. Both worked in establishments on Swiss Avenue, though probably at different times. They hadn’t met yet, but it’s interesting to know they worked at businesses only a few blocks apart: Hartgraves Cafe was at 3308 Swiss, and United Mirror and Glass was at 2614 Swiss. Both buildings are still standing.

The Hartgraves Cafe (the name of which is always misspelled in historical accounts as Hargrave’s Cafe — even by Bonnie and Clyde enthusiasts) was in a curved building at the corner of Swiss and College (it is now at the corner of Swiss and Hall). 50-something-year-old Mrs. Alcie Hartgraves (her first name usually appeared in directories as “Elsie,” sometimes as “Alice”) opened the restaurant a few months after her husband, Ben, had died in 1923. It lasted until late 1930 or early 1931. (All clippings and photos are larger when clicked.)

According to Bonnie and Clyde histories, Bonnie worked there as a teenaged waitress with an absent husband, from 1928 to early 1929. According to one woman who worked at the Yates Laundry, just across from the cafe’s back door, Bonnie was a very nice person. Here, in a 1972 oral history, Rose Myers — who worked at the Yates Laundry for 25 years — remembers Bonnie from those days at Mrs. Hartgraves’ cafe:

From the book Reminiscences

The laundry is long gone, but here’s what the back side of the building Bonnie worked in looks like today. 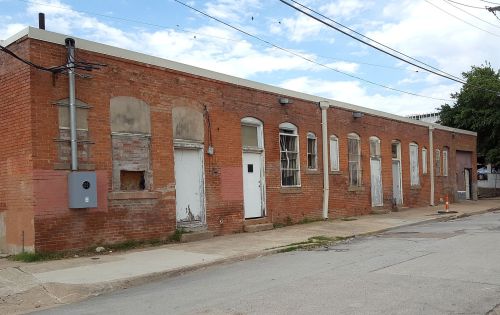 And here’s a Coca-Cola ghost sign, painted on the end of the building that faces Hall. 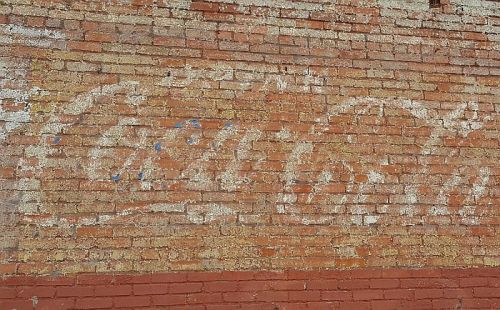 The Bonnie Parker connection is about the only reason people know about this odd little building in Old East Dallas. From looking through Dallas street directories, it appears that this building was built in 1915 or 1916 as a retail strip which, until Mrs. Hartgraves left, usually contained three or four businesses. The question is: why was it shaped like that? Many people think it was a streetcar stop, the cars using the circle as a place to turn around, but old maps showing streetcar routes from this period don’t show cars going down this part of Swiss. Below, a detail from a 1919 map, with Swiss and College streets in red. Streetcar tracks on Swiss turn left at Texas and then right on Live Oak, completely bypassing the circle area. (Another handy map of old streetcar routes laid over a present-day Google map can be found here.)

There’s a great view of the area in the 1921 Sanborn map here (with a different angle here). It may just be that the building was built to take advantage of/conform to the odd jog that Swiss Avenue takes in front of it. Here’s an aerial view from the recent past.

Our own teensy and unspectacular Royal Crescent! (You know what they say — “Everything’s bigger in Bath….”)

But what about Clyde? Clyde worked at a mirror and glass company four-tenths of a mile west. Here’s an ad from 1928 (the same year Bonnie was working at Hartgraves).

Charles “Chili” Blatney worked with Clyde at United Glass and Mirror. In the Dallas Morning News article “He Helps Dallas to See Itself” by David Hawkins (DMN, March 17, 1970), Hawkins wrote: “Blatney remembers him as the friend he was: The little guy who always wore a hat and who would jerk it off and beat the floor with it in merriment when a good joke was told. […] ‘I guess I was surprised to see him turn real bad,’ [said Blatney].”

So, yeah, East Dallas was the stomping grounds of Bonnie and Clyde, back when they were living paycheck-to-paycheck and before they had begun their short-lived life of crime.

Photos of the Swiss Circle building taken by me when I stumbled across it yesterday. I knew what it was when I saw it, but I didn’t really know much about it, other than the Bonnie connection. The building is currently vacant, currently for lease, and currently a weird shade of green. It’s a great space and a cool building. The back side is FANTASTIC!

The surname of the property owner (or property manager) is rather unbelievably … Dunaway.

The passage quoting Rose Myers, who worked at the Yates Laundry, is from the book Reminiscences: A Glimpse of Old East Dallas.

A discussion of this building can be found on the Phorum discussion board, here.

Other Flashback Dallas  posts on Bonnie and Clyde can be found here.