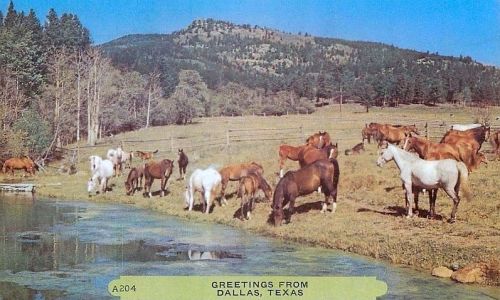 Somehow Anna Belle and her family found the Cotton Bowl. 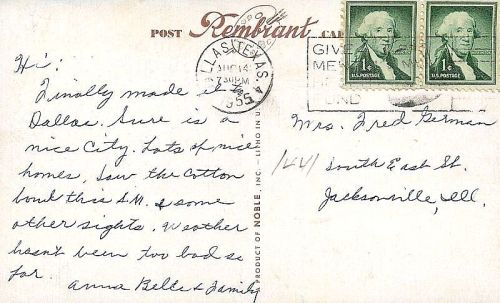 UPDATE: A person commenting on Facebook says that he thinks this shows “Cedar Mountain, near where Joe Pool Lake was built” — an area which actually is within the Dallas city limits. I’m not familiar with that area. Does this postcard show this view? Read about the Cedar Mountain Preserve here; and about Joe Pool Lake here. Check out a map that shows the City of Dallas boundary, here.

Read about Cedar Mountain (“…that wooded white rock ridge that runs from Eagle Ford to Cedar Hill…”) in the Dallas Morning News article “Bear Slapped Him But He Survived” by Kenneth Foree (Sept. 1, 1948).

Apologies, Cedar Mountain and Rembrant (sic) Post Card Company, if I have made unfounded sarcastic comments.

UPDATE TO THE UPDATE: I have to admit, nothing I’ve posted before has stirred up quite so much controversy. This post has been shared quite a bit, and I’ve dipped into Facebook pages where members are discussing this idyllic photo. Half swear up and down there’s no way this could be anywhere near Dallas, and the other half are pretty certain it’s in the Cedar Hill area.

The  more I look into it, the  more it seems possible that this IS in the Cedar Hill area (aka “The Hill Country of the Metroplex”). The highest point in North Texas is just a stone’s throw from Dallas. According to the Wikipedia entry, it “stands at an elevation of about 800 feet (240 m) above sea level — the highest point in a straight line from the Red River at the Texas-Oklahoma border to the Gulf Coast.”

The Old Penn Farmstead was a working family farm/ranch from the 1850s until the 1970s (remaining in the Penn family the entire time). Photos show that the fence construction on the Penn property is the same as that seen behind the horsies in the postcard. The photo may have been taken on Penn land or other land in the same area. There were several large-ish farms and ranches nearby, several of which had horses. There were even a couple of “retreats” operating in the area in the late-1940s and ’50s (notably, the 520-acre retreat sponsored by the Dallas Baptist Association).

Watch a short Texas Parks & Wildlife video about Cedar Hill State Park here; the Penn Farmstead is located here and is seen in the video.

Here’s a 1985 article about the 11,000 nearby acres which would soon be inundated in the construction of Joe Pool Lake. (Click article to see larger image.)

UPDATE TO THE UPDATE OF THE UPDATE: It appears that the Rembrant Post Card people will tell you whatever you want to believe! The same image has been found without “Dallas” but with “Colorado” on it (see link in comments section). Horrors! So, anyway. After all that, my original sarcastic tone stands. Always trust your inner cynic! At least I learned about Cedar Hill!

UPDATE, ETC.: And now this saga has been taken on by intrepid Dallas Morning News reporter Charlie Scudder! Read his coverage, here.

UPDATES, INCORPORATED: And, somehow, this story ended up in the pages of the actual paper edition of The Dallas Morning News. Lordy. 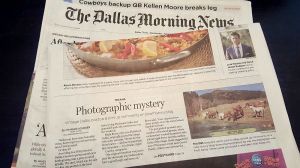