Shopping at Sears in Casa View

I’m not in the Casa View area very often, but I was driving through last week and noted that a lot of the elements of the shopping center looked as if they were original to the buildings — specifically the little metal doo-dads along the top of the canopies over the sidewalks. I came across the photo above tonight and was happy to see those little doo-dads back when they were relatively new. The shopping center is a little confusing to me, but I think this is what that building pictured above looks like these days. (Why, why, WHY did someone think this “remodel” of the buildings was a good idea! Slapping on a new facade and removing the decorative metal doo-dads was an unfortunate decision.)

The Sears store pictured above is actually the second Sears in Casa View. The first store opened in October, 1956  at 2211 Gus Thomasson (here’s what the location of the first store looks like now — metalwork still there but that cool brick exterior has been painted over). It was Dallas’ fifth Sears store and opened in the still-under-development Casa View neighborhood. It wasn’t a full department store — its merchandise was limited mostly to appliances and automotive products. It was also a place to pick up catalog orders. (Click photos and ads to see larger images.)

Apparently the store was so successful that in March, 1964, a brand new Sears opened up in a five-times-larger location (2310 Gus Thomasson) across the street — the photo at the top of this post was probably taken when it was in its first months.

Its interior — seen below in all its pristine, blinding whiteness — is fantastic. (Is that woman in the apron serving cookies she’s just baked?) 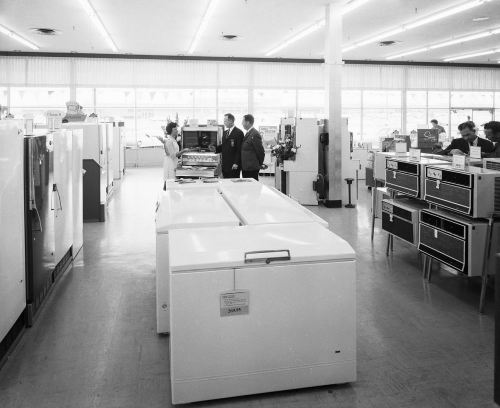 The reason I was confused by the shopping area is that it was built in phases. The first part was built in 1953 and was originally known as Casa View Hills Shopping Center. (Click the ad below to see a larger image.)

But then the ownership changed hands in early 1955, and it was renamed Casa View *Village* and reopened in April under the new name.

The Casa View Shopping Center (I don’t know what its official name is these days, but I’m going with this) is looking a little ragged these days, but it still has a quirky charm, and I’m happy to see it still chugging along after 60 years.

Other businesses once located in these shopping centers can be found in the post “Bryan Adams High School: Yearbook Ads from 1961 and 1962,” here.

17 Comments to “Shopping at Sears in Casa View”