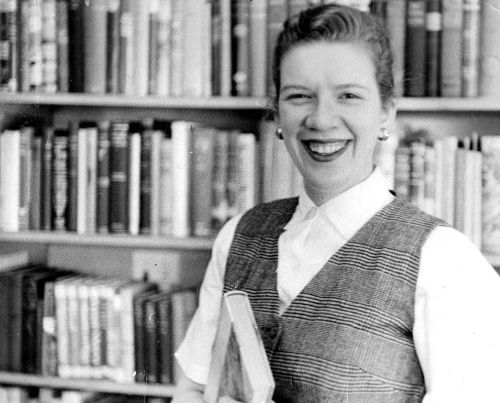 Mimi Aldredge McKnight (née Mildred Payne) died this week. She was an important person in the story of my family — she and her then-husband, Sawnie Aldredge, Jr. owned The Aldredge Book Store on McKinney Avenue, where my parents met and worked for many years and which, for my brother and me, became pretty much a second home. When Sawnie died, Mimi continued to run the store and kept my father, Dick Bosse, on as manager. My father ended up owning the store, and when he died, he had worked at The Aldredge Book Store for almost 45 years. Even when Mimi’s involvement with the store was minimal, she still kept in touch, and she and my father were always on very friendly terms.

I knew Mimi mostly when I was a child, and my memories of her are happy ones. I remember her laugh and her voice most of all. She always seemed like a lovely, friendly woman, and my parents were both very fond of her. 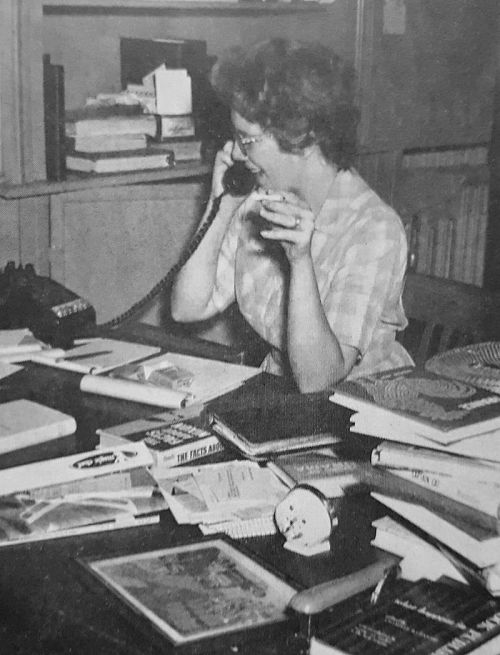 I ran into Mimi a few times as an adult. We’d usually just exchange quick pleasantries and ask how various family members were — but I always hoped I’d have the chance to sit down and have a long conversation with her someday. Sadly, that didn’t happen, but I’m so happy that my brother, Erik, and I have reconnected with her children, Amy and Trip Aldredge, and that we’re all friends. The four of us share nostalgic childhood memories of each other’s parents and of that old creaking house on McKinney — a house so crammed with books that the medical section had to be shelved in the bathroom. I can’t imagine a better childhood that one spent growing up in a bookstore.

Goodbye, Mimi — I’m so glad you were a part of my family’s life.

In one of those wonderful unexpected discoveries I’ve made while looking for something completely unrelated, I stumbled across this photo of little Mildred Payne as a baby and was happier about it than I might have expected. (Click photo to see a larger image.)

It wasn’t until I was an adult that I realized Mimi had been a real-life, honest-to-god debutante (probably the only debutante I’ve ever met) and that her mother was a member of Dallas’ famed Volk retail family. She grew up in a very nice house, built by her father, Robert I. Payne, in the Perry Heights area of Oak Lawn. If you’re famiiar with Oak Lawn, you’ve probably seen the plantation-like house at 4524 Rawlins (at Hawthorne), designed by architect Ralph Bryan in 1936. (See the house today on Google Street View, here.)

Sawnie Aldredge, Jr. (son of a Dallas mayor) opened The Aldredge Book Store in 1947 at 2800 McKinney Avenue (at Worthington) in an old house built in the 1880s or 1890s (this was several years before Sawnie and Mimi married). The picture below is from around 1960. This was before my time, but I seem to remember it looking less overgrown and less … shabby! It was much larger than it appears in this photo. Below the photo, the store’s early logo. (I’m not sure when the house was torn down — maybe in the ’80s? The lot was vacant for quite some time, as I reall. The block is painfully unrecognizable today. Today it looks like this.)

A few years ago, when my brother and I were closing the store, I came across a guestbook from the first year of business and was happy to see that on Dec. 15, 1947, a 19-year-old Mimi Payne visited the store with her mother, Mrs. R. I. Payne. Little did she know that seven years later she’d be married to the proprietor of the store and — for a while — living in that house, battling for personal space amongst all those damn books!

The photo below is one I really love — it was taken in 1958 at the Sale Street Fair, an annual antique street market which ran at the same time as the Neiman-Marcus Fortnight (in 1958 Neiman’s was celebrating Britain). This shows Mimi manning the bookstore booth. My mother told me that she and Mimi (and probably everyone else there) passed the time sitting on the curb, sipping cocktails supplied by friendly neighborhood antique dealers. Sounds great! 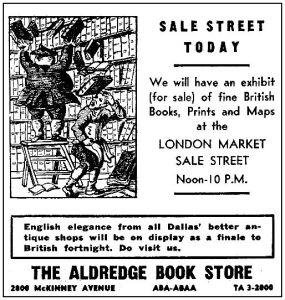 In 1975, another chapter of Mimi’s life opened when she married esteemed SMU law professor Joe McKnight, to whom she had been married for 40 years at the time of his death in 2015. One interesting highlight was that Joe and Mimi — through their friendship with international bestselling author Alexander McCall Smith (The No. 1 Ladies Detective Agency, etc.) — were featured as characters in his Sunday Philosophy Club/Isabel Dalhousie series. He talked about putting them in one of his novels in a 2006 interview:

Isabel’s mother was American, and she has a cousin of her mother in Dallas, [who is based on] a real person… I was a visiting professor at Southern Methodist University and I’ve got very good friends there, a wonderful couple called Joe and Mimi McKnight, who I’ve made the cousin of Isabel in this book. I have Joe and Mimi coming to Edinburgh, and Mimi plays a large part in the story. So, I’m writing a real person into the story, which is great fun.

A couple of the photos above come from a profile of The Aldredge Book Store in a magazine called Texas Parade (Feb. 1961): “100,000 Books … Old and New” by Joe Swan. See the full article and photos in a PDF, here. 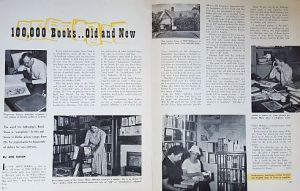 D Magazine wrote about Joe and Mimi McKnight and their connection to Scottish author Alexander McCall Smith in the June 2007 article “Muse, Thy Name is McKnight,” here. The photo below (by Elizabeth Lavin) is from that article. 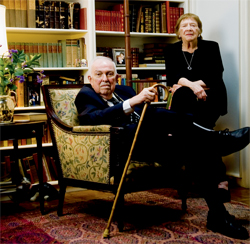 Other Flashback Dallas posts concerning The Aldredge Book Store can be found here.

Most photos larger when clicked.