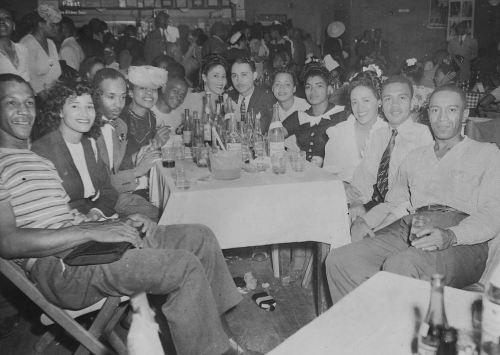 The photo above was taken at the Rose Ballroom at 1710 Hall Street (a few steps off Ross Avenue) in August, 1942. 1710 Hall was the home to a string of very popular black nightclubs: the Rose Ballroom (1942-1943), the Rose Room (1943-1951), the Empire Room (1951-1969) (not to be confused with the nightclub of the same name in the Statler Hilton), and the Ascot Room (1969-1975). There seems to have been some overlap of owners and/or managers and/or booking agents, but they all appear to have been very popular “joints” (as described by Freddie King’s daughter), where both big-name touring musicians as well as popular local acts played. Icons T-Bone Walker and Ray Charles were regulars (there are stories of Ray Charles sleeping on the Empire Room’s stage during the time he was living in Dallas in the ’50s). Everybody seems to have played there. Below, a quote from Wanda King, talking about her father, blues legend Freddie King — from the book Texas Blues: The Rise of a Contemporary Sound by Alan Govenar (all clippings and photos are larger when clicked): 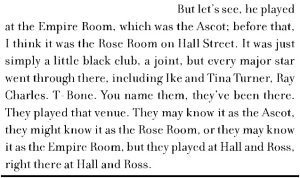 Some of the acts scheduled to appear in early 1946 at the Rose Room were Erskine Hawkins, Louis Armstrong, Lionel Hampton, Buddy Johnson, and Andy Kirk. …Wow.

In the days of segregation, when Dallas police threatened to shut the club down if the owner allowed white patrons to mix with black patrons, the club scheduled “white only” nights where Caucasian audiences could see their favorite non-Caucasian performers. (Before these special club nights, which seem to have started in 1945, a revue would be taken “on the road” — over to the Majestic Theatre on Elm Street — to perform live onstage.)

The photo up there at the top showed the audience — here’s the stage (1946 photo of the E F Band by Marion Butts, from the Marion Butts Collection, Dallas Pubic Library): 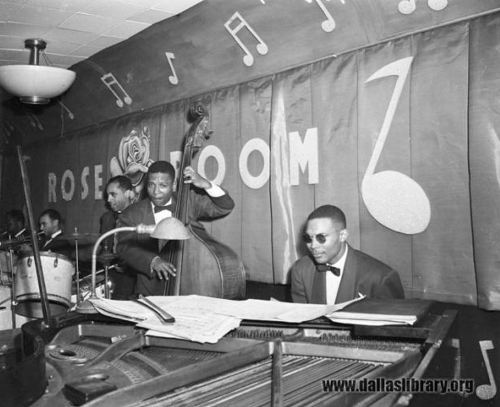 And here’s what the stage looked like when the club became the Empire Room (onstage is Joe Johnson in a 1954 photo by R. C. Hickman, taken from a great article about Hickman in Texas Highways, here):

One thing that probably helped set the Rose Room/Empire Room apart from a lot of the other clubs in town at this time was the man who booked the shows — and who booked acts all over the area: John Henry Branch. The guy knew everyone. Here he is in an ad from 1947: 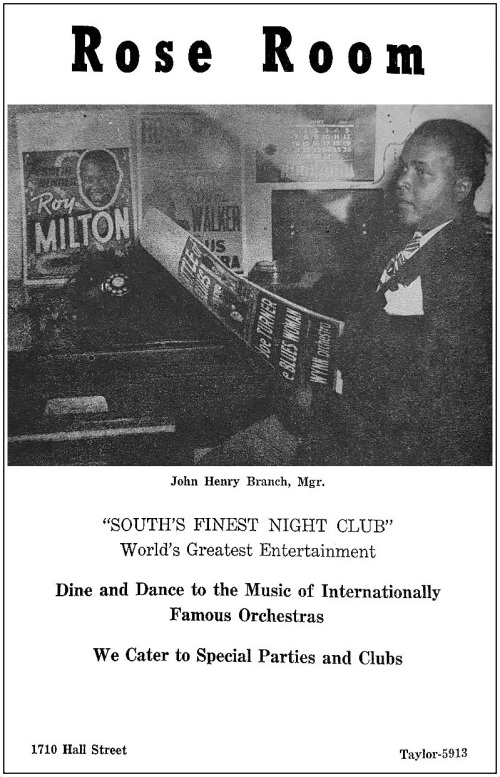 Aside from booking acts and musicians for black clubs, he also booked acts for white clubs — including Jack Ruby’s Carousel and Vegas clubs. In fact, Branch chatted with Ruby at the Empire Room the night before Ruby shot Oswald — Ruby had come in to check on a piano player Branch was booking for a gig at the Vegas Club in Oak Lawn. Branch supplied testimony to the Warren Report, and while it’s not all that riveting (because there wasn’t that much to tell), it’s still interesting to hear how Branch describes his own club and Ruby’s personality (“You can’t never tell about him — he’s a weird person.”) — you can read his testimony here.

I have to admit, I’d never heard of the Rose Room or the Empire Room before I saw the photo at the top of this post. I really missed out. So much fantastic music! And I missed it. It’s just another reminder that Dallas has an incredible music history.

What’s at 1710 Hall these days? A vacant lot — soon to be developed, no doubt. Ross Avenue ain’t what it used to be….

UPDATE: After many fruitless attempts to find a photo of the exterior of this building, I stumbled across it in a 1973 filmed report from KERA, recently uploaded by the G. William Jones Film and Video Collection at SMU. Below is a screenshot showing the Ascot Room a couple of years before it finally closed, looking a little worse for wear. The 8-minute film (which you can watch here) shows tons of locations in the Black neighborhoods of South Dallas (along Forest Avenue/MLK Blvd.) and “North Dallas” (along Hall Street) — the Ascot Room can be seen briefly at the 1:46 mark. (More on this film can be found in the Flashback Dallas post “Black Dallas — 1973.”)

Top photo from the George W. Cook Dallas/Texas Image Collection, DeGolyer Library, Central University Libraries, Southern Methodist University; more info on this photo is here. Someone has written this on the photo: “Aug. 42, Dallas, Rose Room” — in August, 1942 the club was known as the Rose Ballroom; it changed its name to the Rose Room in early 1943.

1973 screenshot is from a 1973 film (my guess is that it was broadcast on Channel 13’s “Newsroom”) from the KERA Collection, G. William Jones Film and Video Collection, Hamon Arts Library, Southern Methodist University.

Wanda King quote is from the book Texas Blues: The Rise of a Contemporary Sound by Alan Govenar (College Station: Texas A & M University Press, 2008).

Rose Room ad featuring John Henry Branch is from the 1947-48 Dallas Negro City Directory (with thanks to Pat Lawrence!).

More about the hopping Hall Street area can be found in the Flashback Dallas post “Life on Hall Street — 1947,” here.