The G. B. Dealey Library and Reading Room at the Hall of State

A quiet place to read or study… (click for larger image)

I spent time this week walking around the G. B. Dealey Library and Reading Room at the Hall of State in Fair Park. It is part of the Dallas Historical Society, and it is a quiet, high-ceilinged, airy-but-cozy Western-themed oasis filled with lots of warm wood and featuring two large murals by legendary El Paso artist Tom Lea. If you haven’t seen it, I highly encourage you to go take a look.

What we now call the Hall of State was the architectural jewel in the crown of the Art Deco splendor created throughout Fair Park for the Texas Centennial Exposition in 1936. The room now housing the Dealey Library was originally the West Texas Room — one of four geographically-specific rooms in the Hall of State. The two Tom Lea murals (one depicting a cowboy, the other, pioneers) are on opposite walls (walls finished with an adobe-like plaster, decorated with famous Texas brands, in relief). One wall is covered with cowhide. There are painted ceramic tiles set into both the walls and the floor (the ones on the floor decorated with images of cactus are great!). There is a wood sculpture of a cowboy, carved by Dallas artist Dorothy Austin, who was only 25 years old when the Centennial opened. And … well — like everything in the Hall of State — everywhere you look you see incredible attention to detail. Every fixture, grating, knob … everything is absolutely wonderful.

In 1989, after a two-and-a-half-year renovation, the West Texas Room became the home of the G. B. Dealey Library (named in honor of the former publisher of The Dallas Morning News). The project was headed by architect Downing Thomas who took great care in choosing the Arts and Crafts-style furniture (the chairs, tables, and bookcases were handmade by Thomas Moser in Portland, Maine, the chairs emblazoned with bronze Texas stars and upholstered in tanned leather), reading lamps with mica shades (made by Boyd Lighting of San Francisco), and a woven rug by Sally Vowell of Fort Worth (I don’t recall seeing a rug, but there’s a lot to take in and I might have missed it). I really love this room.

When the library opened in November, 1989, the first guest through the doors was Tom Lea who had been shocked to learn that his then-53-year-old murals were still in place. And they’re still there, 81 years after Lea created them. And you should go see them.

The library and reading room is open Tuesday-Sunday, same hours as the Hall of State. If you are interested in researching materials from the collection of the Dallas Historical Society, you are encouraged to contact the staff in advance of your visit and make an appointment; though the room is open to the public, research hours are limited. More about this and the hours of operation can be found here.

Below, one of the Tom Lea Murals can be (partially) seen above the cowhide wall-covering and above Dorothy Austin’s cowboy sculpture. (Click photo to see a larger image.) That light fixture is fantastic! (See the full Tom Lea mural here.)

Here’s the view from the back corner looking toward the entrance, over which can be seen Lea’s second mural.

In the photo at the very top, you can see the floor, which is studded with all sorts of cactus-themed tiles. Here are examples of four of them.

My absolute favorite of the cactus tiles is this one, in a very Japanese-like rendering.

That’s what the room looks like today. Here are a few photos of the West Texas Room under construction in 1936 (photos from the Dallas Historical Society’s Centennial Visual Collection). The first one shows Dorothy Austin standing below the Tom Lea mural, about where her cowboy statue would be placed. Those ceilings are pretty high.

And here’s the statue. (See Austin’s statue close up, here, in a 2014 photo by Carol M. Highsmith, from the Library of Congress.)

And here is a look into the room from the entrance, showing a construction crew at work.

Below are 28-year-old Tom Lea’s thoughts on being informed of his important commission, from the El Paso Herald Post, March 24, 1936.  (Click to see larger image.)

It seems strange that Lea was only in the preliminary-drawing stage of the murals’ creation in March — the Centennial was scheduled to open in June, less than three months away. (It’s worth noting that even though the Centennial — which ran for almost six months — opened in June, the Hall of State did not open to the public until September, three months behind schedule and the only Exposition building that did not meet its deadline. It was finally dedicated on September 5, 1936, the 100th anniversary of Sam Houston’s election as the first President of Texas.) 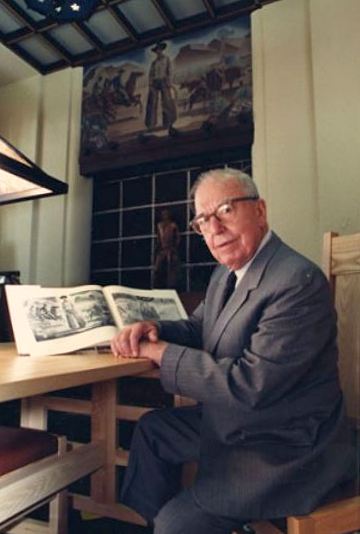 To read more details on the 1989 opening of the G. B. Library and the renovation of the West Texas Room, please check out these articles from The Dallas Morning News archives:

Photos of the Dealey Library and Hall of State door (below) are by me.

Photos of the West Texas Room from 1936 are from the collection of the Dallas Historical Society. You can search through low-res thumbnails of some of the images from their very large collection here.

As mentioned above, if you plan a trip to the Dealey Library in order to inspect or research items from the DHS collection, these materials must be requested in advance and an appointment must be scheduled (info here).

More on Tom Lea (1907-2001) can be found at the Tom Lea Institute website, here (with specific information on the Hall of State murals here); a profusely illustrated blog post with an emphasis on his time as a WWII artist-correspondent can be found here.

Obituary for Dorothy Austin Webberley (1911-2001) can be found on the Dallas Morning News site, here; family obituary is here.

Detailed info on the architecture and design of the Hall of State can be found in a Dallas Historical Society PDF, here. The Wikipedia entry is here (someone please correct the erroneous info that the Dealey Library is in the “East” Texas room!), and the always informative Watermelon Kid site has information on the East Texas and West Texas rooms here.

A series of photos of Fair Park, taken in 2014 by Carol M. Highsmith, can be found at the Library of Congress website, here. Her photo of the Hall of State is below. 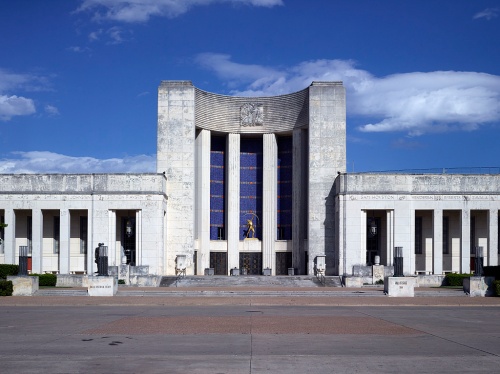 And, lastly,  a photo I took showing one of my favorite elements of a building packed with aesthetically pleasing details (seriously, everywhere you look): one of the doors of the main entrance to the Hall of State, designed by Houston architect Donald Barthelme, honoring Texas industry (ranching, timber, oil, agriculture, etc.). That sawmill blade gets me every time. And the aerial perspective of oil coming up through a derrick (middle right) is pretty cool, too. (Click to see a larger, more exciting image!) 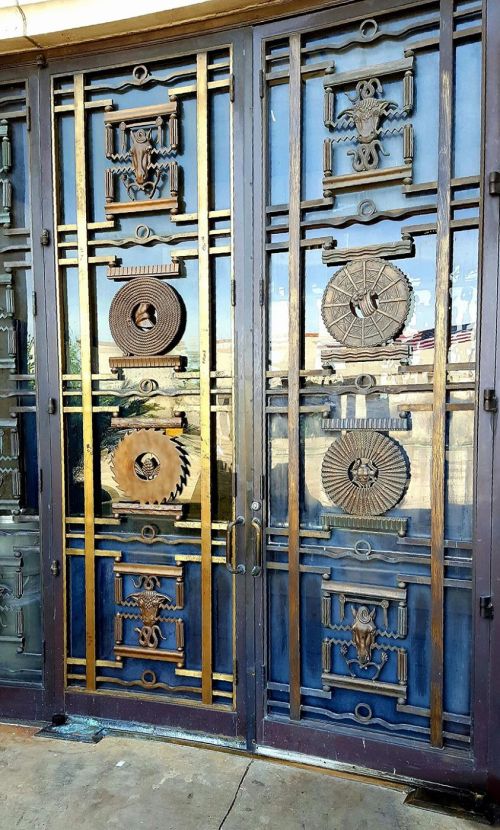 4 Comments to “The G. B. Dealey Library and Reading Room at the Hall of State”