Until last week, I don’t think I’d ever heard the 1969 song “The Back Side of Dallas,” sung by Jeannie C. Riley, who had had the blockbuster hit “Harper Valley PTA” the previous year. How have I never heard this? I was going to post it last week until I realized that it would be better to wait until today, because of this line from the song: “Meet me in Dallas on June the 23rd, his letter read.” And here we are, June 23rd.

The song, written by Jerry Foster and Bill Rice, was released in October, 1969. It wasn’t the huge, crossover, multi-award-winning monster hit that “Harper Valley PTA” was, but it did earn Jeannie another Grammy nomination (she lost to Tammy Wynette’s “Stand By Your Man” — if you’re going to lose, that’s a pretty great performance to lose to!).

Like “Harper Valley PTA,” it was one of several songs of the era which brought country music into the somewhat seedy realm of 1960s American culture. “The Back Side of Dallas” is about a small-town girl who finds herself a lonesome “working girl” in Dallas, chain-smoking king-size cigarettes, drinking in dingy bars, and popping pills. This ain’t no Kitty Wells song, y’all. (I’d love to hear Miranda Lambert — who also has an incredible country voice — cover this.) 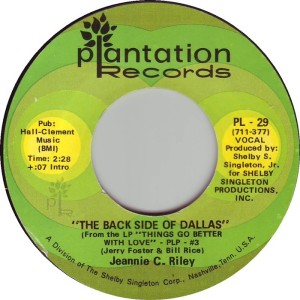 Jeannie C. Riley — born in Anson, Texas in 1945 — was one of the first certifiable sex symbols in country music, always gorgeous, outfitted in miniskirts and go-go boots, with sky-high hair teased to a fare-thee-well. AND she had an absolutely fantastic voice. Below is video of a 24-year-old Jeannie C. Riley singing “Back Side of Dallas” on Del Reeves’ Country Carnival in 1969 (Del Reeves had some great songs in the ’60s, but his TV persona was a little too Dean Martin-wannabe for my taste … and … oh dear … that set!):

I prefer the studio version, below. I’ve listened to this song dozens of times now, and I haven’t gotten tired of it yet!

And here’s Jeannie singing it in 2011, still sounding great! (Her thick Texas accent is the absolute best, and her laugh is fantastic.) She talks about the song a bit at the beginning with Jerry Foster, one of the writers of the song — the song itself starts at about the 3:10 mark.

And, to round out this “June the 23rd” post, a few photos of Jeannie C. — surely one of the most photogenic faces and bad-ass vocalists in the history of country music. As my father used to say, “hot damn.”

Most, if not all, photos of JCR from Pinterest.

A biography of Jeannie C. Riley is here.

“Harper Valley PTA” — you know you want to hear it. This is a great live version she did on, I think, the Wilburn Brothers Show, with Harold Morrison on dobro.

Not that anyone’s going to confuse the two songs, but this song has nothing to do with the 1915 song of the same name by Adolphus Hotel orchestra leader Jack Gardner (which you can read about here).