I stopped by Sigel’s liquor store the other day (as one does…) and saw this legendary Sigel’s sign, recently installed in its new home in the parking lot of the Sigel’s store on Greenville Avenue, between Lovers Lane and Southwestern Boulevard, across from the Old Town Shopping Center. I love this neon sign. (See a very large image of it here.)

The sign’s design can be traced back to Dallas artist Marvin M. Sigel (whose great-uncle Harry Sigel founded the business in 1905) — this Fabulous Fifties design was created around 1953 specifically for the then-new store at 5636 Lemmon Avenue (at Inwood). When that store closed in 2009, the sign was refurbished and moved up to the company’s Addison location until that store fell victim to the company’s bankruptcy and was closed. Here’s a video of the fabulous sign when it was in Addison, with close-ups of its flashing neon and dancing bubbles:

Marvin Meyer Sigel was born in Poland in 1932 and settled in Dallas in 1937 with his immigrant parents, both of whom had been doctors in Poland (his mother a dentist, his father an M.D.), although only his father continued to practice medicine in the United States. He lived in the vibrant Jewish enclave of South Dallas and went to Forest Avenue High School where he seems to have been a popular kid, interested in art, drumming, and ROTC. Below, a photo from the 1949 yearbook with the caption “Marvin ‘Hot Drums’ Sigel plays with the Swing Band.” 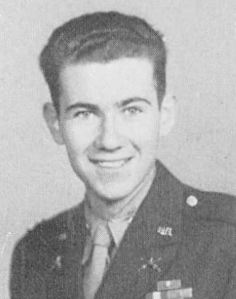 And his 1953 senior photo from the University of Texas:

After studying art at both SMU (under Ed Bearden and DeForrest Judd) and the University of Texas and receiving his B.F.A. from UT in 1953, Sigel served a stint in the Eighth Army in Korea. Back in Dallas, he was remarkably active in the local art community — for decades — as both a fine artist and as an art instructor. He also worked for a while at Peter Wolf Associates, in advertising (on projects for companies like Braniff), and he even did a lot of the tedious paste-up work for Sigel’s ads (back when every picture of a bottle of wine or spirits had to be cut out individually and pasted into one of those huge ads!). But his passion was art, and at the same time he had those regular-paycheck gigs, he also managed to maintain a furious pace of painting new pieces to exhibit at a dizzying number of art shows. Below is an example of one of his watercolors, from 1957 (which was recently offered at auction by David Dike Fine Art). The title? “Cocktail Abstraction” — appropriate subject matter for a member of the Sigel family! 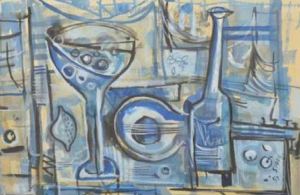 When the Sigel’s Liquor store No. 7 opened at Lemmon & Inwood, it was suggested by family members that, hey, we have an artist in the family, let’s get Marvin to design a sign for us. According to Marvin, his cousin Sidney Sigel, who ran the company, probably just wanted a “rectangular sign with block letters,” but other family members wanted something newer and more exciting — something modern that would jump out of a sea of boring rectangular signs with block letters and draw attention. And it certainly did just that. If, as reports have it, that dazzling neon sign was designed in 1953, Marvin Sigel was only 21 years old!

When news broke 56 years later, in 2009, that the Lemmon & Inwood store was closing, there was a concerned uproar from the public about what would happen to the sign. Mr. Sigel was a bit taken aback by how much the people of Dallas had grown to love that sign and considered it a city landmark. Marvin Sigel, then 77 years old, said in a 2009 Dallas Morning News interview, “It was clever, but I figured it would be replaced by something more clever in a half-dozen years.”

The sign was built by the venerable Dallas firm of J. F. Zimmerman & Sons (est. 1901) who for generations had installed decorative neon elements all around town and had built innumerable lighted signs for companies big and small — their work could be seen on the Mercantile Building’s wonderful tower, on the exterior of the downtown Titche’s store on Main Street, and in the instantly recognizable signs for places as varied as the Cotton Bowl, Big Town, and, presumably, various other Sigel’s stores around the city.

The sign which was moved from Store No. 7 at Lemmon & Inwood to Addison had on its pole a small plaque (seen here) which said:

This Non-Conforming Sign designed by Marvin Sigel was built in the early 1950s. It was moved from Dallas, TX at Lemmon Ave. & Inwood. After being granted a variance it was refurbished to Code and installed here in June of 2009. Sign refurbished and installed by Starlite Sign of Denton, TX.

Interestingly, the plaque on the new location of the sign has a slightly different text:

It appears that this is a different Sigel’s sign. In 1965, there were two Sigel’s stores on Lovers Lane: Store No. 8 was along the Miracle Mile on West Lovers Lane, near what is now the Dallas North Tollway, and Store No. 12 was on East Lovers Lane at Greenville (then near Louanns nightclub).

In an April 22, 2009 Dallas Morning News article by Jeffrey Weiss (“The Story Behind That Sigel’s Sign”), is this quote from Mr. Sigel’s son, David S. Z. Sigel, about the original sign at Lemmon & Inwood, with mention of another similar sign: “He created the designs for this sign, as well as a similar but smaller sign which stood outside the Lovers Lane store (where Central Market now stands) for many years.” Here’s a map from a November, 1964 grand opening ad for the new store at 5744 E. Lovers Lane:

So is the sign currently standing in the parking lot of the Sigel’s Fine Wines & Great Spirits at 5757 Greenville Avenue the sign which originally stood only a short four-tenths of a mile away? I hope so! And if it is, welcome back to the neighborhood, cool sign!

Whichever sign this is, it is one of the greatest neon designs Dallas has ever had, and I’m so happy it’s survived for over a half-century, through phenomenal city growth, physical displacement, and even company bankruptcy.

Thanks, Marvin, for designing this wonderful sign! And thanks, Starlite Sign of Denton, for the beautiful refurbishing!

YouTube video by Andrew F. Wood, shot in Addison in 2013.

Sources for other images as noted.

The Zimmerman & Sons nameplate can be seen on the original Lemmon & Inwood sign here (click to enlarge), posted on Flickr by Tim Anderson (a detail of his photo can be seen below) (there is another Zimmerman nameplate posted in the comments on that Flickr page); what appears to be a Zimmerman plate is on the side of the sign at the Greenville Avenue location facing the store’s entrance, not on the side seen in my photo at the top. 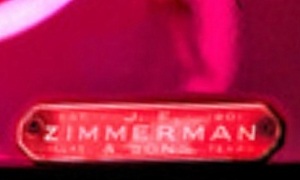 Please check out the Dallas Morning News article in the DMN archives titled “Sigel’s Sign Designer Surprised by Its Fame — Project for Family’s Liquor Store Wasn’t a Hit with Boss, He Recalls” by Jeffrey Weiss (April 28, 2009) in which Marvin Sigel discusses his famous sign.

If anyone can verify that this sign is, in fact, the sign from Store No. 12 (Lovers & Greenville), please let me know!