This is a really great photo of the still-missed Esquire Theater in Oak Lawn. Here we see it in 1969, showing the X-rated film Midnight Cowboy, which went on to win several Academy Awards, including Best Picture (the only X-rated film to receive the Best Picture Oscar), Best Director (John Schlesinger), and Best Adapted Screenplay (by Waldo Salt, based on the novel by James Leo Herlihy).

Midnight Cowboy opened at the Esquire in July, 1969 and ran for several months. One of the featured actors in this American classic is Dallas’ own Brenda Vaccaro (Thomas Jefferson High School Class of 1958, daughter of Mario Vaccaro who owned Mario’s Italian restaurant) — I’ve loved her in everything I’ve ever seen her in. (Here’s one of her scenes from Midnight Cowboy.)

“Whatever you hear about Midnight Cowboy is true!” … “A reeking masterpiece. It will kick you all over town.” … “A nasty but unforgettable screen experience.” 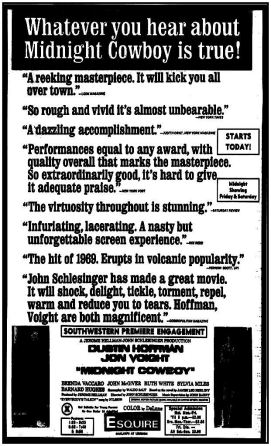 It’s been a while since I’ve seen this movie. I had forgotten how much I liked the opening in which Joe Buck leaves Texas to head to New York. Here it is, overflowing with small-town Texas flavor (filmed in Big Spring). Cameo by an evocative Mrs. Baird’s paper hat.

Photo titled “[‘Midnight Cowboy’ at Esquire Theatre]” is from the Spotlight on North Texas collection, provided by UNT Media Library to The Portal to Texas History; more on this photo can be found here.