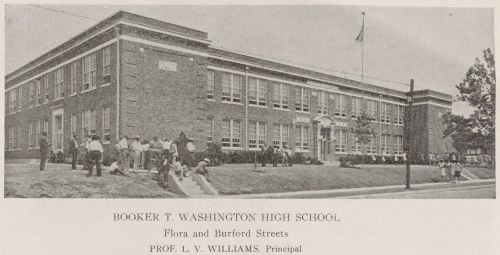 Let’s take a look at six schools for African American children in segregated Dallas in 1930. Three of the schools are still standing.

Below, the N. W. Harllee School (still standing) in Oak Cliff at 1216 E. 8th, at Denley. (The name of the school was misspelled in the caption.) See it today on Google Street View here, and on the same site (then at 8th and Miller, when different buildings housed the 9th Ward Public School) on a 1922 Sanborn map here.

The Phillis Wheatley School is also still standing, in South Dallas at Metropolitan and Meyers. See it on Google Street View here, and on a 1922 Sanborn map here.

The B. F. Darrell School was at 3212 Cochran, at Hall. See the still-empty lot on Google Street View here, and the location on a 1921 Sanborn map here when the site was occupied by Dallas’ first high school for black students, known as the “Colored High School”; when Booker T. Washington opened in the 1920s, this building was renamed B. F. Darrell and became an elementary school; according to Dallas Rediscovered by William L. McDonald, the building was built in 1895 and was demolished in 1973.

The Pacific Avenue School at 1221 Fletcher, near East Grand in the Fair Park area, was about to be left behind when students moved to the Julia C. Frazier School on Spring Ave. the next year. The site is now occupied by the Fannie C. Harris Youth Center and can be seen on Google Street View here. See the buildings on a 1922 Sanborn map here. 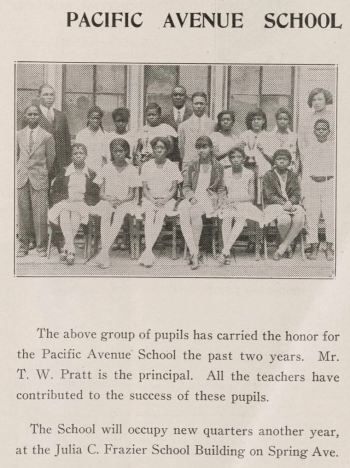 And, lastly, the J. P. Starks School, at 1600 S. Preston, at Gano, near Old City Park. There’s nothing there now, but its general location is on Google Street View here. The school can be seen on a 1921 Sanborn map here when it was the Fred Douglass School (the school’s name was changed after the death of principal J. P. Starks — in 1930 there was another Fred Douglass school in West Dallas at Williams and Pine streets — in fact, I think there have been several schools in Dallas named after Frederick Douglass). 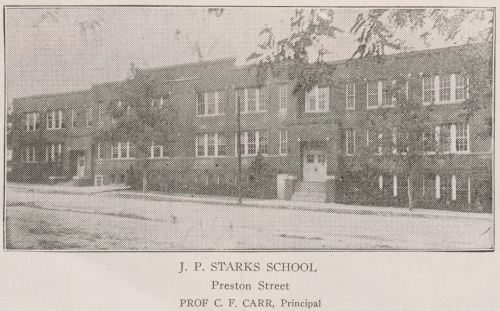 Other schools for black children in Dallas in 1930 (excluding kindergartens) were the following:

Photos from Official Directory: Dallas Negro Churches, Schools and Other Activities; Civic, Business, Fraternal, Social, Etc. compiled by James H. Smith, 1930; from the Tarrant County Black Historical and Genealogical Society, via the Portal to Texas History. This fantastic resource is scanned in its entirety here (the full list of schools, kindergartens, colleges, trade schools, etc. begins on p. 29). I will be posting more from this directory soon.

Photo of the exterior of the Pacific Avenue School is from Education in Dallas, 1874-1966, Ninety-two Years of History by Walter J. E. Schiebel.