“Madame Pratt” in her music studio

I’ve recently posted lots of photos of black schools and black churches which appeared in the Official Directory: Dallas Negro Churches, Schools and Other Activities; Civic, Business, Fraternal, Social, Etc., an absolutely fantastic historical document (which is scanned in its entirety on the Portal to Texas History site here) — now I thought I’d post some of the businesses and people featured in the directory.

First is the woman seen above, Ella Rice Pratt (1893-1966) who was known professionally as “Madame Pratt” and seems to have taught an extremely wide range of musical instruments. According to this 1930 ad, she was “The only woman of her race in Texas who performs successfully upon two instruments at the same time.”  (Most images are larger when clicked.)

Her 1966 obituaries (one of which is here ) list a string of accomplishments, including having studied music at the New England Conservatory in Boston, toured as a concert pianist, trained a 30-piece touring orchestra, and opened what was described as “the first music studio in Dallas where Negro musicians could receive training on all instruments” (Dallas Morning News, Oct. 3, 1966). Not only was she a notable Dallasite, so were members of her family: her father, Charles A. Rice was a principal at Booker T. Washington High School (and is the namesake of Charles Rice Elementary School), her mother, Sally Rice, was the first supervisor of Griggs Park, and her husband, T. W. Pratt was a long-time principal in Dallas schools (at the time of this directory he was the principal of the Pacific Avenue School (he might be seen in this photo which also appeared in the 1930 Negro Directory). The Pratts lived at 3612 Thomas Ave., near Washington, where Madame Pratt also had her studio. (Her headstone in Lincoln Memorial Park has musical notes engraved on it.)

Speaking of music, R. T. Ashford was a prominent businessman (he was one of the founders of the Dallas Negro Chamber of Commerce) who owned R. T. Ashford’s Music Shop, a popular record store at 408 N. Central (at Swiss), just north of Deep Ellum. Before this 1930 directory was issued, Ashford had called his shop “Black Swan Music”(I’m not sure whether this was an “homage” to the Black Swan record label or some sort of partnership). Ashford’s store was apparently very popular and Ashford himself seems to have been taken seriously by record labels whenever he would recommend local talent (he appears to have figured prominently in Blind Lemon Jefferson’s recording career). Ashford moved from Central Avenue to Hall Street in 1931, but he was a Deep Ellum music and business fixture for many, many years. I think the location of Ashford’s record shop (if not the actual store) can be seen in this photo from 1919 (on the street-level floor of the Thorburn Broom & Brush building). (Fun fact, perhaps only to me: Ashford’s Music Shop was next door to a business proprietor named “Simpson.”)

Another entrepreneur was Thad Self, whose main business seems to have been a grocery/general merchandise store on Routh Street south of Colby. He also owned a transfer company, a hotel/boarding house, a barber shop, a cafe, and at least one other general store. Most of his companies were located in buildings on the neighboring lots at 2113 Routh and 2115 Routh, one or both of which he appears to have purchased in 1913 for $100 (about $2,600 in today’s prices). He built a large three-story building on Routh in 1913 (which, according to this 1921 Sanborn map) was built over the Dallas Branch of the Trinity which snaked through downtown and the State-Thomas area — that  basement was probably pretty damp.

Speaking of hotels, one of the most prominent hotels in the era when blacks were not allowed to stay in “white” hotels by law was the Powell Hotel at 3115 State Street (between Ellis and Hugo), owned by D. H. Powell and his wife Susie. In May, 1929 Powell was issued a permit to tear down a frame house at 3115 State, and he built his 40-room hotel on the property soon after. The Powell Hotel was where almost every notable African-American visitor to the city stayed. By the late 1940s, Powell had built something of a hotel empire in Dallas with several locations. (I will have to write more about him in a future post!) I like this very early ad, from the 1930 directory, describing it as the “Powel Hotel & Pleasure Dome.” The photo shows a pleasant-looking place, but you and I and Kubla Khan and Coleridge would probably agree it’s no Xanadu.

Speaking of “resting places”… another essential element in any community is the funeral home. One of Dallas’ most prominent undertaking firms for black Dallas was the E. J. Crawford Funeral Home at 804 Good (now N. Good-Latimer, between Live Oak and Bryan), founded by Mr. Crawford in 1909. “The last word in funeralizing.” 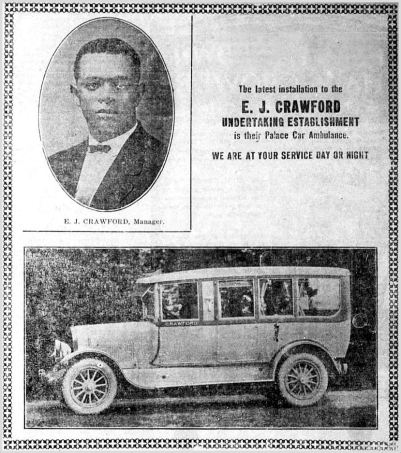 Another prominent funeral home/ambulance service was Black & Clark, founded originally around 1914 by S. C. Black; in 1927 he was joined by his nephew C. J. Clark. For years they were located in Oak Cliff, at 1109 E. Tenth St., west of what is now South R. L. Thornton, near Cliff Avenue. This funeral home is still in business, and there was recently a profile of the Dallas institution on Channel 5 News (watch it here). 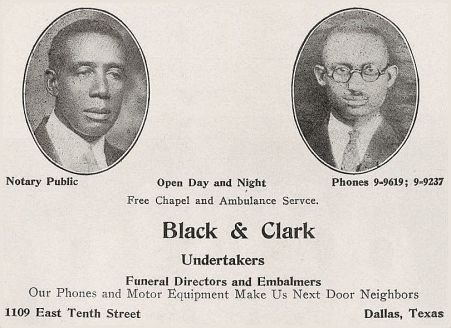 This is Genevieve T. Starks, a woman with a lot of extra-curricular activities! I love this photo.

The G Clef Club was organized around 1921 by Lincolnia Hayes Morgan, music supervisor for Dallas’ (black) public schools. A blurb about the group appeared in The Crisis, the official publication of the N.A.A.C.P.: “The objects of the club are to assist worthy music students and to raise the music standard of the community” (June, 1921).

A popular singing group was the Belt Sacred Quartette (comprised of J. J. Mollis, J. Poindexter, F. W. Grant, and N. Tisdale) — listen to their recording of “I Have Another Building” below.

The Davis Bible Singers (C. Davis, I. H. Burrell, R. Smith, and O. B. Walker) seem to have been pretty popular, having appeared on KRLD, WFAA, and WRR radio. They even recorded for Columbia Records (listen to their great recording of “Daniel Saw the Stone” below). 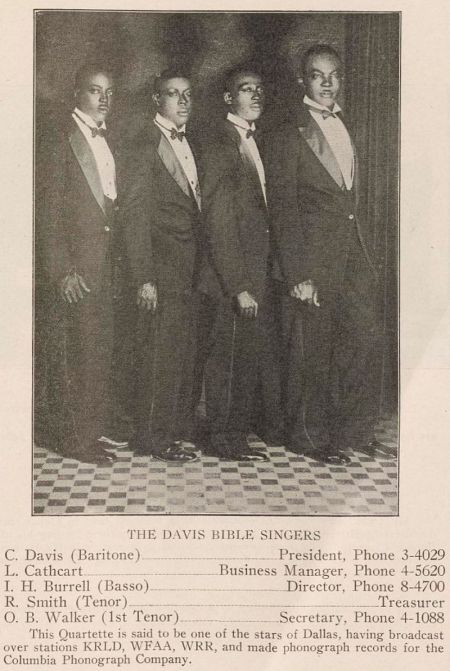 One of the most important doctors in Dallas in the 1920s and ’30s was Dr. Lee Gresham (L. G.) Pinkston (1883-1961), who opened the Pinkston Clinic at 3305 Thomas Avenue, between Hall and Central, in 1928 or 1929 (it made its first appearance in the 1929 city directory). In 1954, Pinkston — physician, surgeon, and civic leader — was one of the first five black doctors allowed to practice in a “white” Dallas hospital (St. Paul’s Hospital) — before that, the only hospital in Dallas where black doctors could practice was the Pinkston Clinic, which had 15 beds (32 beds were allotted for black patients at St. Paul’s in 1954). (See a photo of the five doctors here, Dr. Pinkston is seated.) A new West Dallas school — Pinkston High School — was named in Dr. Pinkston’s honor and opened in 1964, three years after his death.

Below, a portrait of Dr. Pinkston with the artist, Calvin Littlejohn (whom I’d known only as a photographer previously), destined to hang in the new school.

All 1930 images are from Official Directory: Dallas Negro Churches, Schools and Other Activities; Civic, Business, Fraternal, Social, Etc. compiled by James H. Smith, 1930; from the Tarrant County Black Historical and Genealogical Society, via the Portal to Texas History. This fantastic resource is scanned in its entirety here.

See the two other Flashback Dallas posts which also use this wonderful directory as a source: