A couple of ads letting the nation know that construction of the new Dallas-Fort Worth International Airport was progressing and would soon be the biggest, bestest… um, BIGGEST airport ever! “Phase I” was completed by the end of 1973, and DFW opened for business in January, 1974.

The first ad, from Gifford-Hill (click to see larger image — transcription below): 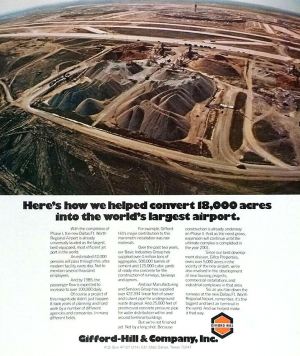 Here’s how we helped convert 18,000 acres into the world’s largest airport.

With the completion of Phase I, the new Dallas/Ft. Worth Regional Airport is already universally lauded as the biggest, best equipped, most efficient jet port in the world.

An estimated 42,000 persons will pass through this ultra modern facility every day. Not to mention several thousand employees.

Of course a project of this magnitude didn’t just happen. It took years of planning and hard work by a number of different agencies and companies. In many different fields.

For example, Gifford-Hill’s major contribution to this mammoth installation was raw materials.

Over the past two years, our Basic Industries Group has supplied over 4 million tons of aggregates, 500,000 barrels of cement and 125,000 cubic yards of ready-mix concrete for the construction of runways, taxiways and aprons.

And our Manufacturing and Services Group has supplied over 422,334 linear feet of sewer and culvert pipe for underground waste disposal. And 25,000 feet of prestressed concrete pressure pipe for water distribution within and around terminal buildings.

But we’re not finished yet. Not by a long shot. Because construction is already underway on Phase II. And as the need grows, expansion will continue until the ultimate complex is completed in the year 2001.

Since our land development division, Gifco Properties, owns over 5,000 acres in the vicinity of the new airport, we’re also involved in the development of new housing projects, commercial installations and industrial complexes in that area.

So, as you taxi down the runways at the new Dallas/Ft. Worth Regional Airport, remember, it’s the biggest and best air terminal in the world. And we helped make it that way.

The second ad, from LTV, touting their automated AIRTRANS all-electric transportation system which carried people and cargo around the airport. 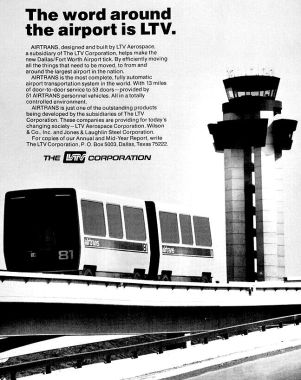 The word around the airport is LTV.

AIRTRANS, designed and built by LTV Aerospace, a subsidiary of The LTV Corporation, helps make the new Dallas/Fort Worth Airport tick. By efficiently moving all the things that need to be moved, to from and around the largest airport in the nation.

AIRTRANS is the most complete, fully automatic airport transportation system in the world. With 13 miles of door-to-door service to 53 doors – provided by 51 AIRTRANS personnel vehicles. All in a totally controlled environment.

AIRTRANS is just one of the outstanding products being developed by the subsidiaries of The LTV Corporation. These companies are providing for today’s changing society – LTV Aerospace Corporation, Wilson & Co., Inc. and Jones & Laughlin Steel Corporation.

And because AIRTRANS is getting its day in the sun, here’s a local ad for its troubled “surface” counterpart (I just learned that “SURTRAN” stands for “surface transportation”) — the bus/taxi/limo system designed to get people to the airport from Dallas or Fort Worth. As this ad says, a one-way bus ticket was $2.50 (about $15.00 in today’s money). SURTRAN seems to have been financially troubled from the beginning — SURTRAN service ended at the end of October, 1984. 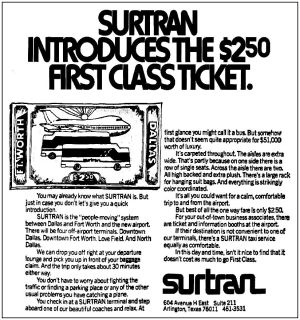 End of Phase I: 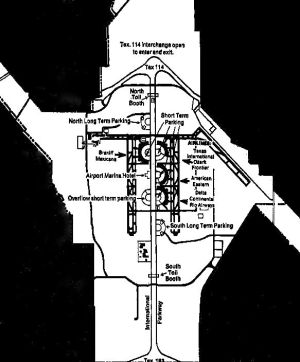