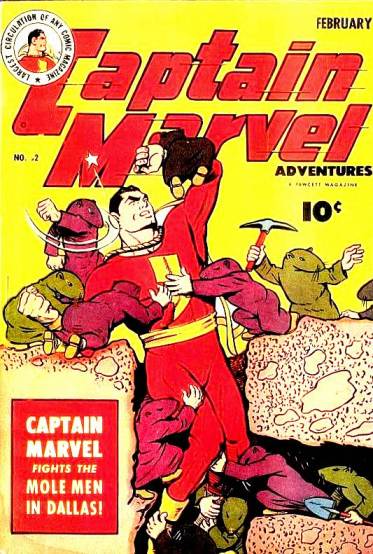 In 1944 Captain Marvel came to Dallas. He had brushes with the SMU marching band, Love Field, Mayor Woodall Rodgers, Fair Park, the Cotton Bowl, a sunken Adolphus, Ted Dealey, and a bunch of “expert lariat throwers.” And he saved us from the Mole Men (and their “mole-kids”). People, you have NO idea…. A few of the highlights below (click for larger images). (To go directly to the entire scanned comic book, click here.) 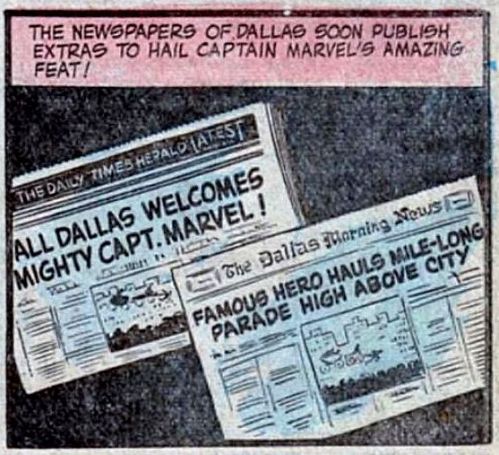 Holy Moley! That was close! Thank you, Captain Marvel! SHAZAM!

To read the entire adventure “Deep in the Heart of Dallas” — in fact, to read the entire comic book (which also includes a trip to Greenpoint, Brooklyn…), check out the whole thing here. Enjoy! (And sorry about the spoilers!)

Some panels are larger when clicked.

In addition to the blog, Facebook, and Twitter, Flashback Dallas has now expanded into Instagramland — for those of you afraid of long-term commitment! (And, yes, this is all rather excessive….) I’m posting images from months ago — so check them out in case you might have missed them the first time around!

Find me here (on your desktop), or on your phone at @flashbackdallas. 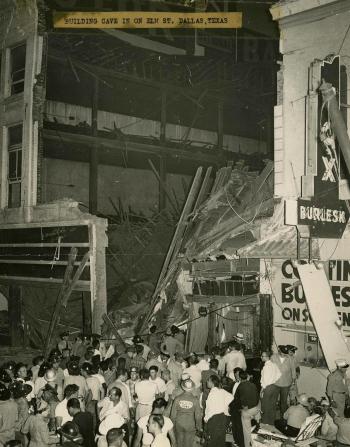 At 6:40 p.m. on June 1, 1955, a 3-story building in the process of being razed collapsed onto the smaller building next door at 1409 Elm St. The “story-and-a-half” building contained the Cline Music Company and Harry’s Fine Food, a bar and cafe. Four people were killed, and several people sustained major injuries; many were trapped for hours in the rubble.

The rousing report in The Dallas Morning News the next day described the scene as pandemonium. As emergency personnel arrived and rescue operations began, the street was roped off — there were fears a partially standing wall would topple at any moment. The Fox Burlesk house next door was quickly emptied of its 50-or-so patrons for safety concerns.

Witnesses said the building fell with a gigantic whoosh and spewed rubble about four feet deep across the sidewalk and into the street. Trolley wires were snapped and lay crackling sparks in the street for a while before the power was cut. A late-model station wagon parked at the curb was flattened under the rubble to a height of only about three feet. It belonged to [the owner of the music store]. (DMN, June 2, 1955)

Nine companies of firemen and several doctors — one of whom just happened to be passing by the scene — worked to rescue and treat the victims. A passing clergyman administered conditional last rites for those still trapped. A troop of Boy Scouts who had been nearby practicing civil defense drills, ran to help in the real-life emergency. And most cinematic of all, a Houston truck driver named Larry Ford — who just happened to be visiting Dallas and was standing in the crowd of spectators — was called in to help when someone noticed that he was wearing a truck drivers’ union insignia — authorities had obtained a winch truck to clear the heavy rubble but had been unable to find anyone to operate it. Ford sprang to action and worked through the night for 16 grueling hours. He was later hailed as a hero. Just like in the movies.

So what caused the collapse? The city manager was quick to say that the city was not to blame and, basically, had no responsibility to determine who WAS to blame.

City Mgr. Elgin Crull told The News an investigation by Chief Building Engineer Cecil A. Farrell has not been completed. “There won’t be anything on it for a long, long time — if ever at all,” Crull declared. “It’s not our responsibility to say why it fell or who was at fault. We’ll just seek to determine whether or not all the proper safety precautions were followed.” (DMN, June 3, 1955)

Well, all right, then.

As several people noted, had the collapse happened an hour earlier — in the midst of rush hour — many, many more people would have been killed and injured. I’m not sure if the cause was ever determined. The block (between Field and Akard) now contains the old First National Bank Building, built a decade later.

UPDATE: Just stumbled across this UPI photo, posted a few years ago by Robert Wilonsky on the Dallas Observer’s Unfair Park blog:

And below, a photo showing the 1400 block of Elm in the 1920s (looking west from Akard), with the “cafeteria” sign in front of the doomed building, to the left of the Fox Theater. The wall with what looks like the beginning of the word “Steinway” is the one that crushed its neighbor. (From Troy Sherrod’s Historic Dallas Theatres; photo from the Dallas Public Library.)

The first two photos are from the collection of the Dallas Firefighters Museum, via the Portal to Texas History; they can be seen here and here.

The reports of the collapse that appeared in The Dallas Morning News are pretty exciting to read. You can find them in the newspaper’s archives.

Click pictures for larger images (especially the first two, which are HUGE).