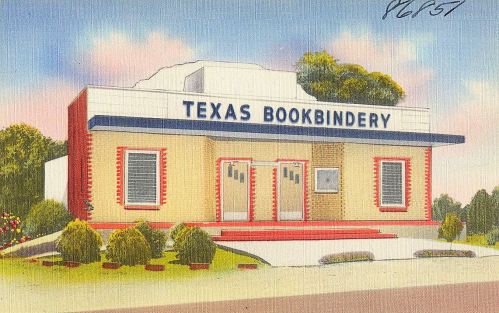 Old postcards, such as the one above, are perfect little fictional jewels. One knows instinctively when looking at them that they show a highly idealized version of reality. I almost didn’t want to find out too much about the Texas Bookbindery, because I love this image so much, and I was pretty sure that if the simple-but-charming building still stood, it wouldn’t really look like a happy little place atop a slight hill, with lovely landscaping, where butterflies flitted among the flowers and bluebirds sang in the nearby trees.

I didn’t find out much about the Texas Bookbindery, except that it seems to have been in business from at least the late 1940s until the late ’60s or early ’70s. It was managed by a man named T. Bernard White, who was featured in a 1948 Dallas Morning News article about the horrible things people do to library books (the Dallas Public Library sent the bindery what sounds like an unending stream of not-quite-destroyed books which were still repairable).

Apparently bookbinderies keep a pretty low profile, because the only other mention I found in the newspaper about this one was in 1962 when a large number of the 37 employees (“mostly women”) were overcome by fumes from poorly-vented gas heaters in the “one-story sheet-metal plant” (yes, a large sheet-metal structure extends behind the deceptively cheery street view). That story listed the address as 714 N. Justin, in the Arcadia Park area of Oak Cliff. I was almost afraid to plug that address into Google. As well I should have been. Here’s what that sweet little building looks like now (but …the shrubs! …the flowers! …the BLUEBIRDS!!): 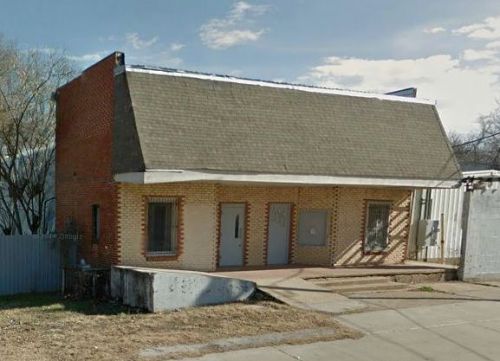 UPDATE: A month after I wrote this post in November, 2014 the Google car drove down N. Justin and snapped a new Google Street View of the poor little bindery — it looked even sadder: it had a big hole in its roof. In March of 2017, that hole-in-the-roof image from December, 2014 has yet to be updated. See it here.