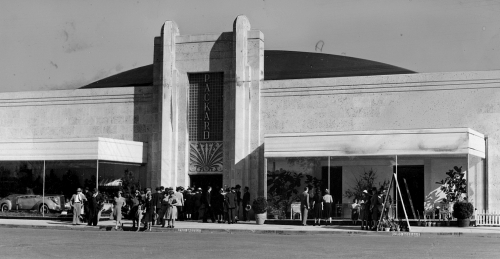 In late summer of 1939, a new 60,000-square-foot. $250,000 home for Packard-Dallas, Inc. featuring a “luxurious showroom” was announced. The first Packard automobile dealership had opened in 1933 at Pacific and Olive, and in the intervening six years, their growth had been tremendous, necessitating several moves and expansions.

The attractive art deco building, faced with Cordova limestone and decorated with glass bricks, cast aluminum letters, and neon, was designed by J. A. Pitzinger and Roy E. Lane Associates, and was constructed at 2222 Ross Avenue in a mere three months. The large building was right across the street from the Cathedral of the Sacred Heart, in the block bounded by Ross, Crockett, San Jacinto, and N. Pearl. The president of Packard-Dallas was J. A. Eisele and the secretary-treasurer was his son, Horace. The grand opening on Dec. 16, 1939 was a big enough deal that the home-office Detroit honchos flew in, and there was even a 15-minute radio program devoted to it on KRLD.

Under the headline “Growing With Dallas,” the opening-day ad featured a photograph of Joe and Horace Eisele and “A Message of Appreciation and an Invitation”: 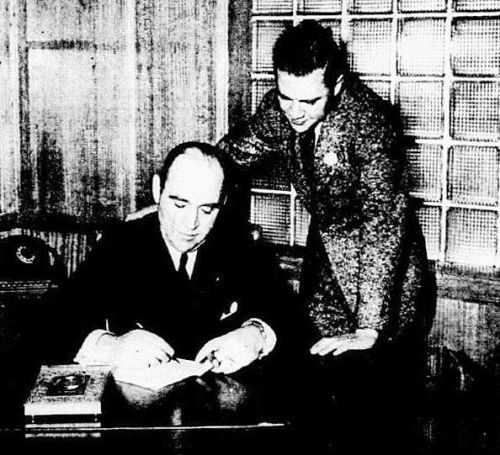 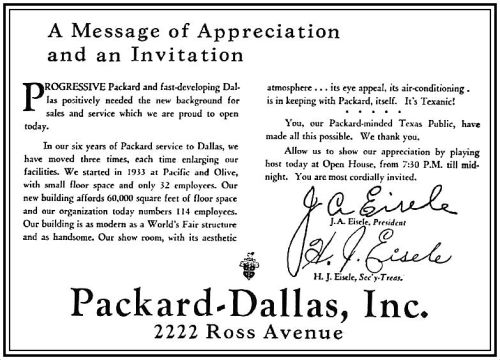 And another ad featured this nifty little line drawing of the cool building:

One of the stories about the opening of Dallas’ new auto showroom palace boasted that this big, beautiful, brash building was here to stay — Packard-Dallas had a 15-year lease on the place. …Which is why it was surprising to read that the building was sold less than two years later.

The U.S. was on the inevitable brink of involvement in the European war, and the National Defense School had begun operation in Dallas in July, 1940. After a year of classes in which young men were taught “to do the technical and mechanical work necessary to warfare” (DMN, March 20, 1941), classrooms at the Technical high school and at Fair Park were bursting at the seams, and a larger facility was necessary. The Dallas Board of Education (which oversaw the program, often called “the War School”), was given the go-ahead to purchase the building (and, presumably, the property) for $125,000 in August, 1941.

I’m not sure why J. A. Eisele sold the building (his name was listed as owner, rather than the Packard Company) — it wasn’t even two years old, and he got only half of what it cost to build. Patriotism? His son Horace had been drafted in April, so … maybe. Eisele seems to have left the auto sales business, which he had been in for decades, and had moved out of Texas by 1945.

After the U.S. officially entered the war and it became obvious that “defense schools” around the country would have to admit women in order to maintain manufacturing quotas, women began to work beside men at the Ross Avenue school in January, 1942.

This “War School” was a training school for war-time jobs at places like North American Aviation.

Thousands of men and women trained at the Ross Avenue facility until the war ended in 1945. The school continued, but no longer as a Defense School — it became Dallas Vocational School, and its first students were veterans.

In 1976, the school was designated as one of the Dallas Independent School District’s magnet schools — it became the Transportation Institute, where “students interested in owning their own dealership, becoming a technician-mechanic or an auto body specialist will receive on the spot training in a laboratory consisting of a new car showroom, a modernly equipped repair center and a complete auto rebuilding facility” (DMN, Aug. 22, 1976). Back to its roots! And it only took 37 years.

The school continued for a while but, inevitably, the property became more and more attractive to developers. In 1981, as the developers were circling, a City Landmark Designation Eligibility List was issued. It contained buildings which had “particular architectural, historical, cultural and/or other significance to the City of Dallas,” and, if approved, were eligible to receive historic landmark designation. I’m guessing 2222 Ross Avenue didn’t make the cut, because Trammell Crow bought the building in 1983 and tore it down the next year.

via Lost Dallas by Mark Doty

But … Crow sold the facade to real estate developer and investor Lou Reese, who said that he would reassemble the limestone facade and incorporate it into a restaurant he planned to build in Deep Ellum. That was an interesting plan. (Incidentally, in the same city council meeting in which the demolition/disassembling of the building’s facade was discussed, the council also considered “a request for more than $7 million in federal funds for a project to renovate the Adams Hat Co building into apartments” (DMN, Aug. 8, 1984). …Lou Reese owned the Adams Hat building. What a coincidence!)

The council authorized developer Trammell Crow to disassemble the art deco facade of the former Transportation Institute Magnet High School on the condition that the facade be reconstructed in Deep Ellum…. The company [has] demolished all but the building’s limestone facade, which was determined to be eligible for designation as an historic landmark. (DMN, Aug. 9, 1984)

So? Where’s that facade? There was no mention of it for three years, until an article in the Morning News about another developer who had big plans for a major Deep Ellum complex called “Near Ellum,” which would be be bounded by Commerce, Crowdus, Taylor, and Henry streets.

Highlighting Near Ellum will  be a 40-foot art deco facade, formerly on the front of the Transportation Institute on Ross Avenue, in the main parking plaza. The plaza will also include an outdoor stage for concerts and special events. (“Developer Plans Deep Ellum Project,” DMN, June 25, 1987)

Aaaaaaaaaaaaaaaand … that never happened. I wonder if that 76-year-old disassembled limestone facade is still crated up somewhere around town? Somehow I doubt it.

So, 2222 Ross Avenue. What’s there now? None other than the 55-story skyscraper, Chase Tower, also known as “The Keyhole Building.”

You could get a lotta Packards in there.

The developer who apparently came into possession of the facade after Lou Reese was Ed Sherrill. Perhaps someone associated with the Near Ellum project might know what became of the “saved” facade.

Chase Tower info on Wikipedia here; photo of it here. Imagine a teeny-tiny car dealership at its base.

Packard automobiles? Some of them were pretty cool. Check ’em out here.

A lengthy article on the notorious developer Lou Reese — “Hide and Seek” by Thomas Korosec (Dallas Observer, June 8, 2000) — is here.

Most images larger when clicked.