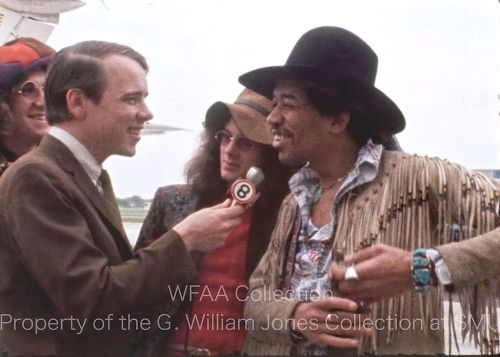 One of the advantages of living in a major American city is that all the biggest entertainers visit at one time or another. Let’s take three of the biggest entertainers of 1969: Jimi Hendrix, Glen Campbell, and Tiny Tim. All were huge, and all came to Dallas. And, luckily for us, they were captured on film in interviews by reporters from WFAA-Channel 8.

For me, without question, the most exciting interview was the one with Jimi Hendrix, who, standing on the tarmac of Love Field with bandmates Mitch Mitchell and Noel Redding on April 20, 1969 (yes, 4/20…), gives a great, relaxed interview to a very lucky Channel 8 reporter, Doug Terry. (I love the look on Terry’s face throughout the interview.) Watch it here: 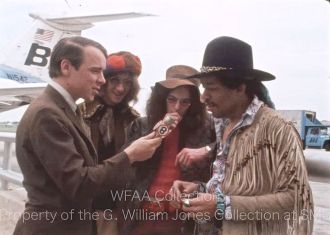 Two surprising errors (grammatical and factual) appear in a Neiman-Marcus tie-in ad (of sorts) which states that Jimi would be at Memorial Auditorium, rather than Moody Coliseum. Despite the error, it’s cool that Neiman’s was expanding its cultural horizons to include someone like Jimi Hendrix in one of its ads (which was featuring teen fashions, but still). N-M has always had its finger on the pulse of current fashions — and Jimi Hendrix was certainly fashionable.

Glen Campbell was in town for several days in June, 1969. He arrived at Love Field on June 15 and was met by a “high-spirited throng” of teenage admirers. He was here to promote the release of the movie True Grit (in which he appeared with John Wayne), as well as to perform at Memorial Auditorium on June 19, 1969.

He was actually in Dallas the previous year, in March, 1968, to perform at the State Fair Music Hall with Bobbie Gentry. An interview with the pair begins at 3:57:

And Tiny Tim was in Dallas on June 17, 1969 to appear at a book-signing at the downtown Sanger-Harris department store. The signing was a bit more sedate than his previous visit to Dallas when he caused something of a riot on January 23, 1969 while making an appearance at the Melody Shop in NorthPark. I’m not sure what sort of crowd the Melody Shop thought they’d get for their little “autograph party,” but it’s safe to say they did not expect 5,000 over-excited teenagers. The news report the next day was peppered with words like “pandemonium,” “swarm,” “mob scene,” and “human wall.” (Read about that bizarre event here). His drawing power continued the next year when Tiny made his Dallas performing debut at … of all places … Abe Weinstein’s Colony Club, one of the city’s top “burlesque” houses. He was booked for an incredible 9-night run (!) in September, 1970. It was a major success. Dallas apparently loved Tiny Tim. And, of course, years later, Bucks Burnett’s Edstock and Burnett’s tiny Tiny Tim museum continued the Big D/Tiny Tim lovefest. 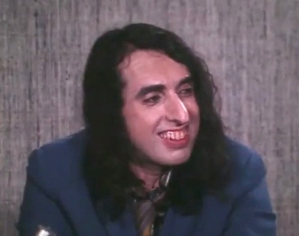 Video is from the WFAA Newsfilm  Collection, held at the Hamon Arts Library, Southern Methodist University; screenshots are from those clips. Any requests to license these clips (or any of the other thousands at SMU!) should be directed to curator Jeremy Spracklen.

While you’re in the archives, look for the interview with Glen Campbell at Love Field amidst the frenzied teenage girls: “High-Spirited Throng — Fans Mob Glen Campbell at Airport”  by Maryln Schwartz (DMN, June 17, 1969).