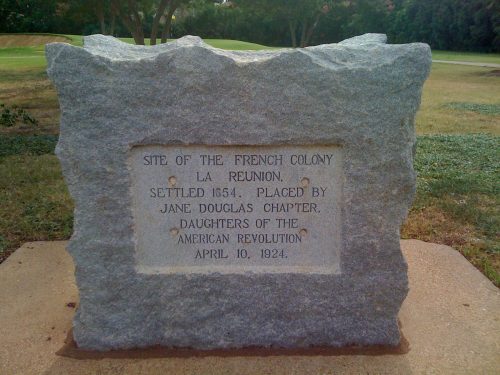 Today a short and informative radio piece on the La Reunion French colony was aired across the state on the public radio program Texas Standard. The story was produced by Stephanie Kuo of KERA News, who was nice enough to invite me to participate as one of the interviewees (along with Dallas historian and storyteller Rose-Mary Rumbley and developer John Scovell). Listen to the 5-and-a-half-minute story here on the KERA site, or here on the Texas Standard site, via Soundcloud.

I’ve written about La Reunion before, but here are a few photos I took last year when I trekked over to all that remains of the original colony, its cemetery (known as both “La Reunion Cemetery” and the less romantic “Fish Trap Cemetery”). It’s fenced off to protect the few remaining historic grave markers, which have been eroding in the elements for over 160 years. Somehow I walked away having taken photos only of grape leaves and flowers and not the cemetery. (There are several photos online of the cemetery, including this one, from the Dallas Parks department; read the Texas Historical Commission marker here. You’ll note that 20th-century headstones can be seen: the cemetery was an active cemetery well after the colonists had moved away; in fact, Bonnie Parker was originally buried there until her remains were moved to the Crown Hill Cemetery.)

There are surprisingly few monuments or plaques in Dallas recognizing the historically important colony. In April, 1924, the Jane Douglas Chapter, Daughters of the American Revolution dedicated the very first monument to the La Reunion settlement. The site of this granite marker was originally at Westmoreland and Fort Worth Avenue, but the marker (seen at top) was moved at some point to its current home, on the golf course of Stevens Park. 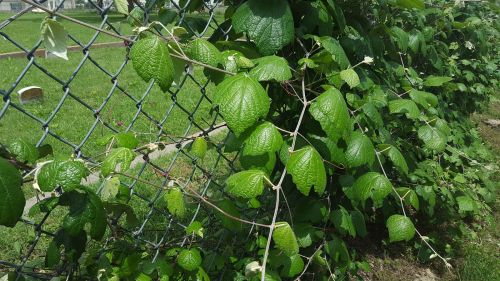 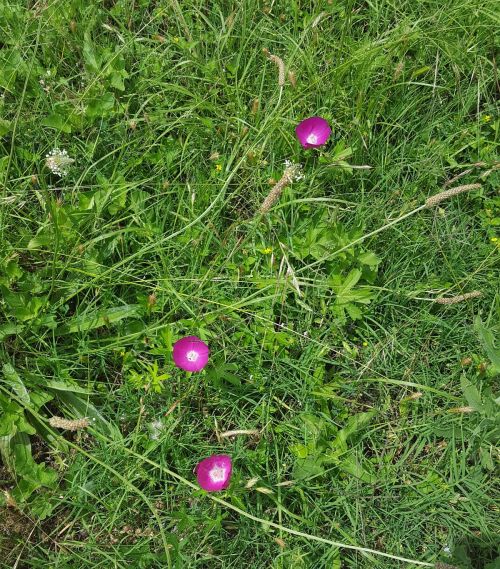 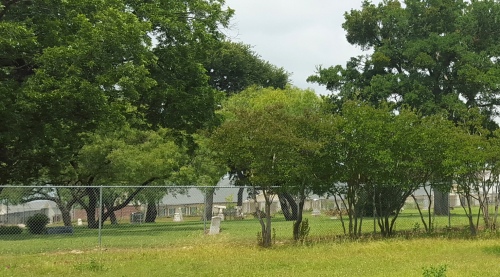 Photo of the 1924 marker, relocated to Stevens Park, is used with permission of Big D History.

All other photos were taken at La Reunion Cemetery/Fish Trap Cemetery in West Dallas by Paula Bosse on May 21, 2016. The location of the cemetery can be seen on Google Maps here.

An interesting tidbit about the grapevines: when the French colonists prepared to venture to Texas, several took cuttings of plants to take with them, with the intention of planting them in their new home and being able to enjoy wine made from the grape varieties of their homeland. When the colonists arrived in Texas, they planted/propagated the cuttings in Houston, unsure if the plants would survive the month-long walk (!) to Dallas after the lengthy ocean crossing. The flourishing plants were uprooted and transported to La Reunion by later arrivals. It is not inconceivable that the grape leaves seen growing today at the colony’s old cemetery might be descendants of the colonists’ imported grapevines.

The location of the La Reunion land was, more or less, 2,000 acres in West Dallas, with modern-day boundaries being Westmoreland on the west, N. Hampton on the east, the south bank of the Trinity on the north, and W. Davis Street on the south.

In a 1933 letter to The Dallas Morning News, Dallas resident George Cretien — who was born in 1856 in La Reunion (“Frenchtown to the native”) — disputed the location of the colony being near Westmoreland, where the old Delord ruins still stood at the time:

“The village of the colonists was located about a mile northeast of the Delord place on the bluff that the cement company has mostly destroyed for the making of its product.” (DMN, Sept. 17, 1933)

So there. In other words, Cement City: The Early Years.

Thanks again to Stephanie Kuo of KERA for inviting me to participate!