In April, 1934, at the height of Bonnie and Clyde’s murderous crime spree, Dallas County Sheriff Smoot Schmid issued a warning to amorous Dallasites to curtail their necking in cars parked along dark, deserted country roads — at least while the Barrow Gang was at large. He even asked school superintendent Norman Crozier to make a special broadcast to high school students, warning that such behavior could be dangerous, if not life-threatening. A Dallas Morning News article advised people from “parking” “until after Clyde Barrow is killed or captured.”

“It’s a request that all citizens should observe,” Sheriff Schmid said. “There are many officers taking part in the hunt for Barrow. Some of them are young and inexperienced. All of them are very anxious to catch Barrow. If someone should mistake one of them for a hijacker he might get killed, or kill the officer. Either way it would be a terrible thing. I just want to prevent any unnecessary trouble if I can.” (“Sheriff Warns Against Parking,” DMN, April 13, 1934)

A few weeks later, Bonnie and Clyde were ambushed and killed in Louisiana. Once their deadly rampage had ended, Dallasites were, presumably, free to resume their “nocturnal necking.” 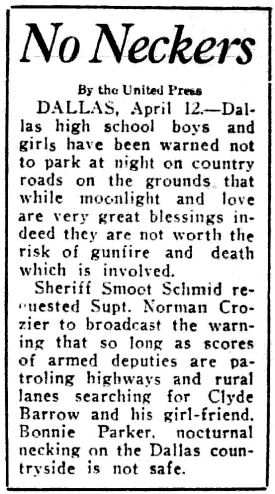 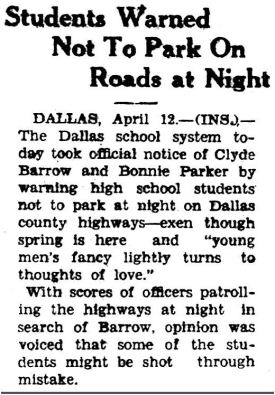 Top image is the lurid front cover of a rare 1935 Mexican publication about Bonnie Parker and Clyde Barrow titled “La Pistolera de Texas” — it is from the collection of the Dallas Historical Society and was featured on their Instagram feed (more info is here).