What could have been at Fair Park: a really, really big star…

As this year’s State-Fair-of-Texas-that-wasn’t draws to a virtual end, I thought I would post this image I came across a while ago — I’d never seen it before, and it’s something of a mystery. It appeared in a 1972 Dallas Museum of Art exhibition catalog called “1930s Expositions” (link at bottom of post). One of the expositions covered in the catalog was the Texas Centennial Exposition held at Fair Park in 1936. Most of the buildings we see today were built in 1935/1936, and the entire sprawling project was led by visionary chief architect George L. Dahl of Dallas. The description of this image reads:

“The monumental scale of the central area of the Exposition was set by the massive pylons which formed the entrance to the Centennial. How even more heroic would have been George Dahl’s proposed ‘Lone Star’ entrance.”

Whoa! Can you imagine that gigantic star spanning the entrance? A sort of  Colossus of Rhodes for Big D! (Big Tex is as close to a Colossus as we’re going to get.)

I searched and searched but could find nothing more about this incredibly dynamic Dahl vision. The closest I got was not what I was looking for, but it was still pretty interesting.

“Erection of a star-shaped building at a cost of $1,000,000 will be asked of the Legislature… This structure would be administrative headquarters for the central exposition in Dallas.” (Dallas Morning News, Dec. 9, 1934)

My first thought was, “Is that thing a building?” And then I searched on “star-shaped building” and found that there had been an extremely controversial “star-shaped building” built as the “Texas Building” at the St. Louis World’s Fair in 1904. Super-wealthy Texan E. H. R. Green was so appalled at the building’s design (by St. Louis-born Texas architect C. H. Page) that he resigned from the state commission in protest, saying this:

“I am not in any way to be identified with the official responsibility of the building that portrays Texas as a freak and that is what that star-shaped building does. No one ever heard of such a type of architecture before. I want a building that will impress those who see it with the idea Texas has some dignity.” (Fort Worth Star-Telegram, April 12, 1903)

St. Louis built it anyway. It was kind of freaky — especially with a replica of the State Capitol dome awkwardly plonked down in the middle (gilding the lily, man…) — but it was, apparently, quite popular. See a ground-level photo of the Texas Building here — and here’s a drawing:

That was an odd little detour. Anyway….

About that star over the Parry Avenue entrance to Fair Park — I’d love to know more about it. I’d love to see a better image. Anyone know anything? I wonder if Dahl’s plans and drawing for this giant Lone Star might be resting comfortably in the Dallas Historical Society archives?

Here’s the entrance design which was ultimately decided on — the one we still see today at Parry and Exposition. Yeah, there’s a star there, but now that I’ve seen what we could have had, it seems kind of puny. What it lost in overall heft it gained in height, I guess. But just imagine what it COULD have been! 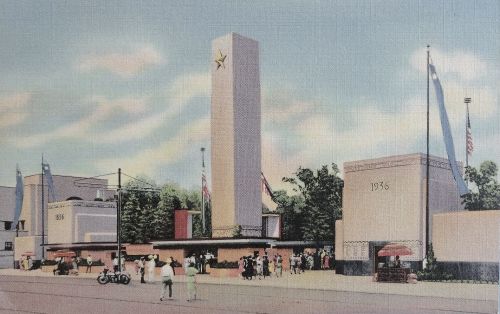 Top image is from the 1972 Dallas Museum of Art catalog for the traveling show “1930s Expositions” (page 16); a scan of the catalog can be found at the Portal to Texas History here, and at the DMA website here.