Today is the birthday of my late father, and as a little tribute to his profession, I usually try to post something bookstore-related on his birthday.

A few weeks ago historian Rusty Williams (check out his books) sent me a great article from 1947 by publisher and bon vivant Bennett Cerf who wrote giddily about the Dallas book scene (and about Dallas in general). It’s a little over-the-top, enthusiasm-wise (Cerf was a master publicist and promoter), but he writes with genuine affection about notable bookstores and book people, including Cokesbury and its legendary manager Bliss Albright, McMurray’s Book Store and its legendary owner Elizabeth Ann McMurray, and big-time book collectors Everette Lee DeGolyer and Stanley Marcus. The article was published in the April 26, 1947 issue of Saturday Review, and it can be read here.

Cokesbury was described as being the largest bookstore in the world at one time. After a sizable expansion, it covered six floors and had 18,000 square feet of room for books. The building, designed by Mark Lemmon, was at 1910 Main Street, at St. Paul, with entrances on both Main and Commerce. (And those rounded bookcases are cool.) 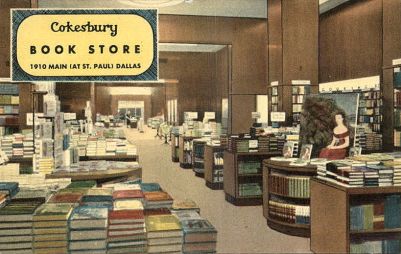 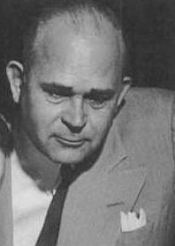 The other bookstore mentioned in the article is McMurray’s, a bookstore which is generally written about with impassioned reverence and awe — it may well be Dallas’ most highly regarded bookstore ever. Wish I could have seen it. Where Cokesbury was a massively large bookstore carrying a wide variety of new books, McMurray’s was definitely more of a “curated” small shop, which, from what I gather, served almost as much of a place for literary elites to gather for informal salons as it did as a retail bookstore. If you were a writer of any heft visiting Dallas, you made the pilgrimage to Commerce Street to check out McMurray’s.

Read about the history of both Cokesbury and McMurray’s (and other Dallas bookstores) (except, oddly, the Aldredge Book Store, the store my father was associated with for decades!) in the article “The Personal Touch: Bookselling in Dallas, 1920-1955” by David Farmer, which appeared in the Fall 1993 issue of Legacies. There are some great photos.

Another informative article (with even more great photos!) is “Cokesbury Book Store: The Premiere Book Store in the Southwest” by Jane Lenz Elder, which appeared in the Fall 2012 issue of Legacies.

Top photo is from the Jane Lenz Elder Legacies article.

The Cokesbury postcards were found randomly on the internet.

The photos are from David Farmer’s book Stanley Marcus: A Life with Books (TCU Press).

Thanks again to Rusty Williams for sharing the Bennett Cerf article. Rusty’s newest book, Deadly Dallas: A History of Unfortunate Incidents and Grisly Fatalities, will be published in June, 2021.

More on Dallas bookstores can be found in a bunch of Flashback Dallas posts here.