A hidden gem at Preston and Forest…

I was contacted by someone over the weekend about a photo I had posted to my personal Instagram back in 2014. And that reminded me that I’ve been meaning to post these photos for several years now! (Thanks, G.H.)

Back in June, 2014, I saw a Dallas Morning News blog post by Rudy Bush, saying that he had just seen a pretty amazing mural after having gone to get a haircut in the Preston Forest Shopping Center and that he was hoping to find more information about it. He posted a photo, and it was COOL! I’d never seen it, and started looking to see what I could find. Rudy included my info in a later DMN blog post, with a nice link to my brand new Flashback Dallas site.

The 80-square-foot tile mosaic — made up of more than 46,000 ceramic tiles — shows the Dallas skyline of the late 1950s. It was created by Cambridge Tile Co. of Ohio (with a factory in the Trinity Industrial District) and installed by H. J. Palmer Tile Co. of Dallas. The mural was commissioned by George F. Mixon Sr. and George F. Mixon Jr., developers of several North Dallas shopping centers, including the Preston Forest Shopping Center (southeast corner of Preston and Forest). The mural was installed in the shopping center office.

I haven’t been over to see it since 2014, but I assume it’s still there. It’s about halfway between Staples and Whole Foods, next to a barber shop. It’s in the small lobby of office space you might never have even noticed. And it is wonderful. Unfortunately, it’s in a hallway, so there’s no way to take a photo of the whole thing straight on. Even when you’re standing looking at it, it’s like being on the front row of a movie theater — the only way to see the whole thing is to move your head from side to side as you feel yourself straining to lean back to take the whole thing in.

I know it was commissioned especially for this building, but no one ever sees it! It would be great if it were installed somewhere else where more people could enjoy it. I love it. Go and see it! And have fun identifying all the landmark buildings. (UPDATE: I have been informed by several people who have made the pilgrimage to Preston-Forest to see this mural that it is no longer accessible to the general public. What a shame!) 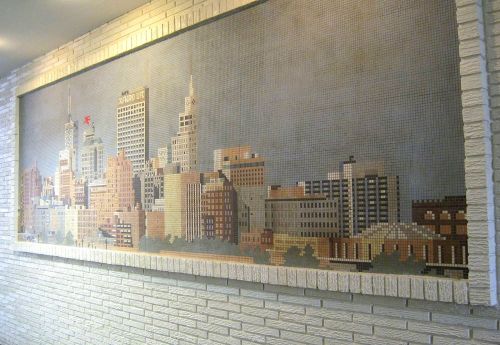 And, of course, my favorite detail — look what you can do with 29 red tiles: