Soccer — which the local newspapers insisted on calling “soccer football” — was introduced to Dallas as a local organized sport in 1908. The first appearance I can find discussing soccer in Dallas is this article, from the October 18, 1908 issue of The Dallas Morning News:

In 1908, Ernest Oates was a 32-year-old Yorkshireman from the north of England who had been in Dallas only a couple of years when, missing the football matches of his youth, he decided to organize a “soccer” team in Dallas. The sport was virtually unknown in Texas, but because Oates undoubtedly knew everyone in the city who had made their way to the United States from England, Scotland, Ireland, and Wales, he had no trouble organizing a team of experienced players. (Oates also helped introduce Dallas to cricket in 1933.)

After reports that the team had begun practicing at the Lake Cliff ballpark, there was news that another team was being formed in Dallas, this one to be coached by an apparently well-known American coach from St. Louis named William “King” Finnegan. This team seems to have had a harder time getting up and running (probably because Oates had snapped up all the good players). Even though they announced that they would be using Gaston Park as their home turf and practice would begin right away, it actually took them months to get a functioning team together.

Also at this time were vague rumblings of a Scotsman in Fort Worth — Duncan J. Livingston(e) — wanting to get a team going in Cowtown, but he was even slower in getting things organized than Finnegan was (Fort Worth wouldn’t have an official team until late 1909). Meanwhile, The Fort Worth Star-Telegram — whether out of jealousy or spite — couldn’t resist tossing sarcastic soccer-related zingers at Dallas’ attempts to popularize the esoteric sport:

That bon mot was just a warm-up, though, to this offering, which dredged up (as it were) the recent devastating Trinity River flood:

For a while it was looking as if Oates’ “eleven” would have no one to play with. But, unexpectedly, a team appeared —  one fielded by The Dallas Morning News, a team that only a few weeks earlier had been the newspaper’s baseball team! The men on the team had never played soccer, but, as a DMN report had it, “they were game.”

(The timing of the sudden appearance of this team seems a little odd. The Morning News had run several articles about the proposed Finnegan team having actually been organized and in possession of a full roster, but then … nothing more was heard of them. You can’t have a competitive spectator sport with only one side. Cue the WTF entrance of the deus ex machina soccer team full of baseball players.)

So there were really only two teams that played all of the soccer matches in that very short inaugural soccer season: the Dallas Athletics, led by Ernest Oates, and the Newspaper Association team, led by A. McKinnon.

The newspapers tried valiantly to drum up excitement among local sports fans, and they ran lengthy explanations of the game’s rules in an attempt to educated their readers, but I’m not sure how successful they were at either attempt. Tellingly, attendance figures were never reported (except to say that British matches in the UK had no problem attracting crowds of 100,000 fans). The two teams played several games, and the Athletics usually won.

After only four games, the two teams announced that they would have a “state championship” match on Christmas Day. They claimed that they were “the only two thoroughly organized soccer football teams in the state of Texas” — who else would they play in a fight for the championship? 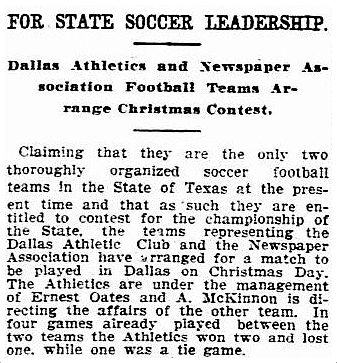 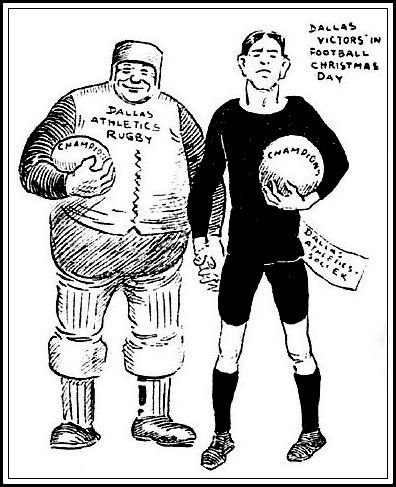 “King” Finnegan (who, incidentally, had acted as referee for the championship game), disputed the whole “champion” thing, saying that his team, the Dallas Soccers, deserved a chance at the title (even though they had, thus far, played exactly zero games). The Athletics shrugged their shoulders and agreed to the challenge, and on New Year’s Day they trounced the Soccers, 6-0.

And so ended the first soccer season in Dallas. Fort Worth did eventually join the fray the next season, but it wasn’t pretty — they were badly beaten in their first few meetings with the mighty Dallas Athletics. Sorry ’bout that, Fort Worth. Don’t mess with Ernest Oates.

Here’s another photograph of Mr. Oates (front row, center) and the rest of his team. It’s been 106 years since soccer aficionados first started swearing that their sport will catch on in Dallas. And catch on big. And now you know when and where all that talk started: in 1908 with Ernest Oates and his Dallas Athletics. 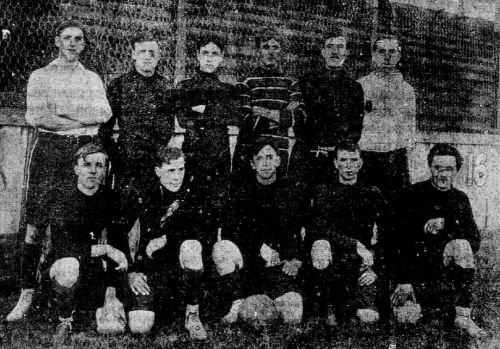 I’ve compiled a PDF containing most of the first few months’ news coverage of this whole new-fangled “soccer football” sport as it appeared in the pages of The Dallas Morning News and The Fort Worth Star-Telegram. I’m not much of a sports fan, but I actually found it very interesting to read chronological, contemporaneous reports of a new sport working its way into the city’s consciousness. I’ve left out the articles that explained AT LENGTH the rules of the game because my eyes (and soul) started glazing over. But the rest of it is here. My favorite headline is from an article about a mismatched game between Dallas and Fort Worth with the Fort Worth headline reading “Visitors Had More Experienced Men and Were in Better Condition” — yep, that’ll do it. There are a bunch of articles, stretching over a bunch of pages, but you might find them entertaining. The PDF can be found here.

A photo of Ernest Oates (1875-1945) and his new (first) wife, the former Helen Lindsay in a wedding announcement (click for larger image).

Oates was a stonemason and owned the Oates Stone Co. on Routh Street (at the MKT railroad). Below is an ad from 1922.