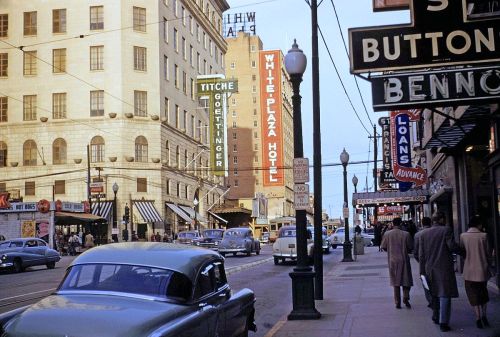 Here we are at the end of another year. Adios, 2021 — I can’t say I’ll miss you. Another year dominated by an inescapable global pandemic, another year of angst and frustration. My output has been fairly paltry this year, but whenever I was able to spend some time working on this blog, I always felt a weird sense of relief — it is someplace I enjoy escaping to, if only for a short while. As always, I appreciate everyone who stops by and takes the time to read. Thank you for your virtual friendship! Fingers are crossed that 2022 won’t continue to be so grueling.

My final post of 2021 contains the year’s Most Popular Posts, determined by page-views, clicks, likes, shares, etc. Here are the most-read Flashback Dallas posts of 2021, starting with the most popular. To see each full post, click on the title; to see larger images of the thumbnails, click on the picture.

This post was so popular it left all the others in the dust. As much as I love black-and-white photographs, color-saturated photos bring both an immediacy as well as a sort of exoticism to 70- or 80-year-old street scenes of downtown Dallas. I love these photos, and, frankly, I would have been surprised if another post could have managed to surpass it in popularity.

Seeing 27-year-old Dallas attorney Linda Coffee in a WFAA-Channel 8 News interview from 1970 a few months ago made a huge impression on me. She had already been working on the local Roe v. Wade case for several months, and she was being interviewed following her first big win in the long journey which would eventually take her and her co-counsel Sarah Weddington to the United States Supreme Court where they successfully argued that women have the constitutional right to decide whether they want to have a baby or terminate a pregnancy. This cataclysmic court decision had a profound impact on women’s rights and on American social culture. The current “revisiting” of the issue to the Supreme Court is no doubt what has helped propel this post to the rank of second-most-popular post of the year. Linda Coffee should be better known. I hope this post introduces her to more people.

This one kind of came out of left field. I’m not sure why there was such a big response to this post which contained ads touting the impending arrival of the massive new airport, but I have to say, I’m a big fan of the photo used by the Gifford-Hill company showing unpaved roads and big heaps of dirt which would one day be magically transformed into Dallas-Fort Worth International Airport.

I just posted this a week ago, and, wow. I knew people loved the NorthPark of their childhood, but I was still a little surprised at the sheer number of hits this post got. Thank you, Raymond Nasher!

Snider Plaza appears several times in this year’s “best of” lists. The University Park shopping area seems to hold as much of a special place in Flashback Dallas readers’ hearts as it does it mine.

This post is filled with photos from the 1929 yearbook of Ursuline Academy, back when it was still a prominent landmark of Old East Dallas. Imagine if we could have saved that amazing building….

Who knew architectural schematics of strip shopping malls (which, are, let’s face it, mostly parking lot…) would be so popular? People love their funky Casa View.

The Dallas-born-and-reared member of ZZ Top, Dusty Hill, died this year. This post contains photos of the young musician from the pages of the 1965 Woodrow Wilson High School yearbook. RIP, Dusty.

This is such a great photo (or maybe a screenshot) of a seldom-seen view of downtown Dallas, looking south from Pacific to the Statler Hilton. I only wish I know where I found it!

It’s back again. More love for UP’s Snider Plaza as people flocked to check out photos of it from its earliest days.