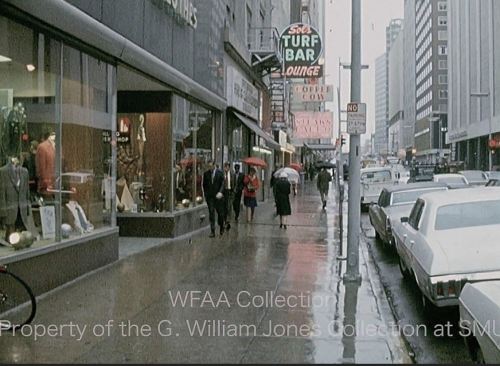 I’ve mentioned that I have been working in the WFAA Newsfilm Collection, which is part of the G. William Jones Film and Video Collection at SMU’s Hamon Library. It’s a lot of fun going through all this footage (even though I have to grin and bear it a bit through all the sports and Commissioners Court meetings!). I thought I’d compile a bunch of random screenshots I’ve collected over the past few months of images I’ve found interesting. They are all from 1970 and 1971. (The link to the YouTube video the screenshot comes from is at the end of the paragraph. Each of these YouTube videos has a description of what’s going on in the clips — click “Show More” to see the full description.)

Below, Medallion Center, at Northwest Highway and Abrams. I posted this on the Flashback Dallas Facebook page and on Instagram and was surprised by how enthusiastically people responded to it. I was really happy to see this brief shot show up in news footage. Instant nostalgia. I remember being in that store a LOT. (Dec. 20-21, 1970) 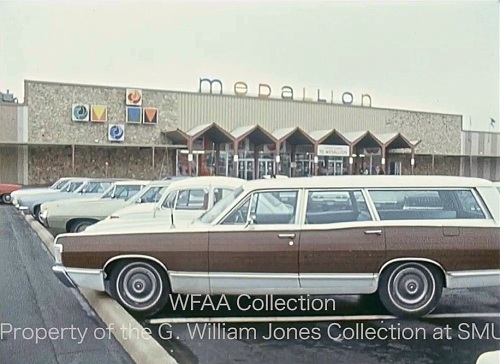 Texas Autorama. Pink car! (I wrote a bit about this fab powderpuff of a car, customized by Arlington’s Bill Meador, here.) A short “curated” clip of cars from this show is here. (The footage is also part of the full collection of that day’s clips here: Jan. 18-19, 1971) 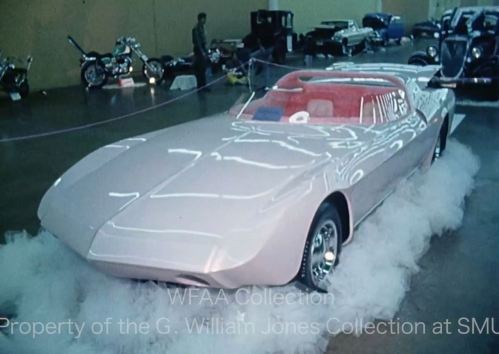 And speaking of pink, while slogging through footage of a boxing match, I really enjoyed this glimpse of the fashionably dressed crowd, especially the guy wearing the pink suit. It takes a secure man to wear a pink suit to a boxing match in Texas. (Feb. 23, 1971) 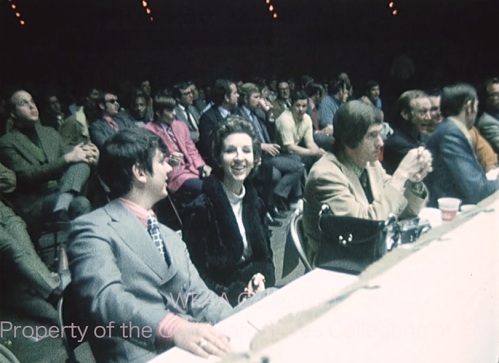 And, on the topic of fashion, there were few other Dallasites who were as strikingly put-together as community activist Al Lipscomb, frequently seen looking cool and wearing shades. Here are a few shots from a 1971 press conference during the time he was running for mayor (Lipscomb was Dallas’ first Black mayoral candidate). Lipscomb lost the mayor’s race in 1971 but later served for several years on the Dallas City Council. (March 3-4, 1971) 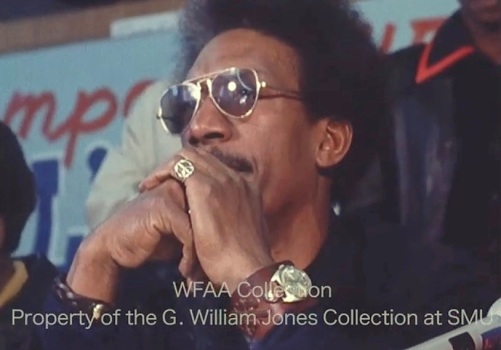 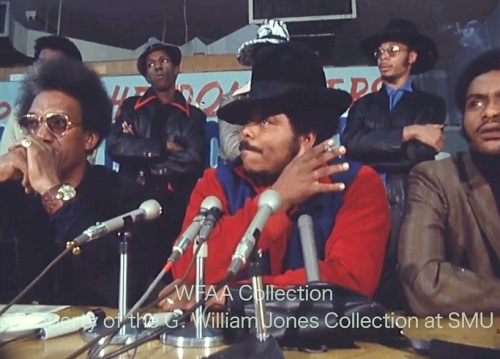 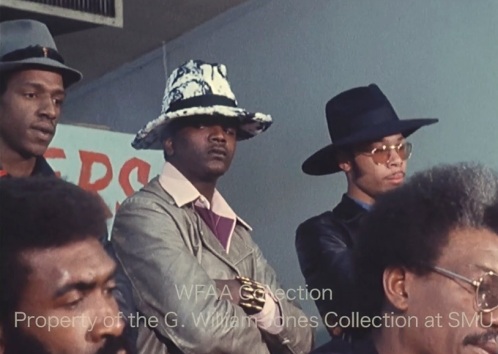 Far beyond what should have been aesthetically acceptable can be seen in this shot of FBI and police investigating a robbery at the downtown Main Street National Bank. As I watched the footage, all I could think about was the WALL-TO-WALL GREEN SHAG CARPETING. …In a bank. Oh dear. The 1970s was not a good decade for interior design. (Dec. 15-16, 1970) 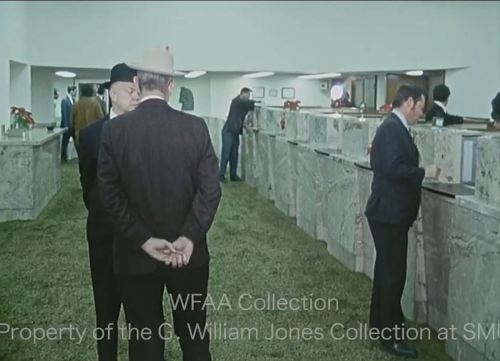 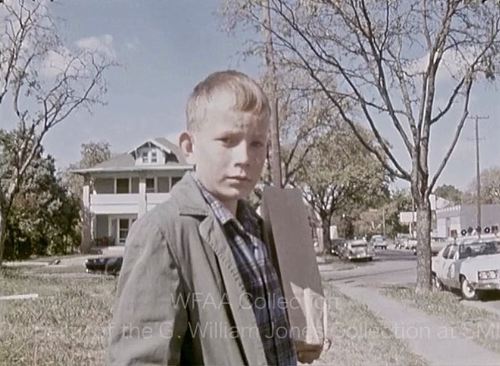 Another child, this is 13-year-old Cecile Richards (daughter of future governor Ann Richards), who had recently moved from Dallas to Austin. She had been named an “honorary girl page,” and in the clip, she is seen being led across the floor of the Texas Senate by State Sen. Mike McKool (her sponsor and a close friend of the Richards family). Cecile was the first girl in the history of the Texas legislature to be named an “honorary” legislative page at a time when all pages were boys. Cecile grew up to be a firebrand of a women’s rights activist, much like her mother. (Jan. 12, 1971) 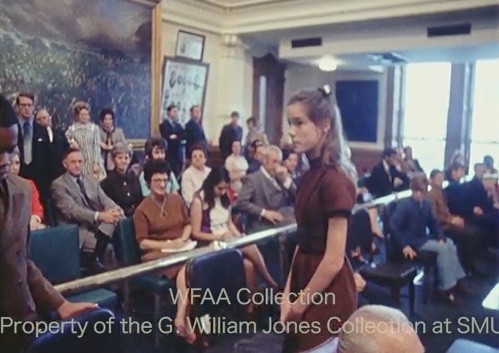 Skillern’s drug store in Lakewood (which I wrote about here). Streets have been rerouted over the years, but this is now near-ish to the site of the Lakewood Whole Foods parking lot. (Nov. 26-28, 1970)

A quick hop over to Lower Greenville, where the Wilson Food Store stood at the corner of Greenville and Goodwin (in the Terilli’s block, seen here several years before the terrible fire hit that block — see a then-and-now comparison here — they did a really good job reconstructing that building). (Dec. 3-4, 1970) 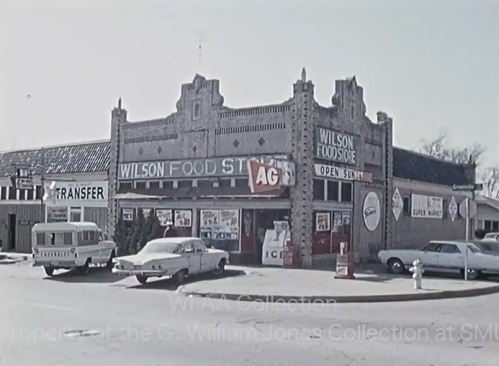 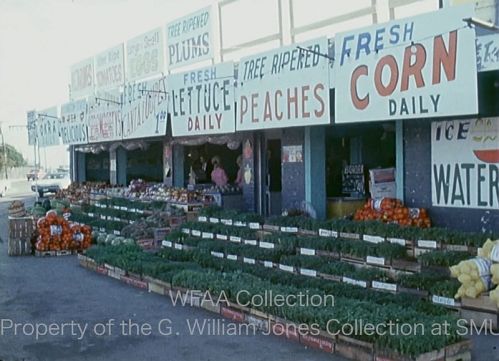 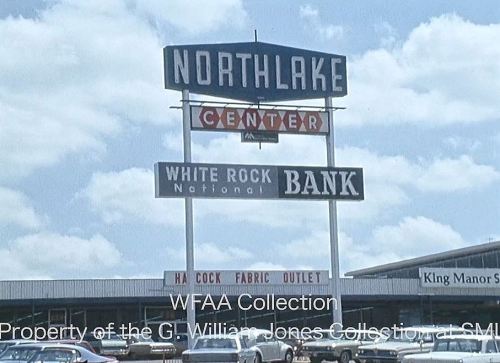 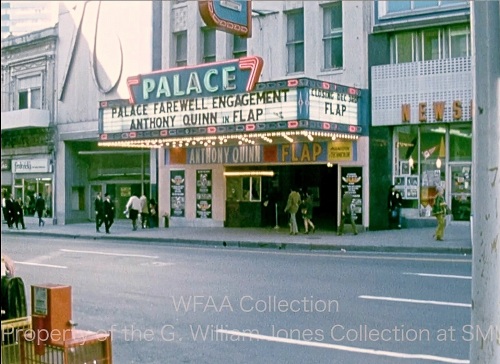 Occasionally on the Flashback Dallas page I will post images of locations I don’t recognize to see if anyone can help — and they usually can. I posted this image of row houses, not even completely sure it showed a place in Dallas. I didn’t really expect anyone to know this, but very, very quickly, Don A. replied that it showed apartments in the 1500 block of Holly, in Old East Dallas (a street I’d never even heard of). Not only did he recognize the location, he actually lived there at one point — it was across the street from his grandparents’ house. And the cars seen in this screenshot belonged to family members! That’s pretty amazing. I found the comments in the Facebook thread very entertaining — you can read them on my public Facebook page here. Thanks, Don! (Mar. 3-4, 1971) 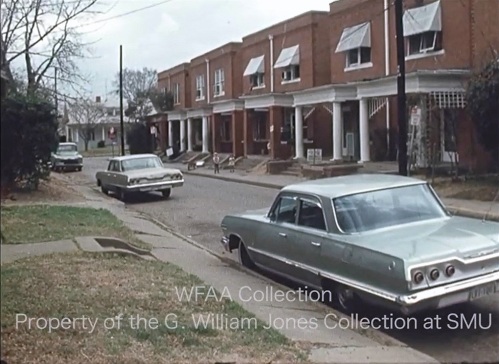 I posted another mystery image just yesterday, and it was identified in minutes by Jim P. This shows the Southwestern Bell Telephone Federal Exchange Office at 2400 S. Westmoreland. Thank you, Jim! (Apr. 18-19, 1971) 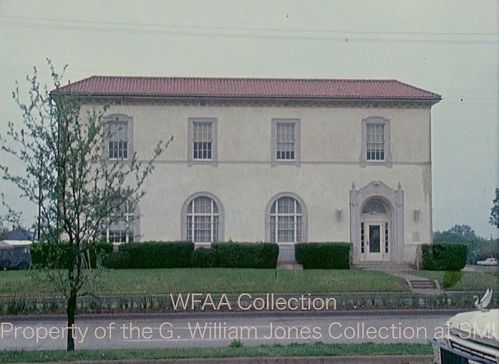 This could go on for days. And it DOES! Check out the SMU Jones Film YouTube page. There’s a lot of stuff there, and new stuff is posted daily. I personally have dealt with only about a year and a half of this collection (so far, 1970 and the first few months of 1971). There’s so much that I haven’t seen yet, and I look forward to finding out what’s there (…except for all the sports and Commissioners Court meetings…). 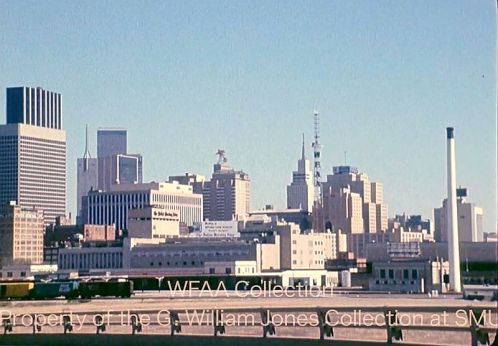