Getting ready for the big day, polishing her broom… (click for larger image)

Before Karl Hoefle entered the consciousness of most Dallasites with his fun phone book covers, he was a hard-working commercial artist. This 1955 Halloween-themed drawing was done for a magazine cover, and, like those phone book covers, he rewards the observant viewer with lots of little jokes. It might help to zoom in and look at some of the details.

The first one is a little fuzzy, but the calendar is from the A-1 Witchcraft Supply House: “Everything for the discriminating witch. See the all-new ’56 jet broom with ‘floating ride.'” 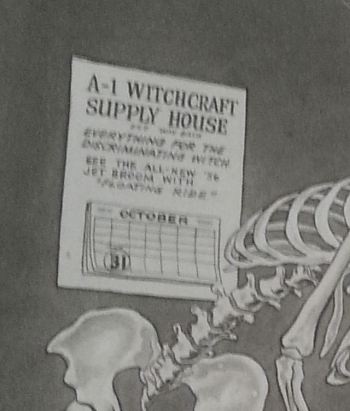 The witch has some handy-dandy Bonson’s Broom Polish (“with added anti-sliver compound”).

Her bookshelf contains works such as My Ghoul in Life, the Encyclopedia of Witchcraft (Standard Revised Edition), and Haunting Melodies. And the smiling ghost portrait adds a nice homey touch. 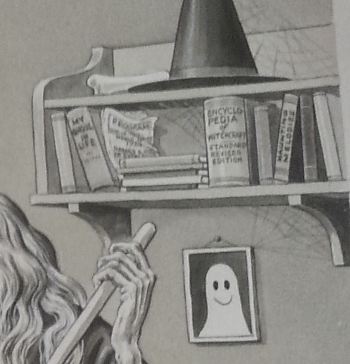 A crumpled-up note on the floor reads “Call Merlin.” 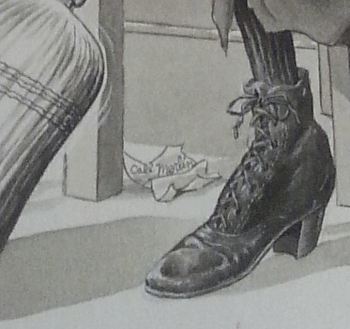 Mice are scaring each other, and the V8 Jet Broom appears to be revving. 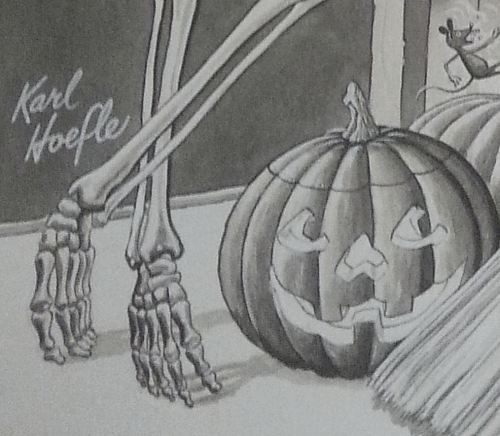 This illustration by Karl Hoefle was drawn for the September-October, 1955 issue of Among Ourselves, a local publication for the Pollock Paper Corporation Employees. I found this image in an old post on the website of the fab establishment in Lakewood, Curiosities. The post from 2014 is here — it includes two more Among Ourselves covers by Hoefle.

All pictures are larger when clicked/tapped.

(While searching for a Halloween advertisement, I unexpectedly came across reports of a federal grand jury case brought against Dallas-based Dr Pepper for violating strict wartime sugar-rationing. Scroll down to read about the legal case.)

Happy Halloween! Might I propose an eye-catching party suggestion? The “Frosty-Pepper Pumpkin”! Hollow out a pumpkin, fill it with cracked ice, and load it up with bottles of Dr Pepper. Voilà!

Smart, original; more decorative and eye appealing than a bowl of giant ‘mums. Fashion this “Frosty-Pepper” Pumpkin and serve as photo shows. Pre-chill bottles and bury deep in cracked ice. Dr. Pepper! So keen, so cold, so sparklingly alive! A smart lift for active people. ‘Twill add zest to your buffet foods … add laurels to your “rep” as a clever hostess. Keep plenty in your home refrigerator … for party hospitality … for good cheer and a quick lift, at 10, 2 and 4 o’clock, or anytime you’re hungry, thirsty or tired.

NOTE: Dr Pepper availability in a few markets has been delayed by continuing shortages. These will be opened by new, franchised Dr. Pepper bottling plants as rapidly as supplies will permit.

“Darts for Dough”? I had to look that up. It was a radio game show involving quizzes and dart-throwing, created by Orval Anderson and Bert Mitchell at WFAA radio. It debuted in the summer of 1943 as a strictly local program, but it’s popularity was such that it moved to Hollywood in August, 1944 and — still run by the WFAA creators — it began to be broadcast “coast to coast” for several years, moving to television by 1950. It was originally developed in Dallas as a sponsorship vehicle for Dallas-based Dr Pepper and was frequently advertised as “Darts for Dough — The Dr Pepper Show.”

1947 was a big year for Dr Pepper — that was the year their beautiful (and sorely missed) plant opened at Mockingbird and Greenville.

1947 was also a noteworthy year for the company, because of a large federal grand jury indictment which charged several corporations and individuals — including Dr Pepper and some of its bottlers and employees — with sugar-rationing violations (these “irregularities” appear to have begun in the last months of World War II, when wartime food rationing was still serious business). Black-market sugar! A district representative of Dr Pepper was assessed a small fine, but charges of conspiring to violate sugar-rationing regulations which were brought against the DP parent-company were ultimately dismissed, a ruling which angered Federal Judge Alfred P. Murrah, who seems to have been extremely unhappy about the dismissals, as can be read in his blistering statement below.

Two of the individuals charged in the case — New Mexico residents — received prison sentences in what was described as “the largest black market sugar operation on record,” involving over a million pounds of sugar.

This “Happy Halloween!” post took a bit of an unexpected dark detour. Let’s cleanse our palate with something happier: another party idea with Dr Pepper and a hollowed-out pumpkin (found on eBay).

More Halloween posts from Flashback Dallas can be found here.

Dunking For Apples at a Halloween Night “Spooks’ Party” 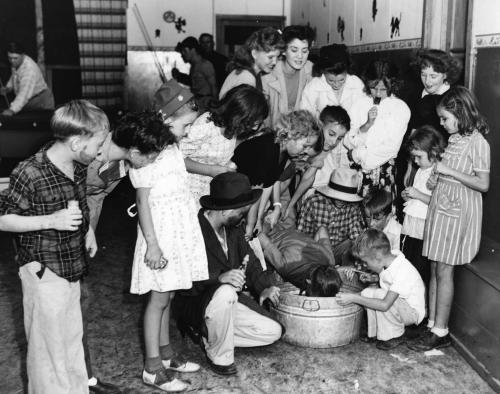 Kids used to really have to WORK for those treats!

In an effort to steer young revelers to safe Halloween festivities, the Dallas Park and Recreation Department organized parties in community centers around Dallas in the 1930s and ’40s. One of those parties (in an unidentified location) can be seen above, in a photograph titled “Dunking for Apples — Hallowe’en Night — October 31 at Spooks Party.”

The party’s apple-bobbing is in full swing. All eyes are on the dunker, who has obviously been hard at work, dunking down well past his shoulders. A couple of young hobos appear to be in attendance, both with prominent five o’clock shadows. Even though the party is for children, the adults seem to be having more fun than the kids, but perhaps this is early in the evening. And the party’s not just for the small-fry — there’s a pool game going on in the background, providing dunk-free entertainment for dads (and other men who might have wandered in).

This photograph comes from the Dallas Municipal Archives, accessed through the Portal to Texas History, here. The photographer is Harry Bennett. The photo is undated, but it looks like it is from the early 1940s. These city-sponsored parties appear to have started in the late-1930s as a way to keep children out of mischief and away from the riotous celebrations downtown (which I wrote about previously, here).

More Halloween photos from the Dallas Park and Recreation Department collection, taken by Harry Bennett — perhaps taken the same year, perhaps at the same location — can be seen here.

When Halloween In Dallas Was Mostly “Trick” and Very Little “Treat”

Dallas used to have some pretty bad Halloweens. Way more “trick” than “treat.” The word “riot” was used frequently to describe the typical Halloween night goings-on, when thousands of people clustered downtown and did unsavory things (such as drinking, fighting, pick-pocketing, mugging, and being generally obnoxious), while out in the “suburbs” (meaning far-flung locales such as East Dallas and Oak Lawn), marauding bands of young “pranksters” were keeping themselves busy breaking things and setting things on fire. Like kids do. Each Halloween, every policeman was called in for duty — only those in their sickbeds were exempt.

The worst of these Halloweens seemed to happen in the 1930s. Elm, Main, and Commerce, between Lamar and Harwood, were cordoned off from traffic. This is where upwards of 25,000 revelers would slowly cruise up and down the streets, causing mayhem and inflicting occasional bodily injury (much like the notorious Texas-OU weekends of later years). Even though the area was off-limits to automobile traffic, the streetcars still ran, and the poor drivers must have dreaded that night each year and steeled themselves for the worst, as if heading into battle.

Apparently Dallas revelers had a signature tradition, and it was to carry large wooden paddles — sometimes as large as canoe oars — and to swat people in the crowd on their backsides, usually women. At some point women also began to carry paddles, and they did their fair share of swatting, too. It was a paddling free-for-all.

1935 was a particularly noteworthy year, as it was the first Halloween after the state of Texas had voted to repeal Prohibition. Yes, people were drinking. And paddling. Sounds like a bad combination.

Below is a list of just a few of the reported instances of vandalism and “high-spiritedness” which routinely plagued the city every Halloween:

In 1939, an intoxicated man who was “playfully threatening people with a knife” was playfully arrested.

In 1935, there was a huge mud-fight in Oak Lawn at Newton and Throckmorton which involved over 100 boys. Like greased pigs, an adrenaline-fueled, mud-encased 10-year old running from beleaguered and hopelessly out-numbered policemen — who, quite frankly, had bigger fish to fry that night — were almost impossible to catch. Spectators and passersby did not escape unscathed. Except for the dry cleaners the next day, Oak Lawn was not amused.

And in 1936, during the Texas Centennial, a policeman was suspended and demoted after an incident of “horseplay” at Parry and Exposition in which he had been shocking passing pedestrians by poking them with the end of a walking stick that had been hooked up to the battery of a police motorcycle. He got into trouble because one of his victims was a young woman who had been standing on wet pavement when the electrified stick touched her, resulting in a more-powerful-than-expected shock. She lost consciousness, fell to the ground, and hit her head on the sidewalk. Luckily, she recovered quickly and even requested that the officer not be punished, but the police chief was not so forgiving. He was understandably livid, especially when he discovered that a number of motorcycle cops had been doing the same thing. One imagines there were several new orifices opened up amongst the force in the days that followed.

But the pièce de résistance was in 1920 when several boys “anchored a block and tackle around a two-story house in Cockrell Hill and hoisted a wagon and a team of terrified mules up in the air” (DMN, Oct. 27, 1963). That right there required impressive organizational planning and a certain amount of entry-level engineering skill.

Eventually things settled down. By 1949 officials had finally put an end to the swarming, surging masses downtown. People began to celebrate Halloween with candy and costumes and haunted houses and parties. In 1966, a policeman was asked if things had improved from those earlier dark days:

There’s been an extensive change for the better in recent years. Police almost never get a call to let a cow out of a school house anymore. (DMN, Oct. 27, 1966)

And Halloween became more “treat” than “trick.” Good news for the City of Dallas. And for its mules. Bad news for the makers of Ivory soap and thick wooden paddles.

Selected tidbits gleaned from the frenzied coverage in The Dallas Morning News archives:

Other Flashback Dallas posts on Halloween can be found here and here.

Halloween Isn’t Only About the Candy 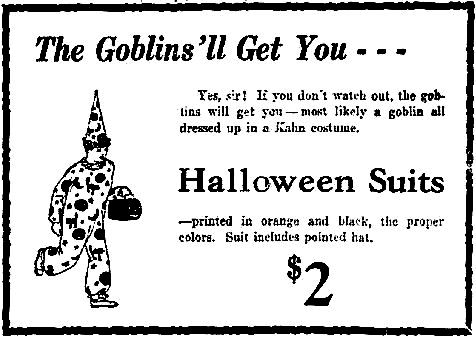 A few Halloween ads from the 1920s. The top ad for a snazzy “Halloween suit” is something of a whimsical departure for the legendary men’s clothing store, E. M. Kahn (est. 1872): it was an advertisement for children’s Halloween costumes — “printed in orange and black, the proper colors.” (I’d snap it up, kid — for two bucks, it’s the cheapest thing you’re ever going to find at E. M. Kahn.) “Suit includes pointed hat.”

But Halloween isn’t just for kids. Below, a Reynolds Penland ad for adult costumes, which include skeleton, devil, and “whoopee” suits. No pointed hats, but there are accessories — just look at those shoes!

And lastly, an ad for glass cleaner. Dallas had a MAJOR problem with unruly “goblins” soaping windows — especially downtown — and this product probably came in pretty handy on “the morning after.” I bet this was the busiest time of the year for the C-It Liquid Glass Cleaner company — their make-it or break-it sales period. Halloween might well have been their Black Friday. …Or rather their Orange and Black Friday (because those are the “proper colors”).