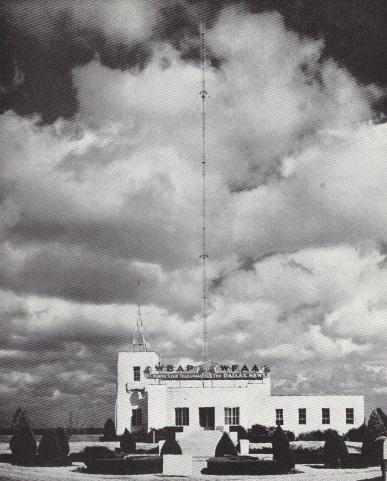 I’ll link to a story that fully explains this extraordinary arrangement, but, briefly, WFAA and WBAP both broadcast on two frequencies, trading off throughout the day. A typical schedule looked like this: 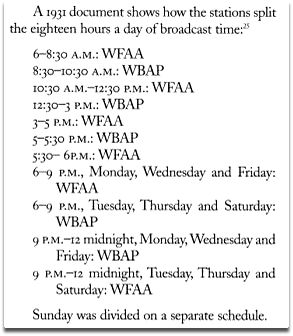 The two frequencies were 570 and 800 (later 820) kilohertz on the AM band. When WFAA was broadcasting on 570, WBAP was broadcasting on 820. On the agreed-upon time, the stations would switch over to the other frequency. Back and forth. Over and over and over. All day long. They were independent stations with independent programming, network affiliations, on-air talent, and advertising departments. And this went on for FORTY-ONE YEARS! Until 1970! How had I never heard of this?

Apparently it wasn’t all that big a deal to the stations or the listeners. Things were getting a little strained by 1969, though, when WBAP went whole-hog into playing country music (and eventually became one of the most successful country stations in the United States). It was time to go their own ways. The split was amicable, and both stations felt that the unusual partnership had worked well for all concerned.

So why did this happen in the first place? Because of the 820 frequency. 820 was a clear channel frequency, which meant that the station that owned it could broadcast at an incredible 50,000 watts — enough to be heard all over the Western hemisphere; 570 boasted a measly 5,000 watts, and, as someone said, “people might hear you in Sherman … but maybe not.” Neither WFAA or WBAP wanted to give up the clear channel powerhouse, which is why their piggy-backing partnership lasted as long as it did. But, ultimately, WBAP got 820 and was a major broadcasting force to be reckoned with. WFAA radio got the short end of the stick and sputtered along at 570 on the AM dial for a few lackluster years but never recovered from losing its half-share of 820 AM. In the WFAA-WBAP showdown: Fort Worth 1, Dallas 0.

Look at this crazy billboard from 1963 — it flashed which frequency WFAA was currently broadcasting on.

Photo of the transmitter building from WFAA, WBAP, KGKO Combined Family Album (Dallas-Fort Worth, 1941). Yes, there was actually a THIRD station involved in all of this for a while — KGKO out of Wichita Falls! Here’s an ad from the 1941-42 Texas Almanac, via the Portal to Texas History (click to see a larger image):

Sample schedule is from the definitive article on this bizarre broadcasting alliance: “You Have Half a Station, We Have Half a Station” — How WFAA in Dallas and WBAP in Fort Worth Shared Radio Frequencies for Four Decades by John Mark Dempsey, from the Spring, 1999 issue of Legacies magazine, which can and SHOULD be read, here.

For another photo of this transmitter building, see a previous post here.