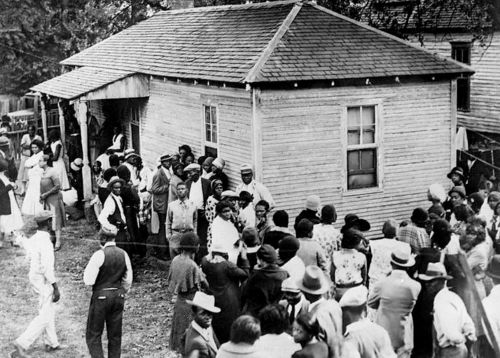 Waiting for a message from God (click for much larger image)

In the winter of 1931, a woman named Hattie Henderson made news when a “vision” appeared on her window shade twice a day. She interpreted the image — which was formed by shadows cast by the sun streaming through her window onto the shade — as a warning from God that “war, pestilence and other calamity” were on their way to wreak havoc. Word of the “miracle window” spread throughout the community, and soon thousands of people were flocking to the little house on Campbell Street to see the vision for themselves.

More than a thousand curious and devout negroes, and a sprinkling of whites, congregated Tuesday afternoon at 3504 Campbell street, near the Greenwood Cemetery, in North Dallas, to witness the miraculous appearance of images on a drawn window shade. […] Sister Hattie Henderson, whose husband is a preacher in the Holiness Church, reports the images have been appearing twice daily, at 8 a.m. and 2:45 p.m. each day since Oct. 19. She firmly believes they are divine warnings. (DMN, Nov. 11, 1931) 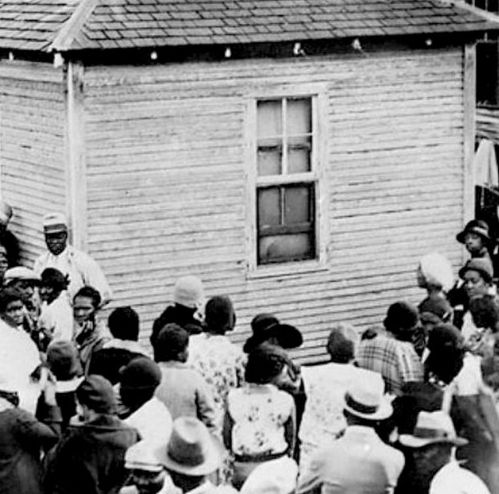 Campbell St. is a short street that runs between the Jewish section of Greenwood Cemetery and the Freedman’s Memorial Cemetery. In 1931 it was in the large African-American community of “North Dallas.” The scene in the photograph took place in what is now a Walmart parking lot in the heart of “Uptown.”

Photo by an uncredited photographer, ©Underwood & Underwood/Corbis; found on the Corbis website.

Read more about this in the Dallas Morning News archives in the story “Thousand Negroes Gather to View in Awe Warning Miracle in House Near Cemetery” (DMN, Nov. 11, 1931).

Map — with location of sacred window shade circled in red — from Google Maps.