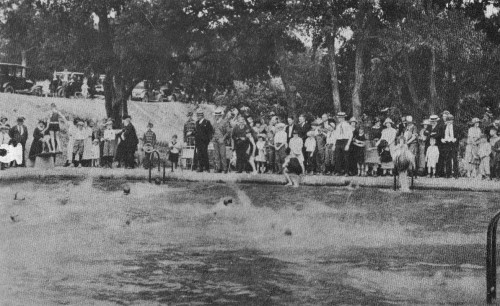 Even though “municipal pool” and “Park Cities” don’t really seem to belong in a sentence together, the still-going-strong pool in Highland Park is over 90 years old. The photo above shows crowds gathered at the formal opening of the brand new Highland Park swimming pool, dedicated on May 17, 1924. The caption of this photo which ran in The Dallas Morning News on May 18, 1924 reads: “The above shows the group of Highland Park citizens gathered at the new municipal swimming pool Saturday afternoon for the formal opening exercises. Mayor Frank M. Smith is seen standing in the middle of the group. Seated by his side is former mayor Henry L. Davis in whose administration the movement for the installation of the pool was started.”

Oh, to have witnessed the fabulously wealthy (or near-fabulously wealthy) sashaying down the street toward the pool, dressed in their mandated bathrobes and swimsuits. Or their raincoats and swimsuits. (“[Regulations governing use of the pool require that] swimmers must dress at home in their bathing suits, but may come through the streets to the pool so clad if they wear a raincoat or a bathrobe over their swimming garb.” — Dallas Morning News, May 18, 1924)

The municipal pool is in Davis Park on the south side of Lexington Avenue, in the “natural amphitheater” between St. Johns and Drexel. The 50 x 100-foot pool (reduced somewhere along the way from the original plan of a 60 x 140-foot pool) cost about $10,000 when it was built with municipal funds in 1924. The pool was very popular amongst Highland Park residents, and, as can be seen in the photos, it was located in one of the prettiest settings in Dallas.

Photo is from a postcard issued as part of the Park Cities Bank “Heritage Series” in the 1970s; the credit line on the postcard reads “Donated by Mr. Burton Gilliland.” Thanks to the Lone Star Library Annex Facebook group for use of the image. (The printed description of the postcard has an incorrect date of 1923.)

More on the pool’s opening can be found in the Dallas Morning News article “Highland Park Pool Dedicated Saturday” (May 18, 1924).

Official site of the HP pool? Here it is.