Official SFOT-produced movie (via Texas Archive of the Moving Image)

TAMI — Texas Archive of the Moving Image — is a great repository of old films shot in and around Texas. Its site boasts streaming newsreels, PSAs, commercials, home movies, etc. — one of these films is the 11-minute short “A Day at the State Fair,” an “official” film produced by the Jameson Film Co. of Dallas for the State Fair of Texas, directed by Curt Beck and starring two young local actors, Charmayne Smith and Harry Bleeker. The SFOT made these short movies primarily to promote the fair, and they were often shown in theaters around Texas and in neighboring states, sandwiched between other cinematic entertainment. They were also used for educational purposes and were shown to both students and civic groups. This official film was shot at the 1941 state fair for the purpose of promoting the fair the next year, but it may actually never have been shown anywhere, as the 1942 State Fair of Texas was cancelled “due to war.”

I am unable to embed the film here — to view it in its entirety on the TAMI site, click here. (Make sure to click the “full screen” square just to the left of the speaker icon below the frame.)

Below are some (admittedly grainy) screenshots from the film. It’s fun to see these pre-War shots of the fair in color (inconsistent though that color is). Click pictures for larger images.

The film follows two young people who meet on a blind date and tour the fair. The young woman was played by Charmayne Smith, a Forest High School graduate who became both Miss Dallas and Miss Texas, and, at the time of this film, was studying acting at the Dallas Little Theater.

Her date was played by Harry Bleeker, also an actor with the Dallas Little Theater. (I like the peek at Parry Ave. in the background.)

They “met cute” at a Fair Park bench.

They went to the Midway.

They looked at rides and made pithy observations. 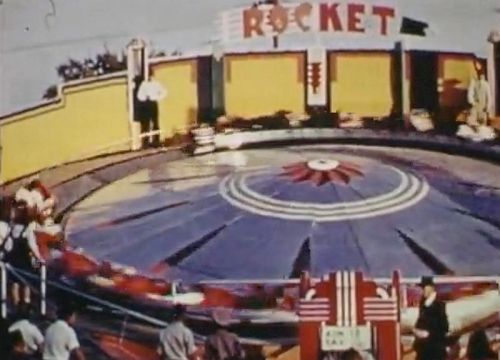 They bought tickets to an “aeroplane” ride, a ride so exciting it made Charmayne go “Whee!” 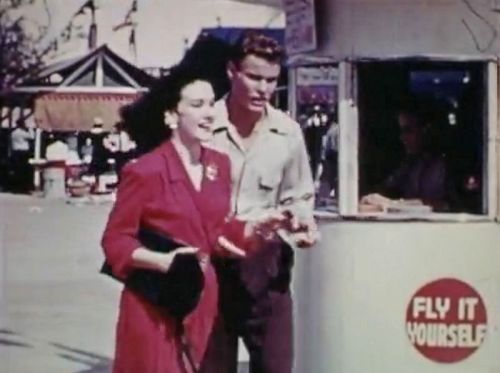 They listened to a freak show barker.

Which, the closer you got, didn’t look all that freak-filled, unless you count the sight of a sullen girl holding a snake as being terribly “strange and unusual.” (I’m a sucker for sideshow banners, and this was my favorite shot of the film. The man in the crowd who has turned around to face the camera is more unsettling than anything on that stage — including the accordion!) 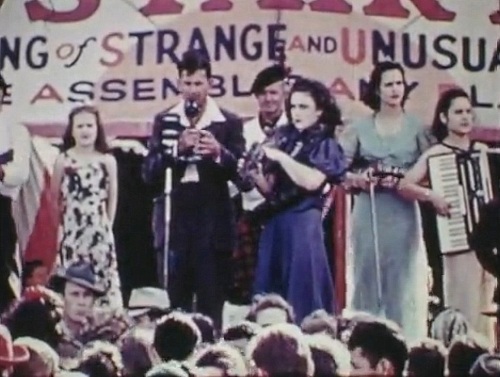 Harry and Charmayne went in and out of buildings, looked at different exhibits, rattled off facts-a-plenty, and extolled the greatness of Texas. And no way were they going to miss the livestock events. A state fair’s gotta have livestock. Like this almost perfectly rectangular Beef Shorthorn.

And these parading Herefords. 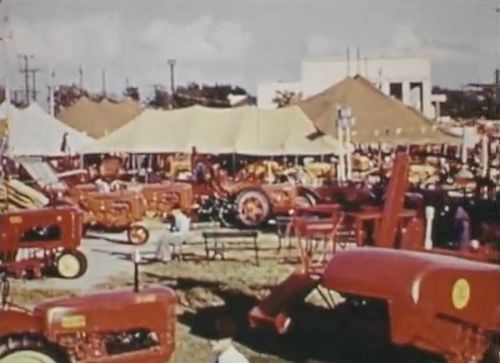 They took in a “petroleum exhibit” and exclaimed how fabulous it was. (In real life, Charmayne Smith and Harry Bleeker and other Dallas Little Theater actors were part of this exhibit during the 1941 fair.) If only this little car were real and had been seen at the automobile show!

They moseyed through the Dallas Museum of Fine Arts and viewed the art in the Texas General Exhibition. (Eugene Trentham’s cloud-filled painting, “August Landscape” — winner of the year’s top prize —  can be seen here.)

Then, tuckered out, Charmayne tells Harry it’s probably time that she should head home. Harry offers to drive her home and suggests they return that night for more fair fun!

They leave, happy, headed for Parry Ave. (and, perhaps, whiskey, across the street).

This wasn’t all that Harry and Charmayne saw. There was also a monkey, goats, sheep, horses, the Ice Capades, a beauty contest, jars and jars of preserved fruit, a lady handing out Hi-Ho crackers, the Hall of State, and more. Watch the film. It’s great to see 70-plus-year-old footage of Fair Park — and it’s also nice to hear people talk with Texas accents (something getting rarer every day in Dallas). Again, you can watch the film here.

The TAMI home page is here; the page featuring this short film is here. Thank you, TAMI, for uploading and sharing this and all the other cool stuff on your site! (The film is currently identified as being made in 1939, but everything points to this being filmed at the 1941 State Fair of Texas.)

These SFOT-produced films were an important promotional tool to entice visitors to the fair. In the months leading up to the opening of the SFOT, these films were shown in hundreds of Texas movie theaters, in theaters in contiguous states, and in thousands of schools throughout the Southwest.

Charmayne Smith (1921-1965) entered and won a lot of beauty contests while in high school and during her time at both the University of Texas and at SMU. An Oct. 12, 1941 captioned photo of Miss Smith mentions that she had been participating in the filming of (color) footage shot around the 1941 SFOT which would be used “for educational and promotion purposes before next year’s exposition.”

I was unable to find anything about Harry Bleeker, other than a mention in a 1941 Dallas Morning News article about the petroleum exhibit seen in the film. Chances are pretty high he served in World War II.

In the film, Charmayne and Harry visit the Third Texas General Exhibition (1941) at the Dallas Museum of Fine Arts. The grand prize in the oil painting division went to Eugene Trentham, a UT art instructor at the time, fresh off a Guggenheim Fellowship.