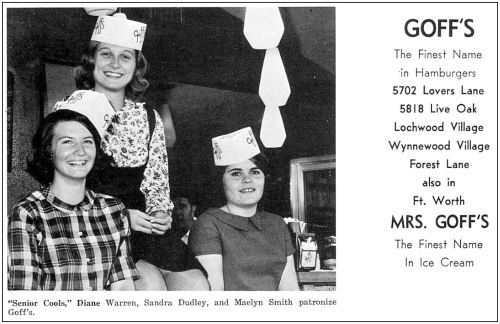 Yesterday I posted photos from the 1966 Highland Park High School Highlander yearbook — today I’m posting a lot of ads from the same yearbook, many of which include students posing at the businesses. Most of the ads are larger if you click them.

Above, Goff’s. My mother refused to patronize this establishment as the owner once said something disparaging about my shaggy-haired 10-year-old brother (Mr. Goff really didn’t like long hair on boys and men), so I’m one of the few native-born Dallasites who never had a Goff’s hamburger.

On the other hand, I enjoyed a lot of Ashburn’s Ice Cream as a kid — the locations on Knox and on Skillman. I can’t remember ever getting anything other than Butter Pecan.

M. E. Moses, Snider Plaza. I didn’t grow up in the Park Cities, but my parents both went to SMU and my mother worked in University Park for several years, so I spent a lot of time as a kid wandering around HP Village and Snider Plaza as a kid. And what kid didn’t love a dime store? I can remember where everything was at that Moses. The memory of that ramp between what I always thought of the “sunny side” of the store and the cave-like dark side of the store is a weird, fond memory. (For some reason I never imagined there was actually a person named “M. E. Moses.”) 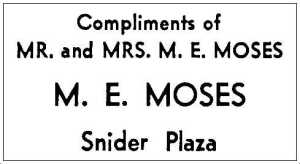 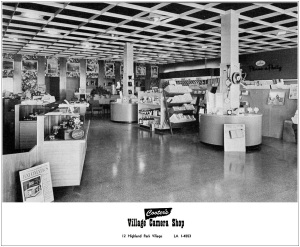 Preston State Bank. I know that PSB was very early entering the credit card market — I remember my parents had a Presto-Charge card — but I’d never heard of this “Presteen” checking account geared to teenagers. 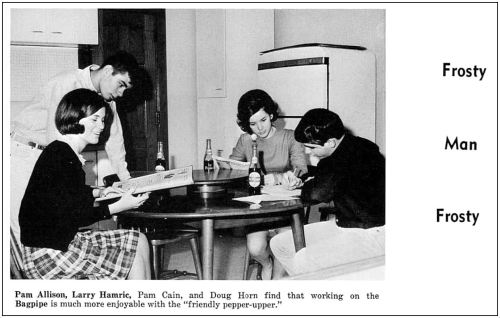 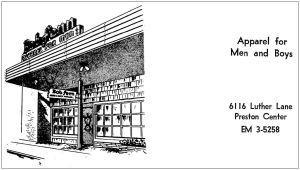 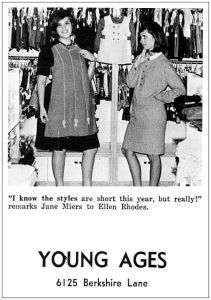 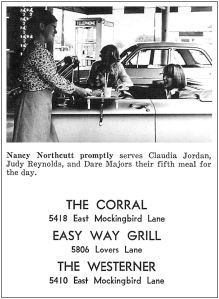 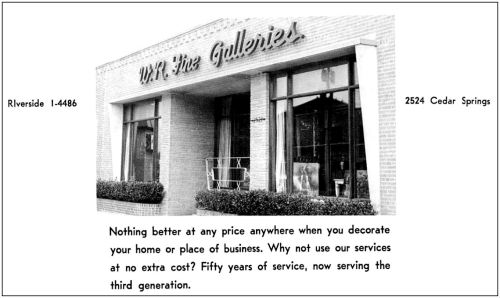 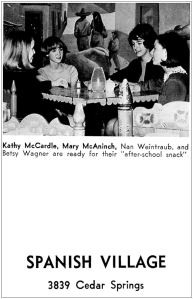 Johnson Brothers Chevrolet. The daughter of one of the brothers was a close friend of my mother’s, and I remember visiting her parents’ house on St. Andrews  several times — that huge yard was pretty magical to me as a little girl. 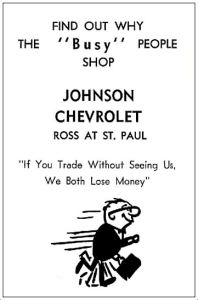 The Gondolier, 77 Highland Park Village. This photo was split across two pages, but I tried to piece it back together because this is a view you don’t see that often in a photo of Highland Park Village, looking east toward Preston. The space is currently occupied by Mi Cocina — see a similar view today, here. 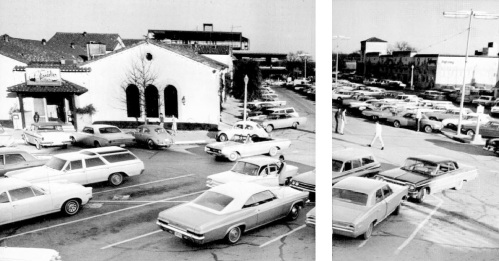 NorthPark without the Melody Shop is like a day without sunshine. 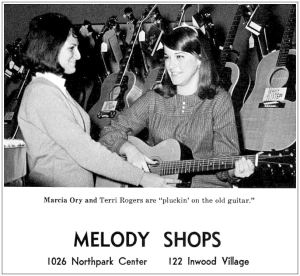 Speaking of music, here are a couple of ads placed by teen bands, something I’d never seen before — but what better way to market your band than to advertise in a high school yearbook?

After the Beatles first appeared on “The Ed Sullivan Show” in 1964, a million garage bands sprang up overnight. “Battle of the Bands” contests were ubiquitous. The two Dallas bands that had ads in the 1966 Highlander played all over town and participated in a few of these contests.

And the Outcasts (not to be confused with the cult-favorite garage band of the same name from San Antonio): Gary, Donny, David, Jim, and Wally. Dig that groovy background!

All ads are from the 1966 Highland Park High School Highlander yearbook.

The companion post — “Highland Park High School: Photos from the 1966 Yearbook” — can be found here.