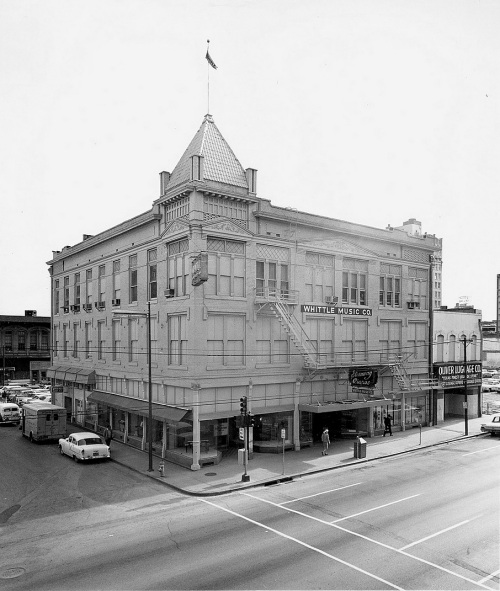 Above, the very attractive home of the Whittle Music Co., which sat at 1108 Elm Street on the southwest corner of Elm and Murphy. It was built as a two-story building in 1892 for the A. Harris Co., one of Dallas’ earliest department stores. A third floor was added in 1899. A. Harris Co. eventually outgrew the building, and, around 1914, it moved into several floors of the Kirby Building. In August, 1941, the Whittle Music Co. moved in from their previous nearby location. The company which sold “everything musical” (instruments, radios, phonographs, records, sheet music, etc.) was happy to move into the larger building, which included a basement, an auditorium for performances, meetings, and recitals, and several large display windows to better feature their large selection of pianos (the building was apparently the first store in Dallas designed to include large windows in which to prominently display merchandise to passersby).

D. L. Whittle (1879-1970) came to Dallas in 1912 and was involved in several businesses (including selling Wurlitzer pipe organs and co-owning the Crystal Theater). He became president of Western Automatic Music Co. (which sold electric player pianos) and eventually changed the name to the D. L. Whittle Music Co. A few years later he sold the business to Howard Beasley who decided to keep the Whittle name. (See the 1968 Sam Acheson interview with Whittle at the bottom of this post for more information about Mr. Whittle and his memories of Dallas in the ‘teens.)

Whittle’s became one of Dallas’ premier music companies, selling instruments and recorded music, offering lessons, hosting performances, etc. According to a Dallas Morning News article by Kent Biffle, customers included Van Cliburn and Arthur Rubinstein, and “Al Jolson once sold tickets to one of his own shows” at the store’s ticket window (DMN, May 31, 1964).

Business was flourishing and all was going well, until the early 1960s when it was announced that the block the building was on (as well as other adjacent blocks) was set to be bulldozed to make way for the construction of One Main Place. Interestingly, Whittle’s and the Dallas, Texas Corp. (developers of One Main Place) agreed to a land swap: the music company would get land in Oak Lawn and a fancy new building built on it in exchange for the Elm Street property. Only after Whittle’s had taken occupancy of their new home would the 63-year-old building be demolished. (Seems like a pretty sweet deal for the Whittle company — perhaps the fact that D. L. Whittle was a major stockholder of the Texas Bank & Trust Co. — which had ties to the One Main Place project — was a factor.)

Whittle’s moved into its new location at 2733 Oak Lawn in March, 1965. Not only was it a nice new building, it also finally had “ample parking.” Whittle’s ceased operations sometime in … the ’80s? … but the George Dahl-designed building still stands, here.

I’ve never been a huge fan of One Main Place, but it was a VERY BIG DEAL in the late ’60s. It was envisioned as an entire complex — One Main Place, Two Main Place, and Three Main Place — but only one building was ever built. Yeah, we got another tall building out of the deal (the symbol of “dynamic growth!”), but the view of the attractive three-story building in the photo at the top of this post is, let’s face it, far more aesthetically pleasing than the same view today. Sorry, little building. I wish you’d survived.

Most images and clippings are larger when clicked. 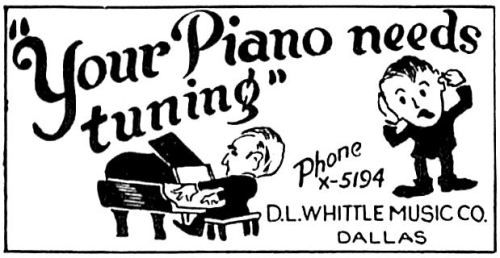 Original source of photo at top is unknown — I found it on Flickr, here. The Oliver Luggage Co. appears to have been a next-door neighbor for only a year or two, beginning in 1956.

I was one of thousands of school children who bought instruments and sheet music from Whittle’s on Oak Lawn. I always liked going into that cool building. I had no idea George Dahl designed it. It looks like the Dallas Historical Society has the Whittle Music Co. collection. You can see a ton of thumbnail images here. Here are a couple of those thumbnails blown up (apologies for the picture quality) — the Oak Lawn store: 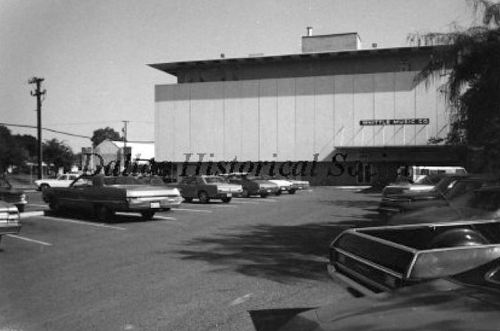