Top delegates of the NAACP regional conference in Dallas, 1950

The third annual NAACP Southwest Region Conference was held in Dallas, March 24-26, 1950. Above we see the top delegates (out of about 200 attendees), standing in front of the Salem Baptist Church, then located at 710 Bourbon in South Dallas. One of their main objectives was to increase NAACP membership in order to more effectively tackle issues of civil rights and social injustice.

The conference’s main speaker was special counsel to the NAACP, Thurgood Marshall. During the conference, he stated that, although there was slow and steady progress being made by African-Americans in American society, he did not expect to see racial segregation abolished in his lifetime. 17 years after this statement, Thurgood Marshall was appointed by President Lyndon Johnson to serve as a justice on the United States Supreme Court. 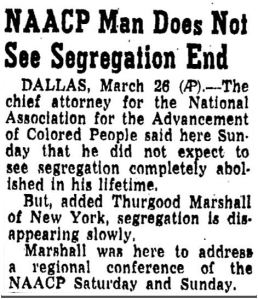 Below, the review of the conference that appeared in the April, 1950 issue of the NAACP magazine, The Crisis (click to see larger image).

Top photo from the June, 1950 issue of The Crisis, the magazine published by the NAACP. Many decades’ worth of scanned issues of the magazine are viewable via Google Books, here.

The Salem Baptist Church was, at the time of the photo above, located at 710 Bourbon in South Dallas. According to the church’s website, the church moved from that location in the early 1960s when the site was one of many purchased by the Texas Highway Department to be demolished for highway construction.