Below is an article (which reads like a real estate ad) from the December 29, 1887 edition of The Dallas Herald, rhapsodizing about the wonders of Oak Cliff, the brand new development springing up across the Trinity River, not yet part of Dallas. According to the article, “the Cliff” was quickly becoming a bedroom community for neighboring Big City Dallas, which was apparently bursting at the seams with newly-arrived residents looking for someplace to live. Accompanying this paean were six drawings (in varying degrees of artistic accomplishment), including an interesting, if hard-to-read, map of Oak Cliff at the time (all images are larger when clicked). Here is a transcription of the Dallas Herald article (which can be seen in its original layout on the Portal to Texas History website, here).

STILL BOOMING IN SPITE OF THE BAD WEATHER

Oak Cliff was born of natural advantages and abundant enterprise. Mother Dallas has a dozen sprightly children but in the face of all of them, Oak Cliff walks off with the schnap. There is some talk of moving Dallas over to the Cliff, but the city council will not do it. It would not be a good thing. “A city set on a hill cannot be hid.” 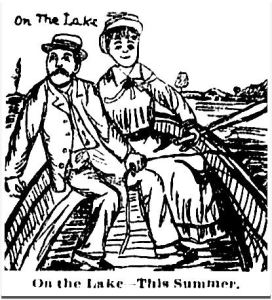 We don’t intend to say that Dallas is hid. The Cliff dwellers look down upon her as an open page every day. People from all sections of the state and county have turned both eyes toward Dallas, and her prominence is rapidly increasing. The growth of her population is marvelous. There are at least 2,000 recent arrivals living in tents around the city waiting for houses. Between three and five hundred of these are at Oak Cliff. It is certainly not necessary to add that the constantly increasing prominence and growth of Dallas rendered it necessary to cross the river and find desirable and delightful homes for the people. For a solution of this problem the reader is referred to the above illustration.

The dummy engine brought from the Crescent City for that purpose could not pull the people. So a new larger engine was brought on to try the track and haul the folks. From the court-house to Tenth street station there is one unbroken line of excellent track, except the break at the temporary bridge over the Trinity’s channel. The iron bridge is on the ground, the huge pillars are up and the material all ready for the one missing link, which will soon be completed.

The splendid pike leading from Commerce street west is the wagon way to Oak Cliff. This is macadamized from the bridge to Grand Avenue which is a fine graded and macadamized street running entirely through the heart of the new city. Limestone in blocks about a foot square is laid first upon the well graded street and this is finished off with a filling of excellent gravel, almost a foot deep. Leaving the Lancaster road near the bluff, you turn right and follow Grand avenue more than a mile without encountering enough mud to bog a mosquito. Of course other streets, fifty of them, have been graded also. So much for TRANSPORTATION. Good roads of both kinds to the city. 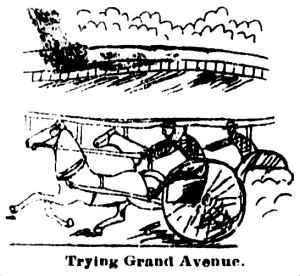 Now we are over there. The first thing we find its altitude. As Col. Oliver, editor of the Oak Cliff Weekly puts it, “we are much nearer heaven.” We feel better. Next we find beautiful scenery all around us for almost a weekday’s journey. The circle around us is broad and grand. We find pleasant groves, enchanting jungles, quiet retreats, hoary rocks, delightful springs and then the lake.

The water tower and school house are not hard to find. No city in the state has better. (School begins January 1st.)

A nobby little station after the Japanese plan of architecture, is found where each street crosses the railway. Scores of laborers are seen at work on the streets, and the saw and hammer keep up a terrible racket. There are thirteen homes now going up and as many more under contract. Scarcely a day passes without sales by the Dallas Land & Loan Co., as the lists of “Real Estate Transfers” attest. $200,000 will cover the real estate sales of most Texas towns of 5,000 people and under for six months or a year. Oak Cliff has sold that much in six weeks, and began virtually without any population at all. There has been more public improvement at Oak Cliff within the past three months than in the entire city of Dallas, or any city or town in Texas. This is a strong statement but it is backed by the figures. It is true. This improvement has been made by private capital too. It cannot stop now – it does not have to. But it is safe to say it does not wish to.

With such lovely places for home, school privileges, quick and cheap transportation to the city, highly improved streets and an abundance of as pure water as there is in Texas, the investors in Oak Cliff stock need not wait long for their bread to float back to them. But the point of chief interest has not been touched yet. THESE PLEASANT, HEALTHFUL, CONVENIENT PLACES TO LIVE ARE OFFERED AT REASONABLE PRICES. It takes more than most mortals possess to buy a 25 x 75 foot lot of black mud in other places and nothing is left to buy lumber or build a house. You do not need a fortune to get you a home at the Cliff, and you get a lot 100 x 250 or larger, in some instances. Of course you have no city tax to pay. Property will never be lower than it is now. The completion of the iron bridge will be sure to raise the value of lots. (–Dallas Herald, December 29, 1887)

Text and drawings from the pages of The Dallas Herald, Dec. 29, 1887; the original page layout can be viewed on UNT’s Portal to Texas History site here.

Other Flashback Dallas posts on the early days of Oak Cliff:

General posts on Oak Cliff/West Dallas can be found here.