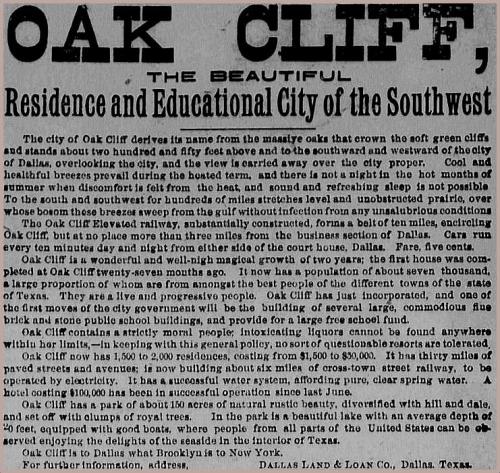 Oak Cliff and the whole “Brooklyn” comparison is not a new one. Developers were using it to lure people to the “soft green cliffs” of the newly-incorporated area where “there is not a night in the hot months of summer when discomfort is felt from the heat” and where “people from all parts of the United States can be observed enjoying the delights of the seaside in the interior of Texas.” A veritable paradise. Just like Brooklyn.

Hats off to the enthusiastic scribe who penned this incredibly wordy advertisement beckoning the “live and progressive” readership of The Southern Mercury to invest in the ground-floor of Dallas’ Brooklyn.

OAK CLIFF, THE BEAUTIFUL RESIDENCE AND EDUCATIONAL CITY OF THE SOUTHWEST

The city of Oak Cliff derives its name from the massive oaks that crown the soft green cliffs and stands about two hundred and fifty feet above and to the southward and westward of the city of Dallas, overlooking the city, and the view is carried away over the city proper. Cool and healthful breezes prevail during the heated term, and there is not a night in the hot months of summer when discomfort is felt from the heat, and sound and refreshing sleep is not possible. To the south and southwest for hundreds of miles stretches level and unobstructed prairie, over whose bosom these breezes sweep from the gulf without infection from any unsalubrious conditions.

The Oak Cliff Elevated railway, substantially constructed, forms a belt of ten miles, encircling Oak Cliff, but at no place more than three miles from the business section of Dallas. Cars run every ten minutes day and night from either side of the court house, Dallas. Fare, five cents.

Oak Cliff is a wonderful and well-nigh magical growth of two years; the first house was completed at Oak Cliff twenty-seven months ago. It now has a population of about seven thousand, a large proportion of whom are from amongst the best people of the different towns of the state of Texas. They are a live and progressive people. Oak Cliff has just incorporated, and one of the first moves of the city government will be the building of several large, commodious fine brick and stone public school buildings, and provide for a large free school fund.

Oak Cliff contains a strictly moral people; intoxicating liquors cannot be found anywhere within her limits, – in keeping with this general policy, no sort of questionable resorts are tolerated.

Oak Cliff now has 1,500 to 2,000 residences, costing from $1,500 to $50,000. It has thirty miles of paved streets and avenues; is now building about six miles of cross-town street railway, to be operated by electricity. It has a successful water system, affording pure, clear spring water. A hotel costing $100,000 has been in successful operation since last June.

Oak Cliff has a park of about 150 acres of natural rustic beauty, diversified with hill and dale, and set off with clumps of royal trees. In the park is a beautiful lake with an average depth of 20 feet, equipped with good boats, where people from all parts of the United States can be observed enjoying the delights of the seaside in the interior of Texas.

Oak Cliff is to Dallas what Brooklyn is to New York.

A previous come-on from the developers of Oak Cliff can be found here.