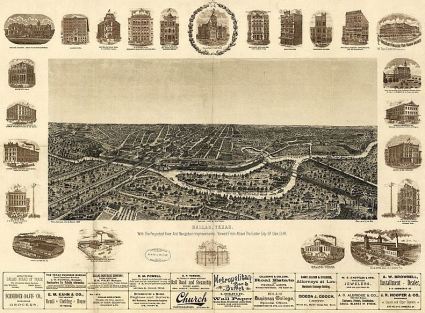 Above is a map titled “Dallas, Texas, With The Projected River And Navigation Improvements. Viewed From Above The Sister City of Oak Cliff.” It was a bird’s-eye view of the city drawn in 1892 by Dallas resident and businessman Paul Giraud.

If you click on the picture you will see a very large image which will allow you to look at all the tiny details. You’ll see a lot of stuff that never actually existed in Dallas, but which Giraud — an adamant and tireless proponent of a navigable Trinity waterway — hoped would become part of Dallas. It’s pretty cool and a lot of fun to wander through. (A good background history on Giraud’s “map” can be found on the Amon Carter Museum website here.)

Born in France in 1844, Paul Giraud settled in Dallas in 1890 where he worked both in real estate and as a draftsman while also acting as a booster of Dallas and Texas to anyone who would listen, especially to Europeans and fellow Frenchmen who were considering the possibility of emigrating to the United States. He was also an inventor and secured at least one patent.

Giraud’s enthusiasm and dedication for the Trinity River scheme could be found in the bird’s-eye view seen above, in a miniature three-dimensional model with working locks and dams which he constructed for the 1892 State Fair, and in newspaper articles printed across the state which he wrote to assure readers (and investors) of the feasibility of the project.

All that work, but, sadly, Giraud’s dream was never realized — the Trinity won. But he did leave us with that fantastic, partially realistic bird’s-eye view of the city. 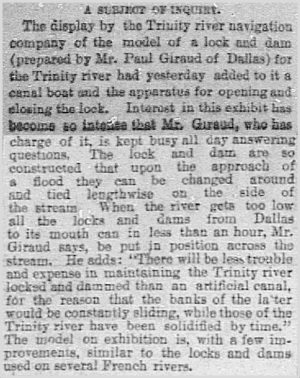 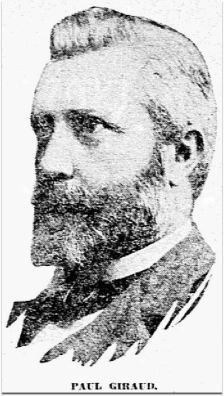 This map is in the collection of the Library of Congress, here; the picture at the top of this post links to the enlarged Wikimedia image here.

If you’d like to compare some of the buildings with Sanborn maps to see what was real and what was fanciful, you can find the 1892 Sanborn maps here (scroll down). It might be helpful to use Sheet 1 as a guide — if, for instance, you want to look at the area in the immediate vicinity of the courthouse (which was under construction at the time…), you see that you need Sheet 3, so you click on “Dallas 1892 Sheet 3” on the list of maps.