2020 is, without question, one of the worst years most of us have experienced. COVID-19 has turned our lives upside down and, for many of us, has left us mourning the loss of family, friends, and economic stability. 2021 cannot come too soon.

I wrote 62 new Flashback Dallas posts this year, which is surprising — I thought it was a lot less. I guess I wasn’t quite as much of a slug as I felt. Looking back over a previous year’s output is always a little amazing — when did I ever have time to write that much? A lot was covered in 2020, and I enjoyed all of it.

Below are my favorite posts of 2020 — those I particularly enjoyed researching and writing. I learned something with every post. I hope readers enjoyed some of these as much as I did. (Pictures are larger when clicked — read the original posts by clicking the title.)

This is my favorite post of the past year — and it’s from all the way back in January, which seems like a lifetime ago. When I stumbled across the photo seen above I was pretty excited — especially because this was in the part of Dallas I had grown up in (and was half a block away from where I had once had a bookstore). And what Dallasite isn’t familiar with Greenville Avenue? I had never heard of the “Angelus Arcade” (built in 1923) or even the name of that general Lowest Greenville neighborhood, “Bel-Vick” (for “Belmont” and “Vickery Place”). The arcade was revamped in 1927 to include a new movie theater — the Arcadia —  but before the 1930s, that bit of Greenville had been completely unknown to me. That photo sent me on a lengthy research road, which had me discovering things I had never known about a part of town I was very familiar with. I loved writing this post!

I can’t even remember how I found this unbelievably fantastic Frank Rogers photograph of the wedge-shaped building most people know as the old KLIF studios on Commerce Street. I could seriously look at this photo all day long. It is so rich in detail that I zoomed in to check out the various elements and backgrounds and architectural doodads, and that one great photo turned into a post filled with five equally great detailed-filled closeups. I’ve always loved this (still-standing!) building, and I had no idea it was so old — it hit the century mark this year. In researching this building, I came away with a greater appreciation for this part of the city where downtown begins to peter out before it blooms into Deep Ellum — or, conversely, where the city begins its quick and steady ascent to the major metropolitan density of the Central Business District.

This year COVID derailed the State Fair of Texas for the first time since WWII, and my SFOT posts were almost non-existent this year — this was one of them, and it’s another case of excitedly stumbling across something I was surprised I had never come across before. I don’t know anything about this weirdly futuristic vision of Dallas architect George L. Dahl, the man who led the Art Deco-inspired Texas Centennial design of Fair Park, but this drawing is pretty incredible. Frustratingly, I couldn’t find anything about this giant star-shaped entrance to Fair Park — it might just have been the result of whimsical brainstorming — but imagine if this had been built! I’ve found only one image of this, and the resolution is pretty poor. But I love the idea of this so much that my estimation of Dahl is higher than it was before (and it was already pretty high!). I loved researching this, even though my efforts were largely unsatisfying — except for the discovery that plans for a million-dollar star-shaped building were actually warming up in the Centennial bullpen, similar to a crazy, much-maligned “Texas Building” at the 1904 St. Louis World’s Fair — and hurtling off on this unexpected historical tangent was almost as good as learning about Dahl’s vision of a monumental Lone Star entrance to Fair Park. I loved writing this.

Finding this 104-page scanned booklet was probably the most exciting publication I came across all year. It is amazing. Crammed full of the sorts of photos and ephemeral information which too often disappear before finding their way to a safe haven of a historical archive. I highly encourage everyone to peruse this wonderful document of Dallas’ black community in the 1920s and ’30s. My three-part post was divided into schools, churches, and businesses and people. I loved researching these places and people. All thanks to the Tarrant County Black Historical and Genealogical Society who provided this important, fully-scanned resource to UNT’s Portal to Texas History.

I saw this photo in Troy Sherrod’s book Historic Dallas Theatres and wondered where this little shopping area and movie theater had been. After researching it a bit, I found that the shopping area was once known as Show Hill and was a lively hub of an African-American neighborhood in the Bottom/Bottoms area of Oak Cliff. I came across a wonderful oral history by longtime resident Margaret Benson who recalled growing up in the area in the 1940s and ’50s — it was a perfect accompaniment to the photo and added so much meat to the bone.

I had a bunch of photos of old houses I’d collected over the months and wondered what I could find out about them. I love researching old houses and buildings, and this was a fun project. The house below — one of the eight I was looking into — once stood on Lemmon Avenue, near Welborn. The horse is a nice touch.

For a few years I’d meant to write about the 19th-century Borich Sign Co. and its later 20th-century incarnation, Texlite (famous for creating the famed “Flying Red Horse” electric/neon sign atop the Magnolia Petroleum Building). I figured I’d get around to it eventually. And then I came across a couple of great Texlite ads, and it seemed like a good time to write about this important Dallas company.

There’s nothing all that special about this post, but I love glimpses into everyday life. I looked to see what sorts of generally uneventful things were going on in Dallas the day this photo was taken — the weather, news headlines, the movies playing downtown, etc. For instance, while these people were waiting in the Interurban Building’s Union Bus Depot to head off on a holiday weekend, 30 spontaneous grassfires were erupting around the very hot city.

I’m including three bonus posts which have personal meaning to me.

A little post about the interesting man who married my parents. 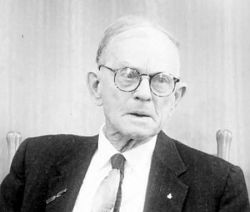 I come from a family of booksellers, and a scanned article on the city’s top bookstores linked to in this post features my father. 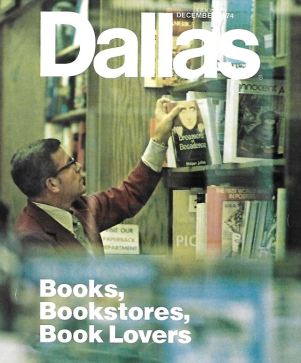 My late father was deeply interested in Texas history, especially the history of the Texas Rangers. I knew the name “Lone Wolf Gonzaullas” from childhood because my father talked about him a lot — most likely because the legendary lawman lived in Dallas, but I think he had also met him a time or two. I’ve been helping to catalog the old WFAA-TV news film held by SMU, and when I came across a clip from 1970 I was excited because 1) I had never heard Gonzaullas talk, and 2) because I knew my father would have loved to have seen it. So I wrote about Lone Wolf for my father.

Those were my favorite posts of 2020. Tomorrow… the most popular posts of the year.