I had never seen footage of legendary Texas Ranger Manuel T. “Lone Wolf” Gonzaullas (1891-1977) until now. There is a short clip of him recounting a run-in with a man who shot him in WFAA-Channel 8 footage from March, 1970 (filmed at the Southwest Historical Wax Museum in Fair Park). Gonzaullas was a long-time resident of Dallas, from 1923 until his death in 1977, living for much of that time in Lakewood, in the 6900 block of Westlake.

Here are a couple of screenshots from the news footage. In the first he is seen standing in front of his wax figure.

And in the second, he’s joking with WFAA-Channel 8 News reporter Phil Reynolds, who seems a little star-struck.

Below are a few random Lone Wolf-related photos and articles. (There are tons of histories of Gonzaullas and the Texas Rangers out there — please hunt them down for specifics on his long and respected career in law enforcement. These are just a few things that I found interesting, some of which are of no historical importance!)

The earliest newspaper mention of Gonzaullas I could find was about his participation in an El Paso-to-Phoenix automobile road race in 1919. Biographers have noted that the colorful Gonzaullas sometimes embellished the truth, especially about his early days, and it’s interesting to note that in coverage of this race, Gonzaullas was described as being a “noted European racing driver” who had previously won 32 first-place finishes and 92 second-place finishes (!). The car he had entered in the race was a Locomobile, which he was reported to have driven to El Paso from Atlantic City. He was also identified as being “a Cuban […] who first won his spurs on the Havana track” (his birthplace is usually said to be Spain, where he was born to naturalized American citizens who were visiting that country at the time). He told the papers he had been left with temporarily blindness and a permanently injured left arm in a previous auto accident — and another injury was about to come: he didn’t finish the El Paso-to-Phoenix race because his car suffered two debilitating mishaps, including one in which he was thrown from the car “and a blood vessel in his stomach was broken.” He was also said to be accompanied by “Mrs. Gonzaullas,” despite the fact that he did not marry Laura Scherer until April, 1920.

In December, 1919, Los Angeles newspapers reported that Mr. Gonzaullas, “who has gold mining interests in Mexico,” was in town, visiting from Havana. Accompanying him was “Mrs. Gonzaullas,” who was indulging in a shopping excursion. They were staying at the Hotel Stowell.

While at the Stowell (and about to return to Texas), Gonzaullas put a for-sale classified in the Los Angeles paper, saying that he “must sell within next 24 hours my beautiful combination 2 or 4 passenger Locomobile Roadster Special.” The Cuban’s racing days would seem to be ending.

Less than two weeks later — and a month after finally marrying Laura in California — the newly wed Gonzaullas was back in El Paso, looking for a “lost or strayed” pet monkey. It appears the monkey was found (…or replaced…), but in September the Gonzaullases were selling their little “Java monkey,” along with its cage and traveling case. M. T. became “Lone Wolf” after he joined the Texas Rangers in 1920. Perhaps a monkey was not considered an appropriate pet for a lawman. (This is my favorite weird and obscure “Lone Wolf” tidbit.) 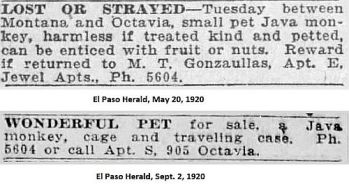 Gonzaullas was in and out of the Rangers throughout his career. In 1923, he moved to Dallas where he was stationed as a permanent prohibition agent (he busted a lot of booze-loving Dallasites).

In 1929, Gonzaullas was a sergeant in the Texas Rangers, and the photo below captured the first time that the men of Company B had all been together at the same time in the same place — in Fort Worth. The caption for this photo: “Texas’ Guardians, United After 10 Years. Capt. Tom R. Hickman, Gainesville, brought Ranger Company B together Friday for the first time in more than 10 years. Here they are just before visiting the Southwestern Exposition and Fat Stock Show. Left to right, W. H. Kirby, Abilene; H. B. Purvis, Lufkin; Captain Hickman; Sergt. M. T. Gonzaullas, Dallas; Dott E. Smith, Abilene; and James P. Huddleston, Dallas.” (Fort Worth Record-Telegram, March 16, 1929) (Read the full story, “Ranger Company B Rides In to Stock Show” here.) 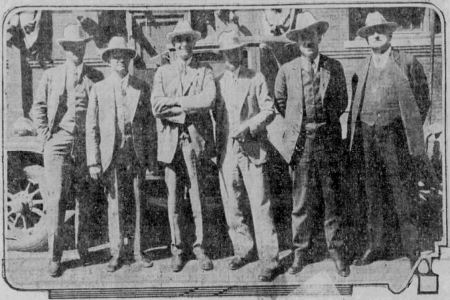 In 1933, the Texas Rangers were dissolved, later to re-emerge as part of the newly formed Department of Public Safety in 1935. Gonzaullas served for several years as the head of the DPS’s Bureau of Intelligence in Austin, a Texas version of the FBI. In 1940, he stepped down from that position to rejoin the Rangers. He took over command of his old Company B, which was stationed in Fair Park, and remained in that position for 11 years until his retirement.

In 1942, at the age of 50, Gonzaullas filled out a registration card during World War II, as all men were required to do. (A distinguishing physical characteristic of a “bullet hole thru left elbow” was noted.)

via findagrave.com (same photo without text is at Portal to Texas History)

Capt. Manuel Trazazas Gonzaullas retired in July, 1951 and traveled between Dallas and Hollywood where he worked as a consultant on Western TV shows and films. He died in Dallas on Feb. 13, 1977 at the age of 85. 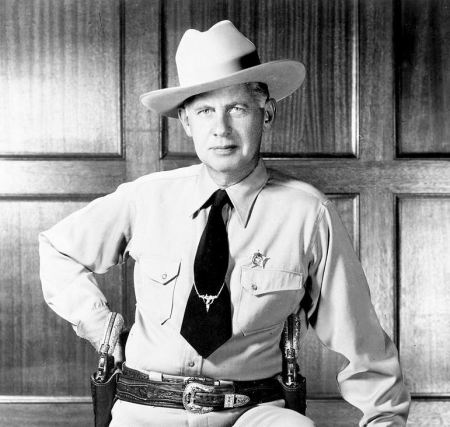 A brief biography of M. T. Gonzaullas can be found at the Handbook of Texas, here.

There were several comprehensive and entertaining articles and interviews which appeared around the country about Gonezaullas’ career when he retired. If you have access to newspaper archives, I would recommend the article “The ‘Lone Wolf’ Lays Down His Guns” by Don Hinga which appeared in The St. Louis Post-Dispatch on July 22, 1951.