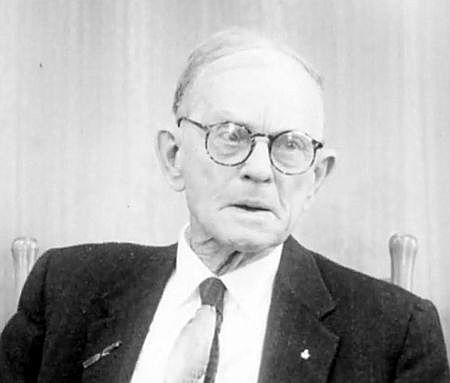 The Reverend Mr. W. W. Stogner (1873-1966) was something of a permanent fixture around the Dallas County Courthouse for a good 30 years. He was known as “the marrying preacher” who was Johnny-on-the-spot to marry any couple who had just obtained a marriage license and was in need of a man of the cloth. According to his own  estimation, he had married some 20,000 couples (!) — including my parents.

William Washington Stogner was born in Mississippi in 1873 and arrived in Dallas in 1907. Although he had preached since he was a teenager, he wasn’t ordained until he was 38 years old. He worked as a minister in Collin County and in Oklahoma for several years before returning to Dallas in 1926. From various newspaper reports, he appears to have set up shop as a marriage-focused pastor around 1935, roaming the hallways of the courthouse looking for newly licensed couples. (Detractors occasionally referred to him as the “Marryin’ Sam” of the Dallas County Courthouse, in a reference to the opportunistic character in the L’il Abner comic strip.)

In a 1960 Frank X. Tolbert profile in The Dallas Morning News, Rev. Stogner’s average workday went something like this:

He arrives at the Records Building each morning around 8 a.m. carrying a shopping bag in which are a Bible and much other reading matter. He often stations himself near the elevators leading to the County Clerk’s office, a good place to spot happy couples equipped with a marriage license but in need of a preacher. (Tolbert’s Texas, DMN, May 12, 1960)

In that article, the 88-year-old retired Baptist minister estimated he had, thus far, married 18,000 couples. Some he had encouraged to wait, not feeling they were ready, but most of them he joined together in holy matrimony. He said he married people in empty rooms of the courthouse — or even in hallways. He also married couples in his home in Oak Cliff (my parents were married in his home, having contacted him from information on a business card given to them by the good reverend after they had received their wedding license at the courthouse).

As he spent so much time at the courthouse, it’s no surprise that he conducted several  marriages right across the street in the jail. Like the comedy-of-errors wedding described in the story below (click for larger image):

The Rev. Mr. Stogner can be seen in a WBAP-Ch. 5 news clip from March 31, 1959 testifying in the court of Justice of the Peace W. E. Richburg in the trial concerning the falsification of documents in the marriage of an 18-year-old man to a 12-year-old girl (watch the silent clip here). Rev. Stogner looks a bit shell-shocked and testified that he thought the affidavit asserting the girl was 14 (and of legal age, with permission of a parent) was valid. It was not, and the marriage  was annulled. (The news script about this case can be read here.) You can’t win ’em all.

Rev. Stogner died in 1966, two days short of his 93rd birthday. Think about that for a second: he was born in Reconstruction Mississippi and died a year before “Sgt. Pepper’s Lonely Hearts Club Band.” It’s pretty amazing to realize that my parents were married by a man who could remember being alive in the 1870s!

Top image is a screen shot from the WBAP-Ch. 5 new clip “Court of Inquiry” from the KXAS-NBC 5 News Collection, UNT Libraries Special Collections, via the Portal to Texas History.

There is no film of the story about Rev. Stogner’s 90th birthday celebration at the Dallas County Courthouse, but the Feb. 12, 1963 script can be read at the Portal to Texas History here.