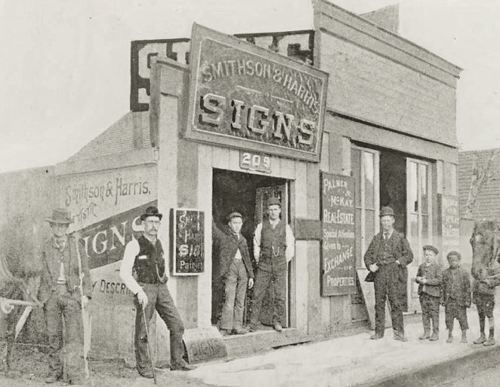 Above, a photo of Smithson & Harris, makers and painters of signs in the 1890s. The business — owned by Harry M. Smithson and W. H. Harris — was apparently at 209 S. Akard, which has been described as having been on the northeast corner of Akard and Commerce, later the site of the Magnolia Building. That address does not comport with 209 S. Akard as we know it today — that would be in the southwest block of S. Akard — south of Commerce and on the other side of the street. This is a sentence from Smithson’s obituary:

Mr. Smithson operated a sign-painting and furniture repair shop in a one-story frame building where the Magnolia Building now stands at the northeast corner of Akard and Commerce. — Dallas Morning News, May 1, 1936

Another source repeats the same info. Below is an excerpt from the small booklet Dallas’ First Hundred Years, 1856-1956 by George H. Santerre. I’m guessing Santerre got his info from the very same obit (and perhaps embellished the importance of the two businesses pictured).

In 1895 Dallas’ merchants obtained their large store signs from Smithson & Harris, whose one-story frame establishment […] facing on Akard was located on the northeast corner of Commerce and Akard streets, the present site of Dallas’ Magnolia Building. The real estate offices of Palmer & McKay, through which many of Dallas’ real estate transfers were handled, adjoined the sign-painters location.

As far as that last little nod to Palmer & McKay (John R. Palmer and James C. McKay), I could find their real estate partnership in only one Dallas directory — 1891, when their office was located at 296 Main. I have no 1890 directory to check, but Palmer left a previous place of employment in 1889. “Palmer & McKay” had disappeared from Dallas directories by 1892, so my guess is that the photo is from about 1890.

As far as the address being 209 S. Akard — Dallas has renumbered and renamed so many streets over the years that it’s hard to keep track of everything.

Dallas’ most prosperous and well-known sign-maker of this period was P. S. Borich. His shop was at 209 Sycamore (the street was later renamed N. Akard). But around 1890, “209 Sycamore” became, weirdly, 108 South Akard — right where the Magnolia Building was built. Borich was at 209 Sycamore/108 S. Akard until about 1900, when most of the individuals mentioned above had moved on to other professions. (You can see the confusing address numbering in the 1885 and 1892 Sanborn maps.)

So I’m not sure what’s going on in this photo of a building with the address “209.” 19th-century sublet?

(Incidentally, the Borich company eventually morphed into Texlite, the company that made Pegasus, the city’s symbol who lives atop, yes, the Magnolia Building. I wrote about Borich and Texlite in the post “Texlite, Borich, Pegasus.”)

“Smithson & Harris” and “Palmer & McKay” were both very short-lived partnerships, lasting only a year or two. Wherever these businesses were located, it’s a cool photo.

I first saw the (cropped) photo in the 1931 Rotunda, the yearbook of SMU, from the collection at the DeGolyer Library, SMU Libraries, Southern Methodist University, here.

5 Comments to “19th-Century Sign-Painting and Real-Estating”