Back in 2014 when I started this blog, this is one of the first photos I posted. It is one of those Dallas photos that can actually be described as “iconic”: a cowboy on horseback watches over a herd of cattle grazing just beyond a vibrant mid-century skyline — old Texas meets new Texas. The photo is by Dallas photographer William Langley, and, according to the Library of Congress, it was taken on August 20, 1945. I am posting it again today, August 20, 2020 — 75 years to the day it was taken.

So what was happening 75 years ago today? Here are a few stories from the newspaper.

Gen. Douglas MacArthur was heading to Japan (Hiroshima and Nagasaki had been bombed within the past two weeks, effectively ending the war).

Wartime restrictions on the use of natural gas were lifted by the War Production Board.

LBJ was being touted as a possible candidate for Texas governor.

Dallasites were chomping at the bit to bid farewell to the war-ordered Daylight Savings Time and return to Standard Time — they wanted go to bed when it was dark outside.

Annexation had meant that Dallas had increased in size over the past year from 51 square miles to 87 square miles.

Sgt. Jesse Curry, 31, of the Dallas Police Department, had been awarded a fellowship for an 18-week course in traffic administration at Northwestern University Traffic Institute in Chicago.

It was announced that improved trash pickup was on the horizon, as soon as new trucks became available.

War workers were being released from their war-work obligations, and the city’s businesses were beginning to hire, which was good news, except for many Dallas women who were still working but who were met with the announced closure of many “playschools” which were operated around the city on a 12-hour cycle to accommodate shift workers.

The Texas League announced they would resume minor league play in the spring.

Hockaday would increase its staff from 83 members to 100 for the upcoming school year.

“The Three Musketeers” was opening at the Starlight Operetta in Fair Park. The State Fair of Texas would not resume until 1946.

“Thrill of a Romance” — with Van Jones and Esther Williams — was at the Majestic.

“Pillow to Post”  — with Ida Lupino and Sydney Greenstreet — was at the Palace.

“The Story of G.I. Joe” — with Burgess Meredith and Robert Mitchum — was at the Tower.

“Asi Se Quiere en Jalisco” — with Jorge Negrete — was at the Panamericano.

Interstate Theaters declined to respond to the rumor that a soon-to-be-built theater in Galveston was to be equipped to show television broadcasts.

High temperature on the Monday Bill Langley took that photo was 92 degrees.

Photo by William Langley — titled “Skyline, Dallas, Texas” — is from the collection of the Library of Congress. Langley appears to have been positioned somewhere around the present-day Stemmons Corridor.

“Stemmons Tower with downtown Dallas, Texas in the background; photo taken at night,” by Squire Haskins, taken on April 19, 1963; from the Squire Haskins, Inc. Photography Collection, University of Texas at Arlington Libraries, Special Collections (more info on this photo can be found here).

The first of several “towers,” construction of Trammel Crow’s Stemmons Tower East began in the summer of 1961 and was open and leasing by December, 1962. This office complex was part of the grand vision of the Trinity Industrial District and the “Stemmons corridor” (click ad below to see a much larger image).

The Cabana Motor Hotel of Dallas

The Dallas Cabaña was actually the third in a proposed chain of hotels, following locations in Atlanta and Palo Alto. It even had some Hollywood star-power attached to it: Doris Day’s then-husband Marty Melcher was an investor in the company (turned out it was Doris’ money, and she wasn’t thrilled that he was investing so much of her money in this chain of hotels).

It was fab for a while — but the high point really was John, Paul, George, and Ringo. Before the ’60s had ended, the place was shuttered and mired in litigation. Melcher had died and left Doris $500,000 in debt. Ownership changed hands several times over the years, and each time, more and more of its original hep luster was lost. The building has never really recovered. For a few years it was a rather bizarre site for a minimum-security jail! In recent months it was announced that it has been acquired by the company that has recently renovated the long-moribund Statler Hilton — so there’s hope! It needs a lot of work, but it might actually turn out to be cool again.

Under construction, by William Langley, via Dallas Public Library

The postcard at the top is from the Texas History Collection, provided by Dallas Heritage Village to the Portal to Texas History, where I found it, here.

I have to admit that I’ve never really been a fan of this building until I saw this postcard. It’s like a Dallas version of a subdued Vegas hotel.

For more history of the Cabaña (…whenever I hear reporters in historic footage pronouncing the “n” in “cabana” with that tilde, it’s a bit jarring…), read the informative article “Lost + Found: Cabana Motor Hotel” by Preservation Dallas Executive Director David Preziosi on the AIA Dallas website, here. It’s got some great photos.

I think the 1950s Dallas skyline is my favorite Dallas skyline. This lithograph by Dallas artist Ed Bearden shows all the usual superstars — the Southland Life Building, the Medical Arts Building, the Republic Bank Building, the Mercantile, the Magnolia — but it also shows a building that doesn’t often find its way into artistic renderings of the city’s skyline: the Dallas Power & Light plant (which was demolished several years ago and is now the site of the American Airlines Center). It looks really great here, with its familiar twin steamstacks and its oasis-like “spray pond” shimmering in the foreground. In fact, the presence of the DP&L plant is my favorite element of this artwork. The beauty of that workhorse industrial plant gives those fancy skyscrapers a run for their money!

This same view from the Stemmons of today looks like — brace yourself — this.

Lithograph by Ed Bearden; image from an auction listing on the Live Auctioneers site, here. (Thanks, “Not Bob,” for alerting me to this great artwork!)

More on the cool-looking DP&L plant and its twin smokestacks can be found in these Flashback Dallas posts:

I have to admit that I’d never heard of anyplace in Dallas called Empire Central, but because I wanted to post the picture above (which I love) (and which is  from a 1959 ad), I felt I should at least look into finding out what and where it was and broaden my horizons a bit. So I did. It was (is?) an “office community” built in 1958 on 90 acres of land (later expanded), located in the “V” between Hwy. 77 (soon to be Stemmons Freeway) and Hwy. 183 (aka Empire Freeway, soon to be John W. Carpenter Freeway), with W. Mockingbird on the south and Dividend Drive on the north(-ish). It was developed as an office park as part of the already existing 1,200-acre Brook Hollow Industrial District (which, when its development began in 1953, was beyond the city limits) — both areas were developed by Windsor Properties. Empire Central was announced in 1957.

Unsurprisingly, almost every early newspaper story about plans for the new district mentioned what was considered to be its sexiest, most novel attraction: the Empire Club, an on-site dining and recreation club for employees — executives and underlings alike — who worked in the “community’s” office buildings. It was a round, 45,000-square-foot structure that sat on 9 acres and featured a distinctive roof which utilized 24 tamarack logs “more than 100 feet long, imported here especially for the club from the virgin forests of Washington” (DMN, Nov. 24, 1957). Its amenities included a sunken garden, a terraced dining room, lounge, swimming pool, putting green, and shuffleboard court, all nestled in a “garden-like atmosphere.” What a great perk!

The club was important in the conceptualization of the office park, as the developers insisted that a happy employee was a productive employee, as can be seen in the text from a 1959 advertisement which ran the week the club opened:

First was the realization that the company able to attract the most capable employees at a given wage would be most successful. Second, the urbanization of our population has created the need for a measure of community life.

The Empire Club, as the heart of Empire Central, is designed to accomplish both objectives for management.

And that club looked cool. It was a cutting-edge design from the always impressive George Dahl, one of Dallas’ top architects. (Dahl worked on several other projects with W. C. Windsor — Sr. and Jr. — including a prison (?!) and several other buildings in the Empire Central District.) Dahl’s previous big round building — Memorial Auditorium/Dallas Convention Center — had opened in 1957, just months before construction began on this unusual and sophisticated clubhouse, something one would certainly not expect to find plonked down in the middle of such prosaic surroundings. 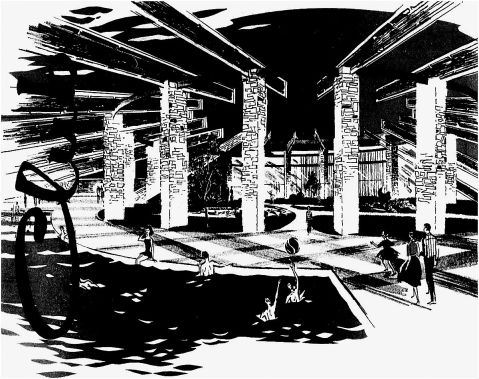 Below, the full ad, which appeared the week the new Empire Club opened in October, 1959 (click to see larger image): 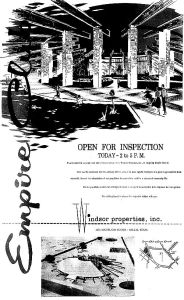 At some point (or maybe always) the club began to be used by outside groups. In the ’60s, it was the site of a lot of Junior League and debutante activities and dances. In 1966 the Empire Club became The Round House restaurant (in which could be found the Fatted Calf club). The last listing I could find of a restaurant or club at that address (which was, originally, 100 Empire Central Drive and, later, 1100 Empire Central Place) was in 1971. Sadly, that cool-looking building was torn down somewhere along the way. What a shame! I just discover a George Dahl-designed building I’d never seen — in a part of town I’d never heard of — and *poof*! … it’s gone. …At least I didn’t have time to get too attached.

Here’s a great photo from 1960 (click it — it’s really big) looking southeast toward downtown from about Regal Row (bridge in foreground), with the new and improved Carpenter Freeway/Hwy. 183 in the center, and Stemmons — coming in from the left — meeting it in the distance; the Mockingbird bridge is just beyond it, just above the point. The Empire Central district — in between Stemmons and Carpenter — looks kind of puny here. You  might have to squint, but you can see the brown, round Empire Club building in the center of the triangle. If you listen closely, you might be able to hear a Southwestern Drug Company secretary splashing happily in the heated pool. 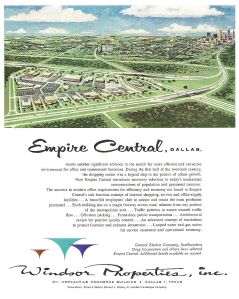 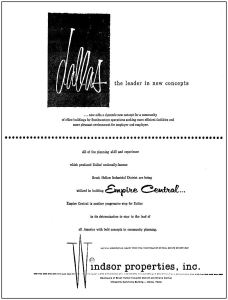 Top image is from a full-page magazine ad from 1958, found on eBay.

The 1960 photo appeared on the cover of Dallas magazine (October, 1960); I found it on the unbelievably thorough Dallas-Fort Worth Freeways site (main page is here, this photo is linked from here).

This area — what is it called? The consensus seems to be “Brook Hollow.” Or maybe “Stemmons Corridor” (the Wikipedia entry for the latter is here).

(Thank you, Dallas History Facebook group for the helpful tidbits!)